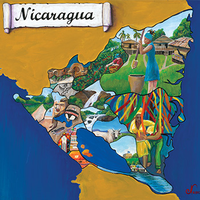 Mapmaking with fabrics and dances and sloths

Consider the map. We’ve all used one to get from point A to point B, to navigate the geography of the place in which we find ourselves. We also live in a world profoundly shaped by the arbitrary drawing of borders on colonial maps decades or centuries ago. But change the way you map the world around you, and you might see and hear and taste anew. That’s an idea that resonates with the Peace Corps community — which is why Hannah Engel-Rebitzer launched the World Maps Collaborative, through which she partners with mapmaking artists in a dozen countries to help them reach global audiences.

“Mixing traditional cartography with the abstract and experimental, our maps celebrate local culture and voices,” she writes. She served as a small business development Volunteer in Costa Rica 2010–12. That experience showed her the challenges artists faced in exporting their work.

She later lived in Malawi while her husband, Taylor Stearman, worked with the Peace Corps there. For the World Maps Collaborative, she partners with artists throughout Africa and Central America to show the interaction of modern life with much older boundaries — and how these interactions transform local languages, cultures, and traditions. It’s a cartography infused with a deeply personal and artistic relationship between people and place.

The artists featured here create their maps through painting, sketching, and digital media. Each artist receives a base commission for their work and receives a majority of the profits from each sale. The platform picked up momentum just before COVID-19 hit — providing support for artists when they needed it. Engel-Rebitzer is also interested in working with the Peace Corps network to broaden artist participation. 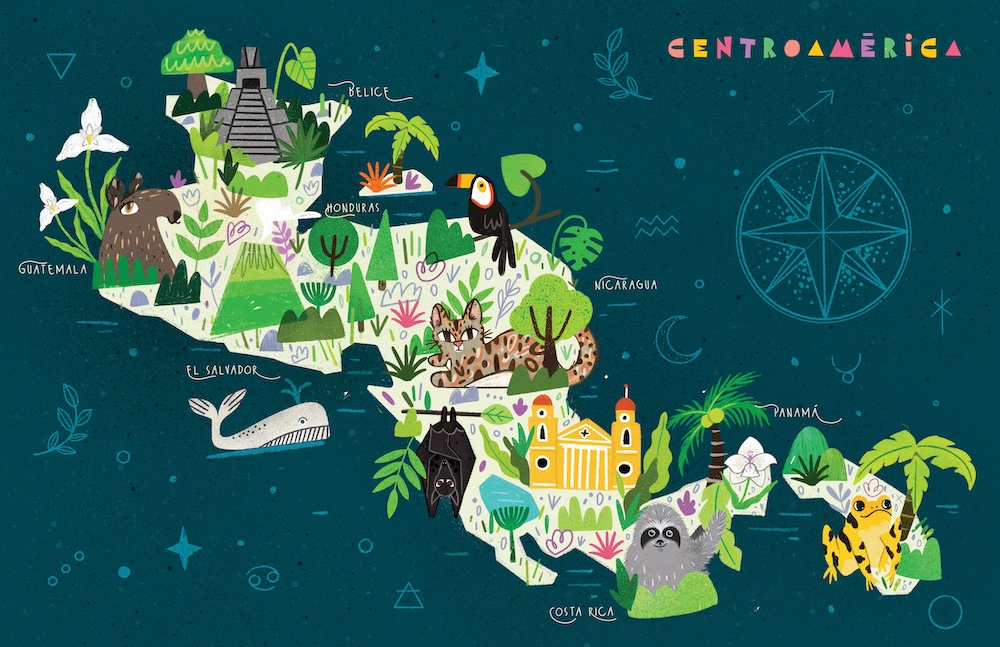 For a map of Central America, Carlos Violante and Alejandra Marroquin used hand-drawn sketches and bright colors and designs to highlight the rich diversity of the rainforests, jungles, beaches, mountains, and farmlands. Some animals featured—from toucans to tree frogs—are unfortunately at risk because of unsustainable hunting and fishing practices, deforestation, and climate change.

El Salvador is home for the two artists, who met at university, where both studied design. They run a studio, Delirio, and they share a deep love for their home and a respect for nature. For this map, “Our focus was mainly the biodiversity of the region,” Carlos says. “Even when the territory is not that big, it is home for thousands of species of plants and animals.”

Their artistic contributions feed off one another; the result here is truly playful. That matters, says Carlos. “There’s a new generation of artists, designers, and creative people in general that want to generate work inspired on their own culture instead of trying to replicate European and American aesthetics,” he says. “It feels fresh, authentic, and almost like a cultural re-vindication of those aspects of our identity that are looked down upon by the first world.” 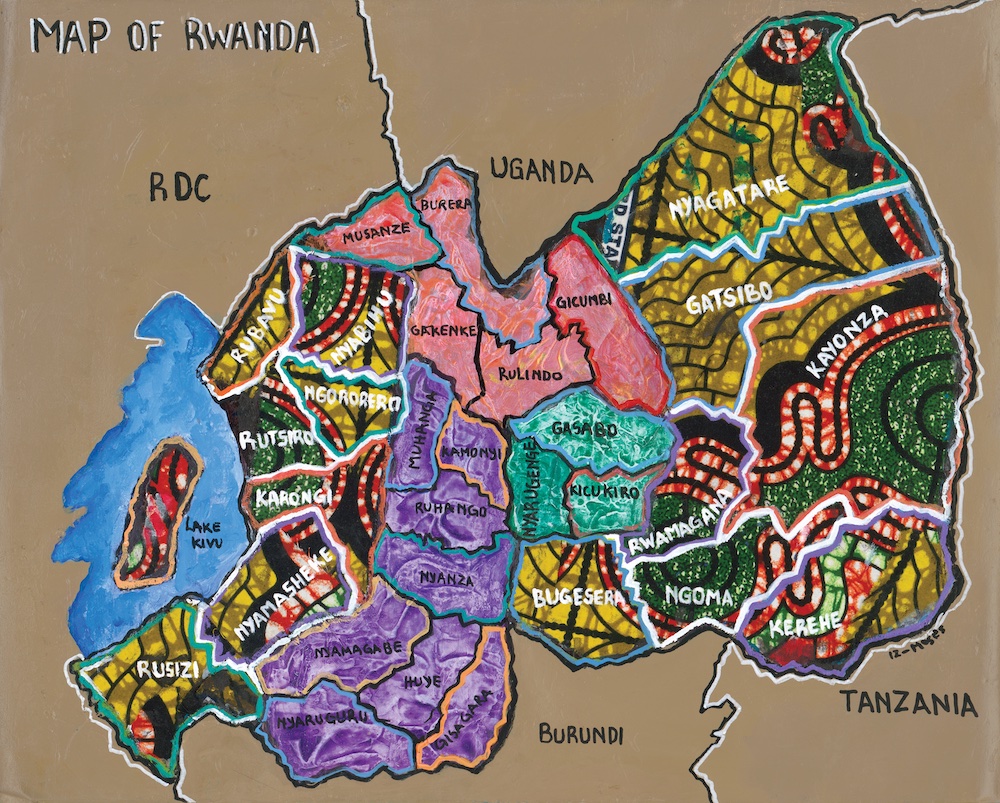 Izabiriza Moise believes in the power of storytelling to connect us. “Who we are as Rwandans and what [we’ve] been through” are central to his map, he says, which depicts Rwanda’s 30 districts using pieces of fabric and acrylic on canvas.

With this map and much of the work he does, Izabiriza Moise wants to show that his country is defined by far more than tragedy. “Whatever happens, we become again. We have a rich history and unity, and we are using what we have.”

Moise is largely a self-taught artist. With two friends, he founded Kuuru Art Space in the capital, Kigali. It is a place for young artists to experiment and receive support. Moise’s own community art projects include murals at orphanages and hospitals. In 2020, he participated in projects to support mental health with the University of Global Health Equity in Kigali. “If that art can heal me, it can heal others,” he says.

With this map and much of the work he does, he wants to show that his country is defined by far more than tragedy. “Whatever happens, we become again. We have a rich history and unity, and we are using what we have.” 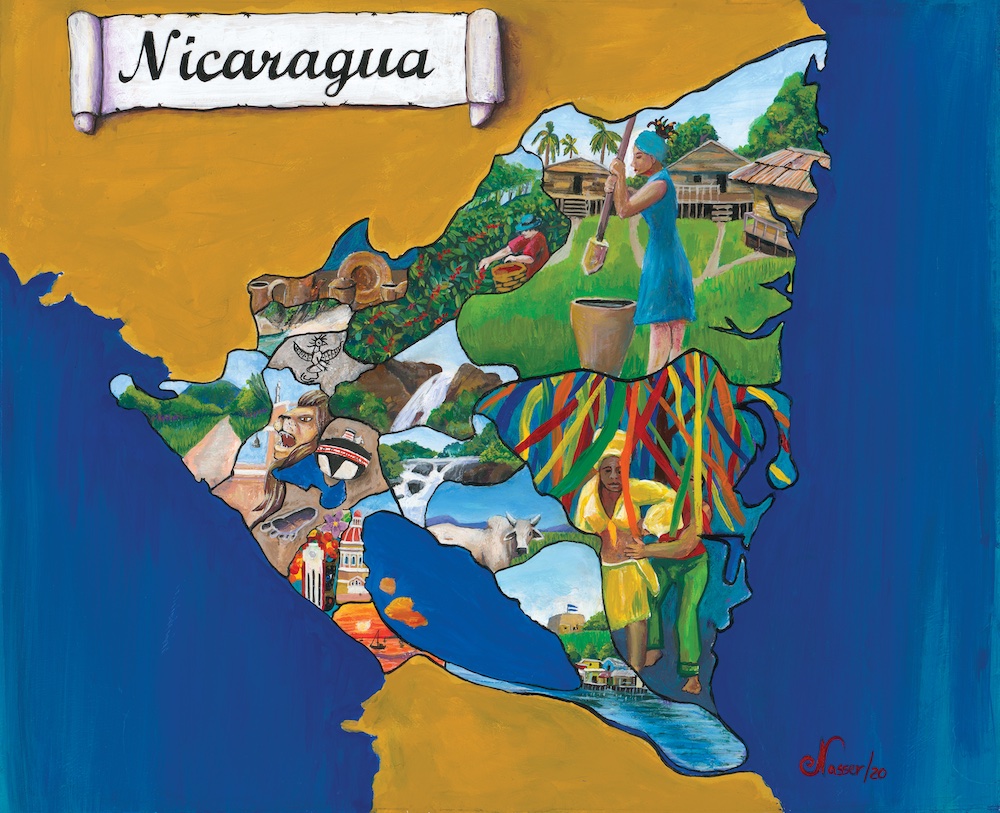 Nasser Mejia Moreno painted with acrylics on homemade paper to map places and cultural symbols in Nicaragua. “The social economy of my country is based on agriculture and tourism,” he says. “I tried to portray the places and activities that are associated with both locals and tourists.” The map becomes a place to connect visitors and those who call Nicaragua home.

Moreno did not have access to formal art education in the community of Granada, where he spent most of his early years, but he acquired skills through well-known artistic mentors and by studying art. And art by others is on display in this work, too — from dances to ceramics, making up some of the mosaic pieces of this map.

This story appears in the Spring-Summer 2022 edition of WorldView magazine. Story updated September 9, 2022.

Nathalie Vadnais served as an intern with WorldView 2021–22. She is studying international relations at Virginia Commonwealth University.