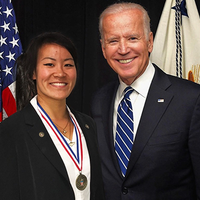 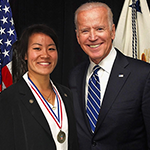 In August, Maggie Eckerson (2019–20) was awarded two United States Presidential Volunteer Service Awards and the President’s Lifetime Achievement Award because of her service in the Peace Corps and AmeriCorps. Eckerson was serving with the Peace Corps in Belize but had to leave when all Volunteers were brought home because of the COVID-19 pandemic. She began serving with AmeriCorps in summer 2020, working in the National Civilian Community Corps program and then Volunteers in Service to America (VISTA). For the President’s Lifetime Achievement Award, one must contribute more than 4,000 hours of service in their lifetime. Eckerson was able to achieve this goal through her work in the AmeriCorps in her Independent Service Projects and the year she spent working with The Catholic University of America during her second year with the AmeriCorps. During her time with the Catholic University of America, Eckerson led a program mentoring middle school students to prepare them for college. 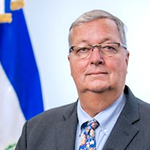 Chris Cushing (1981–84) was appointed the Mission Director to USAID El Salvador in August, overseeing bilateral and regional programs in Central America and Mexico. For nearly a decade, Cushing has served in several leadership roles within USAID, such as Mission Director in Ecuador as well as the Barbados-based USAID Eastern and Southern Caribbean Mission before assuming the same role at USAID Haiti from February 2020 to May 2022. Weeks after being sworn into his role in Haiti, Cushing rolled up his sleeves to work with the people of Haiti through the COVID pandemic shutdown, a president assassination, and a devastating earthquake that killed over 2,000 people. During the earthquake in 2021, Cushing coordinated the dispatch of search and rescue teams to communities in southern Haiti at the epicenter of the earthquake. “El Salvador, as we know, has its own significant challenges: a lack of economic opportunity coupled with significant violent crime, including some of the highest rates of femicide in the world,” said USAID Administrator Samantha Power during Cushing’s swearing-in ceremony in August. “[Cushing] has quite the task ahead of him, but I know he is up for it. His caring spirit and caretaker mindset bring reassurance and solace to those around him.” 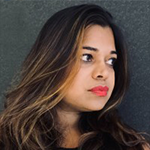 Maryam Saifee (2000–02) became a Council on Foreign Relations life member in June. The Council on Foreign Relations is a prestigious membership, including over 5,000 prominent leaders in the foreign policy arena. For more than a decade, Saifee has worked with the U.S. Department of State. She is currently serving as a senior advisor in the Secretary’s Office of Diversity and Inclusion. Prior to embarking on her career within the U.S. Foreign Service, Saifee was a consultant for the Ford Foundation, designing outreach and recruitment strategy for senior staff in Ford’s human rights, asset-building, and reproductive rights portfolios. After completing her Peace Corps service in Jordan, she served with AmeriCorps and supported South Asian survivors of domestic violence. In 2016, Saifee published an opinion piece in The Guardian sharing her personal story as a survivor of female genital cutting. 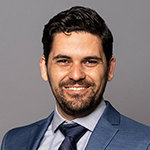 Josh Josa (2010–12) was honored with the Samuel J. Heyman Service to America Medal, an honor reserved for the most innovative and exceptional federal workers. As a member of the Deaf community and a first-generation Hungarian-American, Josa’s commitment to equity and inclusion in education is fueled by his first-hand experience with the stigma, barriers, and lack of resources students with disabilities face in school. While working as an inclusive education specialist at the U.S. Agency for International Development, Josa has sought to design and implement programs delivering quality, equitable, and inclusive education to all children and youth. He has worked tirelessly to advance educational inclusivity for students with disabilities, whether it be in Morocco, Kenya, or the United States. 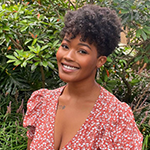 Quintella Cobb (2019–20) took on a new role as Wellness Educator at the University of Nevada, Las Vegas, beginning in September. She had been serving as a health promotion specialist at Tulane University. With the Peace Corps, Cobb served as an HIV/AIDS and Adolescent Health Volunteer. In March 2020, she and all other Volunteers were brought home because of COVID-19. 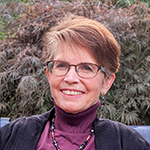 Katie Baird (1984–87) published a new memoir, Growing Mangos in the Desert, chronicling her Peace Corps service in a Mauritanian village during a catastrophic drought and the relationships and change she nurtured over the four decades that followed. Baird is a professor of economics at the University of Washington in Tacoma. With expertise in public economics and public policy, Baird worked for policy organizations in Washington, D.C., and Cambridge, Massachusetts, before embarking on her career in academia. For three years, she was a public affairs columnist for The News Tribune in Tacoma. 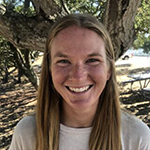 Bridget Mulkerin (2018–20) became the California Cone Corps Manager at American Forests, a nationwide nonprofit committed to protecting and restoring healthy forest ecosystems. Mulkerin’s responsibilities will involve building capacity of cone collection and creating resilient forests across California. Mulkerin served in Peace Corps Senegal, focusing on agroforestry. Her Peace Corps service fueled her interest in pursuing a master’s in international environmental policy from Middlebury Institute of International Studies at Monterey. “From a young age, I enjoyed exploring the woods behind my childhood home,” says Mulkerin when discussing why she is grateful for her job at American Forests. “As I got older, I appreciated the opportunities I had to travel and explore forests all over the world. Further understanding forest ecosystems and the services they provide for all life; I have been driven to protect them.” 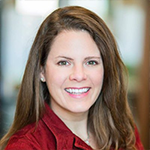 Amy Runyon Harms (1997–2000) has been appointed Senior Vice President of Operations and Strategy at Inseparable — an advocacy nonprofit championing for mental health policies that help the U.S. heal and thrive. Harms brings to the role over 20 years of direct service, foundation, and advocacy experience, including directorial positions at The Gill Foundation, ProgressNow Colorado, and Planned Parenthood of the Rocky Mountains (PPRM). During her time with PPRM, Harms served as director of political outreach and focused on electing political supporters of pro-family planning policies, comprehensive sex education, and full access to women’s reproductive health care. 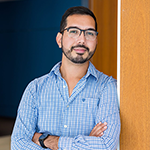 Mario Lopez-Rodriguez (2019–20) is completing a master’s in public health at Emory University. With the Peace Corps, he served as a community health extension officer in the village of Kidogozero. “My service as a Peace Corps volunteer helped define my passion for global health,” he said in a recent interview. “It allowed me the opportunity to learn, live and work with a community that I wouldn’t have interacted with otherwise. It also taught me the importance of cultural humility and putting effort into learning about the communities I seek to serve.” Born in the Mexican state of Tamaulipas in 1993, Lopez-Rodriguez emigrated to Tennessee with his family in 2000. He completed a bachelor’s in nursing at the University of Memphis. 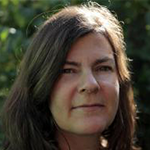 Sabra Ayres (1995–97) was named Chief Correspondent for Ukraine at The Associated Press (AP) last month. In this new role, Ayres will manage and coordinate AP’s all-format coverage of Ukraine, including text, photography, and video storytelling. Ayres has nearly two decades of reporting that covered U.S. state and national politics, international relations, and developing democracies — with bylines from Ukraine, Russia, Afghanistan, Europe and India. Ayres was the 2016 recipient of the Front Page Marie Colvin Award for Best Foreign Correspondence for her coverage of Ukraine and Europe’s migrant crisis. She also taught journalism at the American University of Afghanistan in Kabul and worked as a visiting professor at the India Institute of Journalism and New Media in Bangalore.