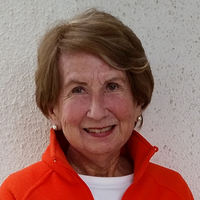 As a lifelong Volunteer, she served as a steady beacon of Peace Corps ideals. And her commitment to the Peace Corps community and desire to create a positive experience for RPCVs will be remembered as part of her enduring legacy.

With heavy hearts, we announce that Mary Broude, who served as a Peace Corps Volunteer in Korea 1969–70, passed away last week on Tuesday, November 8. She devoted decades to supporting returned Volunteers and Peace Corps ideals: as a board member of the NPCA affiliate group Friends of Korea (FoK), as co-founder of the Orange County Peace Corps Association, and as a board of director of National Peace Corps Association — where she served for more than two years and was considered one of the most generous board members by those who had the honor to work closely with her.

“Mary always focused on how board efforts were contributing to the big picture of NPCA's mission” —Dan Baker, NPCA Interim President and CEO

“Mary always focused on how board efforts were contributing to the big picture of NPCA's mission,” said NPCA’s Interim President and CEO Dan Baker. “Personally, Mary provided a light and empathy during challenging times, and I would not be in my current leadership role of Interim President and CEO without her support and encouragement. While I will miss her dearly, I will always remember and celebrate what she meant to NPCA and our staff.” 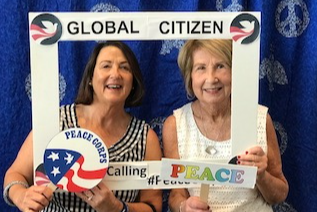 She grew up on a North Dakota farm where she learned, at an early age, that world affairs and events can significantly impact whether it’s a “good” or “bad” year on the farm. This exposure fueled her curiosity to learn and experience as much of the world as possible. After gaining her bachelor's from St. Olaf College, her curiosity led her to Peace Corps Korea, where she taught English at Seoul National University. It was soon clear the world was small when two of her students, after finishing their studies with her in Seoul, became students in her Dad’s classroom at North Dakota State University a few months later.

Upon returning to the U.S., Mary taught high school German in Minneapolis before moving to Southern California. She transitioned her career to roles in Organization Development and Management Training at The Walt Disney Company and later in healthcare organizations. She also consulted for medical device start-up companies. Along the way, she completed a master’s in educational administration at California State University (CSU) in Fullerton and a MBA at the University of California (UC) in Irvine. She was also an adjunct lecturer at CSU Long Beach and the University of Phoenix. 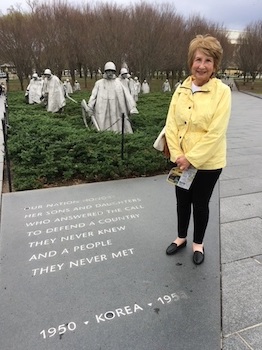 Mary's experience as a Volunteer in Korea had a lasting impact on the community she served, and her commitment did not end when she came home. She was the epitome of a global citizen whose passion for friendship and peace could be seen in the organizations and causes she rallied for and supported. In 2012, Mary took on a leadership position as an FoK board member, making tremendous impact at home and abroad, such as helping to staff the 2013 U.S. Peace Corps Volunteers' Revisit to Korea trip — a program hosted by the government of the Republic of Korea and the Korea Foundation — which welcomed 55 RPCVs and their accompanying family members for a week-long experience in Seoul. Along with her fellow FoK board members, she also met Consul General Key Cheol Lee in the summer of 2016 to further enhance cooperation between the Consulate and FoK as well as share FoK activities, which included the Peace Corps Korea 50th Anniversary Exhibit at the National Museum of Korean Contemporary History in Seoul that same year.

Beyond her FoK efforts, Mary served on the leadership council for UC Irvine's Center for Critical Korean Studies, launched to promote Korean language learning, critical thinking about Korea’s relationship to the Pacific Rim region and throughout the world, and a deeper historical understanding of Korea. Also, she co-founded the Orange County Peace Corps Association, where she was considered the backbone for the local RPCV community, and she was an active supporter of Dining for Women, a women’s giving circle dedicated to ensuring gender equality and ending extreme poverty by investing in women and girls in the developing world.

“A philanthropist who put her values into action, she was one of the most generous board members – both of her money and time. Mary joined the board because of her deep commitment to the values of NPCA and her desire to create a positive experience for RPCVs.” —Jeffrey Janis, NPCA Board Member

As a NPCA board member, Mary served as a steady beacon of Peace Corps ideals and champion of NPCA's mission, participating in a number of NPCA committees from fundraising to governance. “Mary and I joined the NPCA board at the same time – about two and a half years ago,” said NPCA Board Member Jeffrey Janis. “A philanthropist who put her values into action, she was one of the most generous board members – both of her money and time. Mary joined the board because of her deep commitment to the values of NPCA and her desire to create a positive experience for RPCVs.” 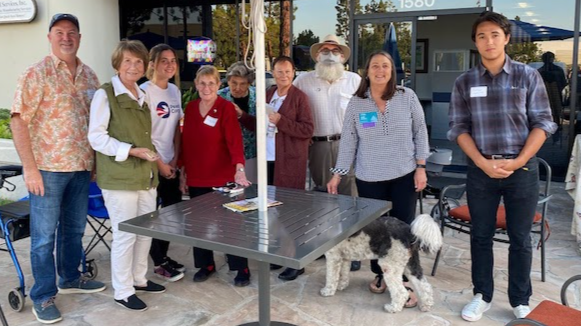 A Remembrance: Voices from the Peace Corps Community

Mary Broude's enduring legacy deeply touched the Peace Corps community for years, and we would like to use this space below to express our condolences and share fond memories about the life and contributions of this beloved Peace Corps champion.

John Lee Evans, NPCA Board Chair | Mary was a wonderful colleague on the board. She was very supportive of me in my new role, reaching out on a personal level to say kind words and offer help. She will be missed.

Dan Baker, NPCA Interim President & CEO | Mary was a particularly active member of the NPCA Board of Directors, and very engaged in the governance committee and recent efforts to push through governance improvements to the NPCA governance structure. Recently, she pushed for and facilitated excellent improvements for new board director orientation – empowering NPCA staff to inform and educate the Board about NPCA programs and operations. During a very difficult year for NPCA, full of leadership transitions and challenges, Mary prioritized the needs of NPCA staff. Mary always focused on how board efforts were contributing to the big picture of NPCA's mission. Personally, Mary provided a light and empathy during challenging times, and I would not be in my current leadership role of Interim President and CEO without her support and encouragement. While I will miss her dearly, I will always remember and celebrate what she meant to NPCA and our staff.

Jeffrey Janis, NPCA Board Member | Mary had a strong moral compass and wasn’t afraid to speak her mind and let people know exactly how she felt. I always admired her inner strength and pursuit for what she felt was right. Mary and I joined the NPCA board at the same time – about two and a half years ago. A philanthropist who put her values into action, she was one of the most generous board members – both of her money and time. Mary joined the board because of her deep commitment to the values of NPCA and her desire to create a positive experience for RPCVs. We worked together on countless projects and would speak (or text) at least once a week. Mary was my friend and my confidant. And I will miss her greatly.

Glenn Blumhorst | I have such fond memories of Mary. She graciously hosted me at her home during my trips to the Los Angeles area and helped organize local events for my visits, while also joining us in Washington, D.C., for our Capitol Hill Advocacy Day and Shriver Leadership Summit. Mary embodied Peace Corps ideals of empathy, kindness, and compassion, and was a friend to everyone she met. Her passing is a tremendous loss for the Peace Corps family and the many people whose lives she touched throughout her journey. I will miss Mary — her zeal and passion for friendship and peace having been such an inspiration to me over the years.

Terri Elders | Since I moved back to Southern California in 2014, I've looked forward to seeing Mary at the third Friday OCPCA Happy Hours, whether they were at a Mexican restaurant in Orange or a pizza place in Irvine. Even when the pandemic kept us separated, Mary arranged for us to Zoom monthly, so we could continue to share our Peace Corps experiences. Because of this, we were able to welcome evacuated PCVs who had been settled in our community. When it was safe enough to travel in vehicles with other passengers again, Mary offered to carpool with me to certain events, since I have limited mobility these days and rely on a walker. Furthermore, she volunteered to accompany me when I needed a designated driver for a medical procedure. A bona fide Volunteer to the end! I miss her terribly already!

Judy Greenspon | The Los Angeles Korean Consulate has honored Mary with distinction on many occasions. I observed the most beautiful large frame certificate of appreciation from the Korean Consulate sitting on her piano. She was a compassionate philanthropist, feisty political activist and loved to support first generation aspiring college students. Mary gave generously of her time on nonprofit boards and to many causes especially those supporting women, girls, and orphans. She was a dear friend to many RPCVs, and the OCPCA affiliate group has lost our shining star – may her spirit live on in everyone who was blessed to know her.

Friends of Korea (Facebook Post link) | It is with deep sadness that we announce that Mary Broude (seen on the left with Angie Pak and Brent Burkholder at the FoK 2019 annual meeting) passed away last week. Mary was a returned Peace Corps Korea volunteer (K-7) and indefatigable volunteer. She served on the FoK Board of Directors, the NPCA Board and was active in many other organizations in the Orange County area. She was actively engaged in many philanthropic activities as well. Mary was generous with her time and always willing to take on a challenge. She will be missed.