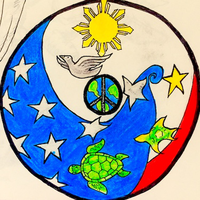 When Diane Glover arrived in the Philippines in July 2018, it was a sort of homecoming — to the country where she was born and left at age 11. She was raised by her older sister in Washington state and Georgia. “So many people invested in my success,” she says. Returning that investment seemed natural; empowering girls is something she cares about deeply — especially survivors of sexual violence.

She was a youth development Volunteer in Tacloban City on the island of Leyte. She worked with dozens of street children. One effort was the “skateboarding project,” which rented out skateboards — but not for money. The goal was to get kids into the community office and help them learn. Every minute they participated in reading, writing, or gardening bought a minute of skateboarding. The work taught Glover patience: “I can’t necessarily say, ‘I transformed six lives today.’ Most of the time our success — we don’t see that until down the road.”

“I can’t necessarily say, ‘I transformed six lives today.’ Most of the time our success — we don’t see that until down the road.” 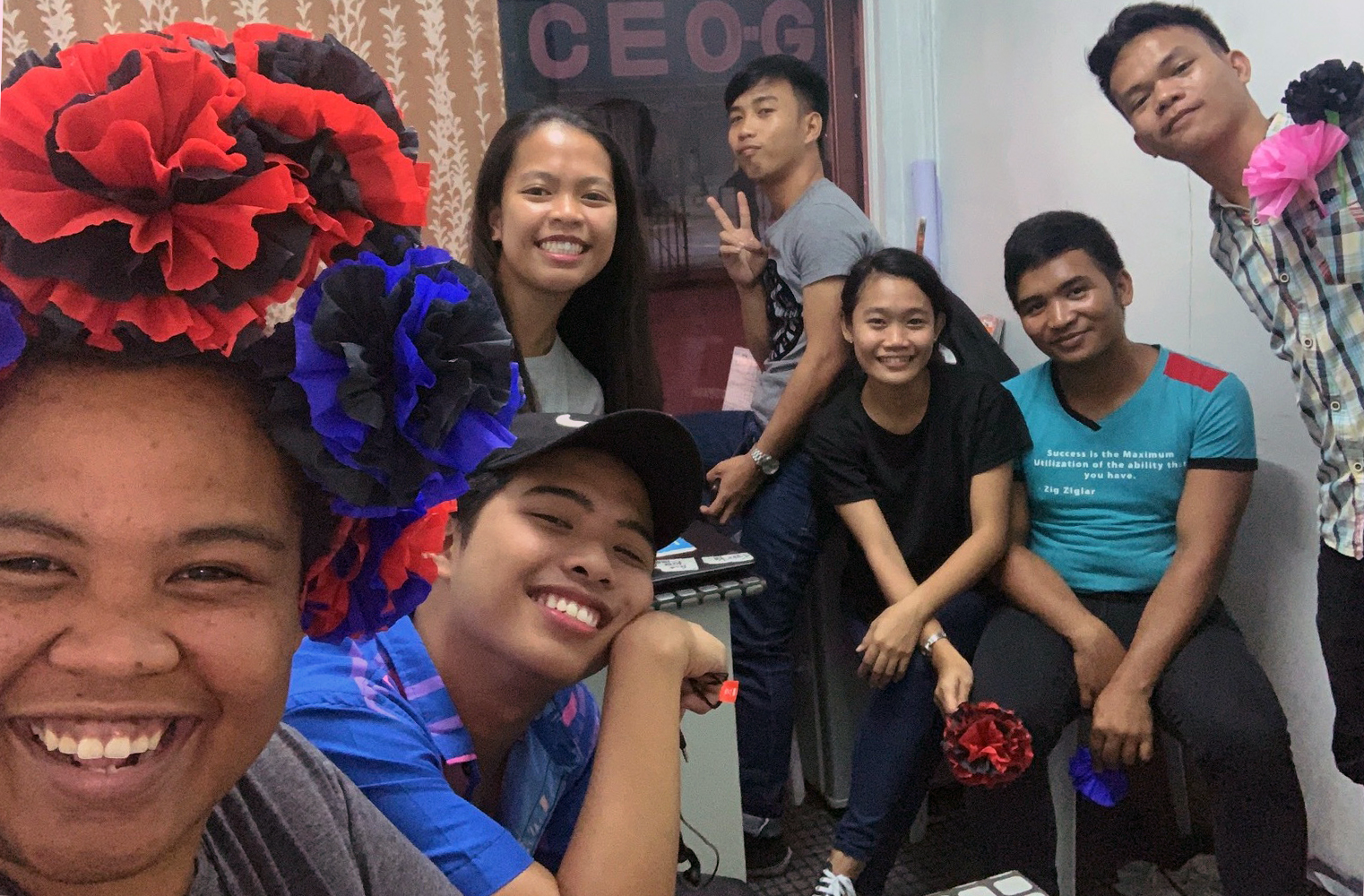 Investing in their success: Diane Glover, left, with kids in Tacloban City. Photo by Diane Glover

With six months left, she was worried about cutting it close with the terms of a grant. There was another project proposal — and wouldn’t it be good to extend for a third year? Then came the email.

The islands of the Philippines are scattered over hundreds of miles; evacuation was decentralized. Peace Corps staff flew from Manila to Cebu City to ensure that Volunteers consolidating there got home safely. “They just wanted to support their Volunteers till the very end.”

Crisis brought home a new lesson: Stop worrying about grants and project deadlines. “The evacuation has given us a snap of realization: Your relationship is your success—the relationship that you create in your community.” Yet suddenly that was gone. 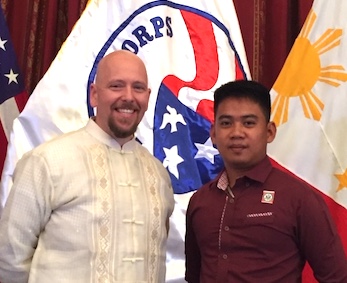 I met Nibarie Nicolas just before our swearing-in ceremony in Manila. I knew him as Ban2x (Ban-Ban). He’s mid-twenties, full of energy, curiosity, and infectious joy. He had recently been hired as fisheries technician for the Municipal Office of San Jose in the Visayas region. He was responsible for local marine resources, programs, and events. He was passionate about working with local fisherfolk. And he was assigned to be my counterpart.

I served as a Volunteer in Moldova (2005–08) and worked as a recruiter for Peace Corps before my wife, Genevieve, and I went back as Volunteers in Philippines. I supported Ban2x in his projects: developing a guardhouse for our marine sanctuary, programs for fisherfolk, agro-tourism events, and education about marine resources.

Within minutes of us meeting, Ban2x asked if I liked dragonboating. I had a vague familiarity; I’m an avid whitewater kayaker. He had assembled a dragonboat team from the fisherfolk communities; he was drummer and captain. They had never paddled before as a team, but they spent days and nights on the water in canoes they call sakayans, fishing the Tañon Strait. They borrowed a boat for their first race and blew the competition out of the water.

Dragonboating became a major part of my life. After a day in the office working on marine policies or presentations, Ban2x and I headed to practice. We paddled until sunset, then sat on the beach and watched stars reclaim the sky. We shared thoughts and dreams and life lessons. We ended each night with traditional goodbyes in Binisayan: “Kitakits”—which isn’t so much “goodbye” as “Until we see each other again.” 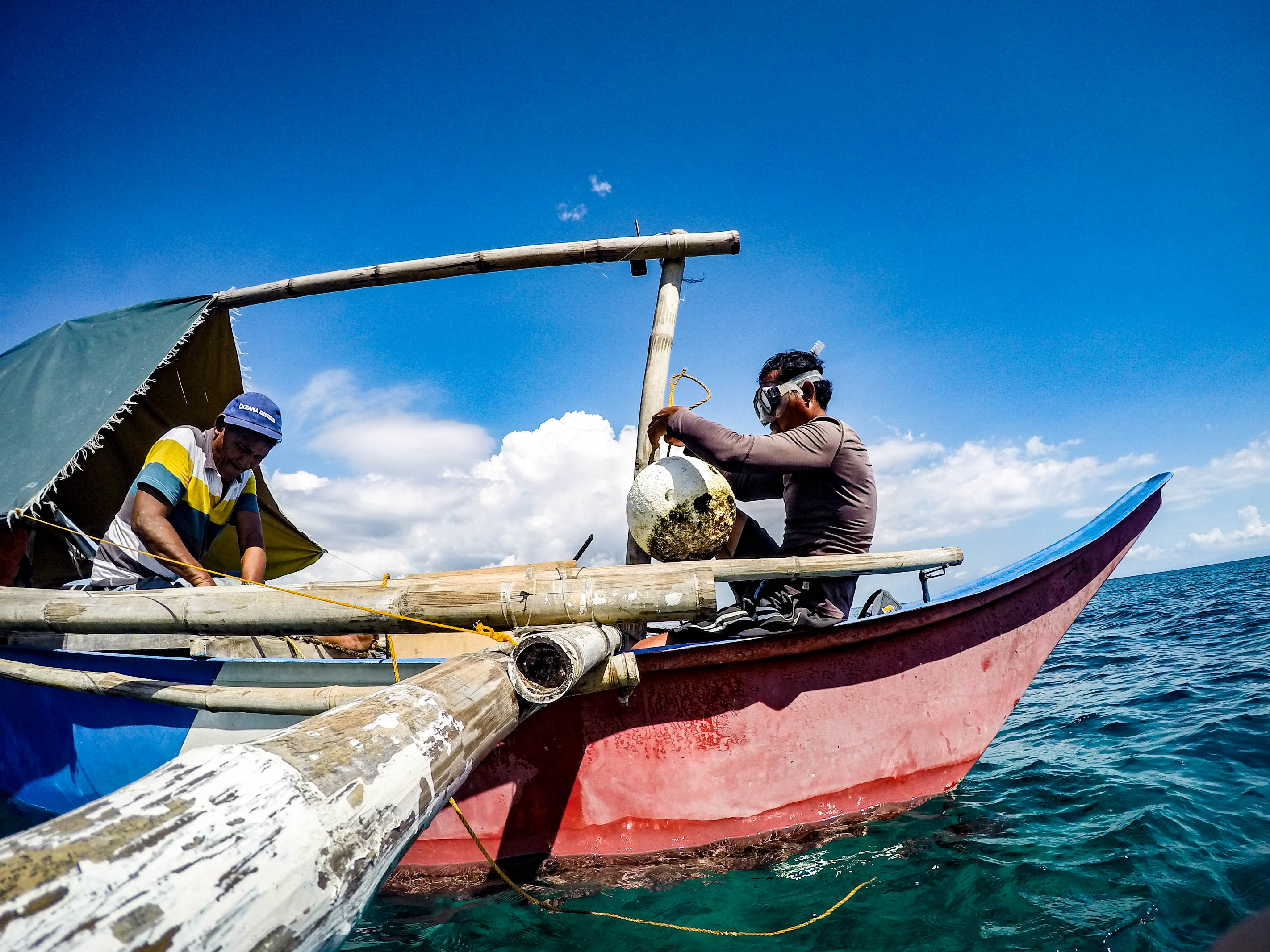 Genevieve became fast friends with Ban2x’s grandmother. We attended birthday parties and fiestas with his family. He took time to walk me through basic introductions, made sure I knew how to dress for various occasions, who to thank. While he was tasked with protection of the park, he had never donned SCUBA gear to see it underwater. So I arranged for him to get his diving certifications. Our first dive we saw lobsters, turtles, sharks, and stunning coral formations. When we surfaced, I saw the wonder in his eyes.

We created plans for coastal resource management and a marine protected area. We had big ideas for 2020. As January ended and news of the virus spread, we intensified our work. February rolled in fast. March, I could see the writing on the wall. I tried to wrap up projects and spoke with Ban2x at length about what needed to happen professionally if Genevieve and I left. 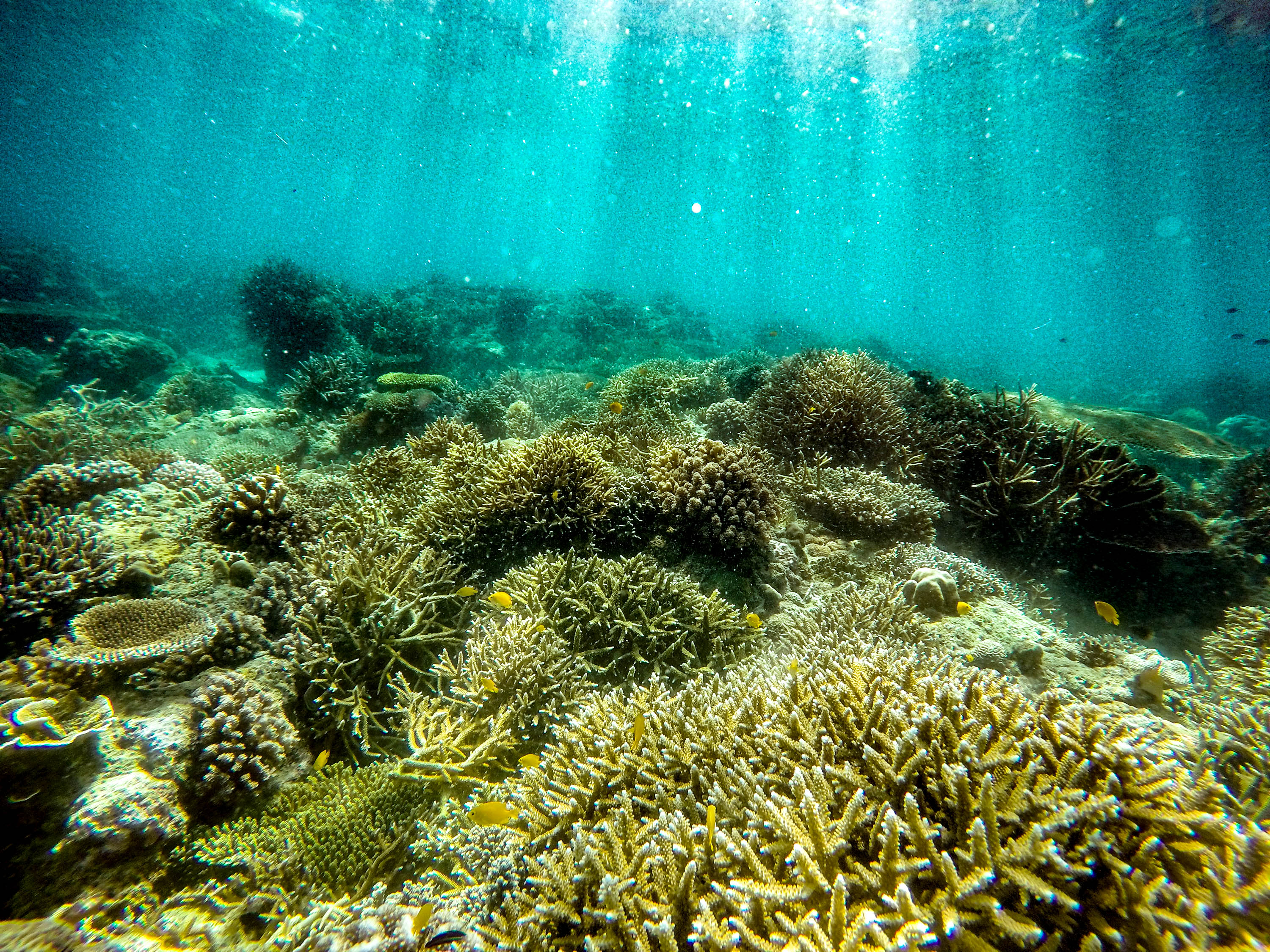 “When we surfaced, I saw the wonder in his eyes.” Photo by Rok Locksley

The first week in March we went on lockdown. I talked with Ban2x about evacuation. He wasn’t worried. Peace Corps evacuated us in 2019 to Manila when a typhoon came close. We returned a week later. When we got the call for consolidation in mid-March, I knew it would be the end of my service. I asked Ban2x to come over.

He arrived in his usual chipper demeanor. We talked on the porch, then I brought him into the house and started pointing out things he could take, what to give to the fisherfolk. After I showed him our bicycles, it registered on his face that we were truly leaving.

I firmly believe that one-to-one relationships built at a grassroots level between people who are fundamentally different is the best pathway to world peace. But I forgot how much it hurts to leave your friends.

When people talk about Peace Corps, they are quick to mention Volunteers and service. Maybe they get around to speaking about the three goals or cultural exchange. Most people forget about the actual mission of the agency: world peace and friendship. I firmly believe that one-to-one relationships built at a grassroots level between people who are fundamentally different is the best pathway to world peace. But I forgot how much it hurts to leave your friends.

Ban2x showed up at our house early the next day. He brought his family car to shuttle us to the seaport. We were on the last boat out. We loaded our bags. He pledged to look after our dog. We hung around the port until the last possible minute. Then I grabbed my dragonboat paddle and turned for one last look at my best friend. “It’s not goodbye,” I said, “just until we see each other again.” 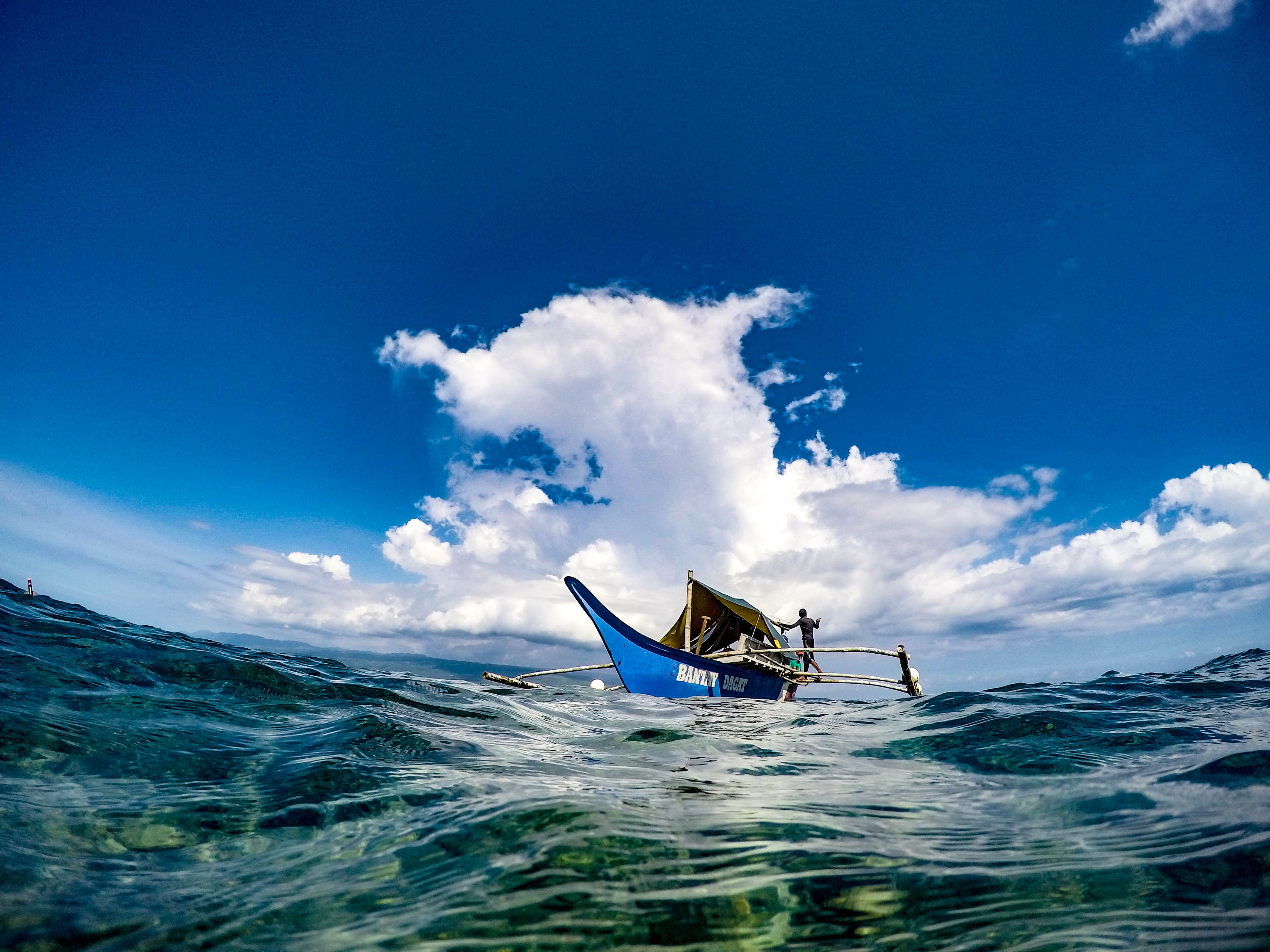