Volunteers in the House 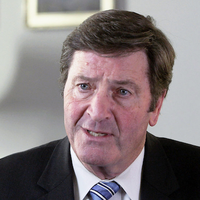 The 2020 congressional elections mark the end of an era for Peace Corps in Congress: Now there’s only one. And he is working on new legislation to support and improve the Peace Corps.

The 2020 congressional elections mark the end of an era for Peace Corps in Congress: Since 1975, at least two returned Volunteers served simultaneously in the halls of Congress. Until now.

Rep. John Garamendi (D-CA), who served as a Volunteer in Ethiopia 1966–68, was reelected with a relatively comfortable victory, securing 58 percent of the vote in California’s Third District. But he’s the sole RPCV to return.

Joe Kennedy III (D-MA), who served as a Volunteer in Dominican Republic 2004–06 and in the House since 2012, lost a primary bid for U.S. Senate. His departure marks the end of another era: Since 1947, a Kennedy has had a seat in Congress, with only two brief interruptions. The first, Joe Kennedy’s great-uncle John F. Kennedy, created the Peace Corps by executive order in March 1961.

Congressman Garamendi is in the process of updating and reintroducing comprehensive legislation to support and improve the Peace Corps. The legislation is expected to be introduced in the coming weeks. He introduced the Peace Corps Reauthorization Act of 2019 (H.R.3456), with bipartisan support, in the last session of Congress.

In introducing the bill, Garamendi said, “My wife Patti and I owe so much to our service in the Peace Corps. It inspired a lifetime of service that began in Ethiopia during the late 1960s and continued into state government in California, the Clinton Administration, and now the U.S. Congress. Now more than ever, Congress must support the Peace Corps’ mission and realize President Kennedy’s vision of generations of young Americans ready to serve their nation and make the world a better place. Our reauthorization bill does exactly that, and I thank my fellow Peace Corps Caucus co-chairs and Congressional colleagues for their support as original cosponsors.”

That bill did not come to a vote. Read more about it here.

The evacuation of all Volunteers from posts around the world in March 2020 has changed the landscape for Peace Corps. And as the community-driven report Peace Corps Connect to the Future stakes out, this is a time to retool and reshape the agency. The report contains recommendations for Congress, the Executive Branch and the agency, as well as the wider Peace Corps community. Garamendi and others have been briefed on those recommendations.

Here are more legislative updates regarding the Peace Corps community.