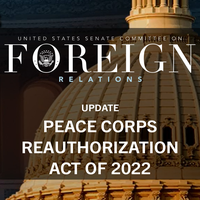 Less than a month after its introduction, members of the Senate Foreign Relations Committee advance major legislation — with broad, bipartisan support — to further reform and improve the Peace Corps.

As noted by Chairman Menendez in a July 19 press release, “this once-in-a-generation bill implements necessary reforms to make certain the Peace Corps has what is required to meet the needs of its Volunteers around the world. From including necessary student loan reforms to affirming a path to federal government employment for Returned Peace Corps Volunteers, this legislation also ensures that the agency better reflects the United States’ rich diversity and talent.” Similar legislation in the House (H.R. 1456) overwhelmingly passed the House Foreign Affairs Committee last September and awaits further action.

At this point, the good news is that both the Senate and House committees with primary jurisdiction over the Peace Corps have given strong, bipartisan support to their versions of the Peace Corps Reauthorization Act. Now, Senate and House leaders will be discussing and strategizing on how to best bring this legislation before their respective chambers for a vote.

Read this press release to learn more about the legislation.

Read the text of the Senate bill here.

Use this link to learn more about the similarities and differences between S. 4466 and H.R. 1456.

We are looking for advocates willing to seek district office meetings with their lawmakers. Contact  advocacy@peacecorpsconnect.org if you can help. And don’t let up.

Ask lawmakers to co-sponsor and pass the Peace Corps Reauthorization Act of 2022.

Write your Senators to co-sponsor the Peace Corps Reauthorization Act

Jonathan Pearson is the director of advocacy for National Peace Corps Association.