Opinion: We are the problem. 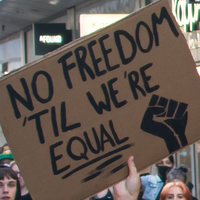 From someone who has worked in international development: We must stand with Black Americans and acknowledge the role racism plays in our institutions — and the work itself.

As the granddaughter of immigrants, I grew up knowing how privileged I was simply by the sheer luck of having been born in the United States. Being multicultural and Latinx, I spent most of my formative years between two worlds, never quite fitting in either, eager to connect more deeply with my Latin American roots.

I went to El Salvador with a nonprofit organization for the first time when I was 16 years old to build schools and water systems. It was life-changing, though not entirely in a way I might have expected. On one hand, I recognized that my presence and very unskilled labor were wholly unneeded. Yet I felt that by bringing money to fulfill locally-expressed needs, managed by local leaders, we were useful; the connections I made with Salvadorans felt genuine, valuable, and educational on both sides.

In college I realized the world was much bigger than Latin America, and I wanted to know all of it. I took Arabic and learned about Islam. I did a fellowship in the Maldives and took courses on Africa and Asia. I studied abroad in Spain. These experiences reaffirmed my commitment to working to alleviate poverty and inequality.

So I joined the Peace Corps — because I wanted to “help people” and “make a difference.” I also wanted to atone for the sins of my country: the U.S. legacy of slavery, colonialism, looting other countries, interfering in their politics, and pillaging their people and resources.

People sometimes asked why I didn’t want to work on solving the problems we have here at home. I thought, well, it’s a big world with a lot of problems that need to be solved. We all have issues we are passionate about — there’s room for each of us to do what calls to us.

At the same time, it’s been clear to me for a long time that racism is alive and well in America. But I thought that the big battles were behind us. That most Americans believed we are all created equal and that all human lives have equal value. That we had largely won the civil rights movement. 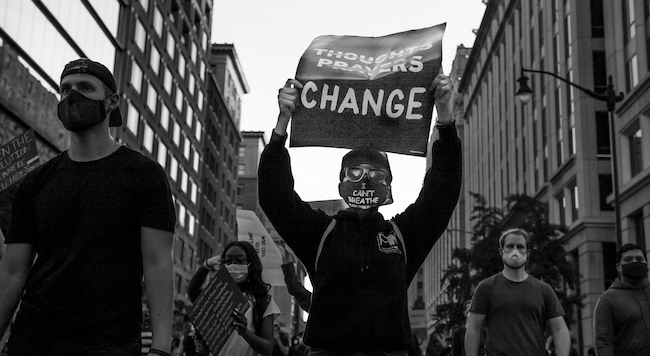 Photo of protests in Washington, D.C., on June 2 by Yash Mori

George Floyd’s murder was the spark that ignited protests across our nation — again. But this is about far more than one murder or the many before it — of Black men, women, and children. These lynchings, police brutality so startlingly displayed, are just the most visible element of structural and systemic racism and oppression that Black Americans have been fighting against and dying from for centuries. Now is the time for all of us — especially those of us engaged in international work — to stand with Black Americans.

The truth is, I no longer work in international development. I saw too many cases of failed foreign aid projects that didn’t treat locals as leaders and partners, took jobs from locals, reduced the accountability of local governments, contributed to a lack of local ownership, and weren’t sustainable. In other words, I saw an imperialistic power dynamic at play. But the problem isn’t just projects or systems. It’s us — the people who do the work.

Racism is deeply embedded in our society. And international development is deeply intertwined with race, socioeconomic, and power dynamics that fuel what has been defined as the white savior industrial complex.

Racism is deeply embedded in our society. And international development is deeply intertwined with race, socioeconomic, and power dynamics that fuel what has been defined as the white savior industrial complex. We need a paradigm shift in international development work. As Aaron Williams, former director of the Peace Corps, said: “U.S. international and foreign affairs organizations should rise to this challenge, and seize this moment to demonstrate leadership in pursuing broad-based policies and programs that will promote diversity and social justice in both their U.S. and overseas offices.”

What I’d like to see change in Peace Corps

When Americans work abroad, we bring our biases with us — as well as our privilege and entitlement. Peace Corps Volunteers are no exception. Volunteers of Color face additional and unique challenges during service — much as they do every day in America. But abroad they are more isolated and have less support than at home.

I run the Instagram account @peopleofpeacecorps, where many returned Volunteers have shared stories of dealing with subtle and blatant racism from fellow Volunteers, Peace Corps staff, and host country nationals: everything from a Volunteer being called the N-word by fellow Volunteers, to staff placing the burden on Volunteers of Color to conduct diversity trainings that their fellow Volunteers complained about.

So it’s understandable that Volunteers felt betrayed by the Peace Corps’ initial statement — it was so vague, we could not even be sure it was about the murder of George Floyd. Returned Volunteers were not quiet in our criticism. Sixteen days later, the Peace Corps issued a new statement in which the agency committed to addressing racial injustice and outlined some steps for putting people and groups in place to examine the issue and educate leadership. That’s a start. But the proof will be in the actions that follow.

As someone who advises purpose-driven organizations on strategic shifts, there are three broad areas I would advise the Peace Corps to focus reform efforts.

If the Peace Corps is serious about reform, we’ll see a roadmap laying out concrete actions and specific goals with measurable results toward progress. For us who are part of the Peace Corps community, if we care about the future of the agency and the ideals that it purports to uphold, we’ll insist on this.

It’s important that National Peace Corps Association is cosponsoring a conversation on racial equity in international service on June 30 and, on July 18, hosting a summit on the future of Peace Corps. Ideas and concrete, specific recommendations will come from these conversations. We’re very aware that with no Volunteers in the field, the future of the Peace Corps is very much in doubt. But with no Volunteers in the field, this is also a unique opportunity to make profound and systemic changes.

Peace Corps is supposed to represent what’s best about America. If we as individuals cannot stand up against systemic racism and oppression at home, we are not qualified to work alongside nonwhite people anywhere in the world. And if we don’t demand that same commitment from Peace Corps, what future will it have?

TASHA PRADOS is the founder of Duraca Strategic, which helps purpose-driven organizations maximize their impact through branding, business, and marketing strategy consulting. She has 10 years of project management and communications experience with the world's leading brands, agencies, and organizations. Prados is also a freelance writer, digital nomad, and returned Peace Corps Volunteer who served in Peru 2011–13, and was featured on the National Peace Corps Association’s inaugural “40 Under 40” list. Keep up with her on Instagram at @t.prad.