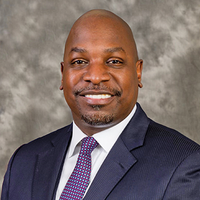 C.D. Glin takes on responsibilities as vice president, global head of philanthropy for the PepsiCo Foundation

C.D. Glin (South Africa 1997–99) took on responsibilities as vice president, global head of philanthropy for the PepsiCo Foundation in May. He oversees daily management of the foundation and focuses work toward a more sustainable food system. Glin had been president and CEO of the U.S. African Development Foundation, an Africa-focused philanthropic organization established by Congress to invest grant capital, build capacity, and scale locally owned, sustainable solutions for underserved and agricultural-dependent populations. He was the first director of Intergovernmental Affairs for the Peace Corps and served as associate director for the Rockefeller Foundation in Kenya. He was also part of the first cohort of Peace Corps Volunteers to serve in South Africa, a major milestone after the end of apartheid.