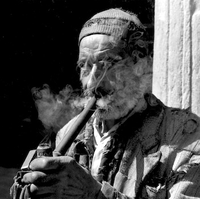 The most recent Peace Corps Writers awards: love in Peru, the world’s biggest owl, a murder trial in Tanzania, and the lifetime contributions of a novelist whose characters meet racism with courage and love

Photo: Persian man smoking. From The Face of Iran Before by photographer Dennis Briskin

BAKED INTO THE MISSION of the whole Peace Corps experience is the work of telling stories: of listening, catching, giving voice and shape and form with a sense of fidelity to people and place, and having an awareness of audience.

The current Writer of the Year Award pays tribute to the lifetime of work by Mildred D. Taylor, who has brought to a close a series for young readers that spanned decades. Read an essay on Taylor by John Coyne here.

Every Hill a Burial Place

In March 1966, outside a small village in Tanzania, Peace Corps Volunteer Peppy Kinsey died when she fell from a rocky hill where she and her husband of 16 months were picnicking. Bill Kinsey, also a Volunteer and schoolteacher, said it was a tragic accident. Tanzanian eyewitnesses reported that the couple had been arguing, then struggling. Bill Kinsey was arrested shortly after by Tanzanian police and charged with murder.

The trial took place in Mwanza, on the shores of Lake Victoria. Tanzania had been independent only five years, its legal system taking shape. The Peace Corps itself was less than five years old. Country director Paul Sack faced hard questions about the organization’s obligations to the deceased Peppy and her family — and to Bill, now on trial. In Washington, new Peace Corps Director Jack Vaughn grappled with those same questions.

Peter Reid, a Peace Corps teacher in Mwanza at the time and later a public interest lawyer in California, documents the events and the actions of a wide array of players, both American and African, through extensive interviews, Peace Corps documents, and detailed notes kept by many key players. 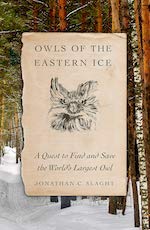 Owls of the Eastern Ice

A Quest to Find and Save the World’s Largest Owl

“I saw my first Blakiston’s fish owl in the Russian province of Primorye, a coastal talon of land hooking south into the belly of Northeast Asia,” Jonathan Slaght writes. “No scientist had seen a Blakiston’s fish owl so far south in a hundred years.” Slaght was serving as a Peace Corps Volunteer in the Russian Far East (1999–2002) when he spotted this enormous, elusive, and panicked bird. His subsequent research and account of tracking these owls shapes an exhilarating exploration.

Accolades for Owls include being named a New York Times Notable Book of 2020 and Best Nature Book of the Year from The Times of London; being longlisted for the National Book Award; winning the PEN/E.O. Wilson Literary Science Writing Award and the Minnesota Book Award for General Nonfiction; and receiving many best book of the year listings.

Read an excerpt from Owls of the Eastern Ice here. 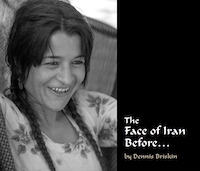 Dennis Briskin made these photographs of people in central Iran while living there during the years 1967–69. He calls it the face of Iran (a diverse, colorful nation) because he used black-and-white film to record the surface of what caught his attention that he thought worth saving. Locations include Arak, Hamadan, Kashan, Esfahan, and Tehran. This book follows and is a companion to the 2019 book, Iran Before…

When he began photographing in Iran, Briskin had six months’ experience with his first 35mm camera and no formal training in photography. He grew up avidly reading the photojournalism magazines Look and Life. See a gallery of Briskin’s photography from The Face of Iran Before… here. 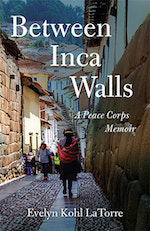 Raised in Montana by devout Catholic parents, in 1964 Evelyn Kohl LaTorre arrived in Abancay, Peru, to begin two years of Peace Corps service. She and her roommate, Marie, worked in a hospital, started 4-H clubs, attended campesino meetings, and taught PE in a school with a dirt floor.

Evelyn also fell in love with Antonio, a local college student, which she confessed to a priest. “Say three Hail Marys and three Our Fathers and go in peace,” he told her. The couple wed in a civil ceremony followed by a religious ceremony with a few of Antonio’s family and friends. They emerged from a 15th-century Spanish chapel and ran laughing down a centuries-old cobblestone street, “between the sturdy granite Inca walls that supported the big stone cathedral and the chapel behind it.” Reviewer Mark D. Walker notes that photos and a map help bring the author’s story to life. 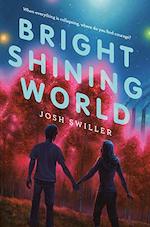 A novel about young people coming of age in a chaotic and disturbing world could hardly be more timely, notes Peter Deekle in his review of this book, citing this passage: “Anyone could feel — how battered people were by the rising apocalyptic tide, how deeply they wanted to just go to sleep and wake up in a better place.” Teen protagonist Wallace Cole is deprived of care and attention from his career-driven father. Jackduke Energy, a dominant regional power-generating enterprise, employs Wallace’s father and provides a context for Wallace and his classmates to take action and confront the circumstances affecting their community.

Author Josh Swiller served as a Volunteer in Zambia 1994–96 and credits being a member of the Deaf community for his resilience. He demonstrates an acute sensitivity to the internal motivations and interpersonal interactions of his characters. 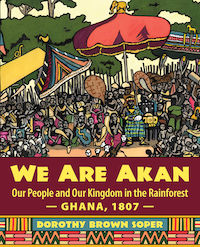 Our People and Our Kingdom in the Rainforest — Ghana, 1807

A work of historical fiction that follows three months in the lives of the boys Kwame, Kwaku, and Baako, ages 11–13, who live in and near the fictional town of Tanoso in the Asante Kingdom. Theirs is a richly illustrated story set in 1807 — when the kingdom faces rebellion and the decline of its role in the Atlantic slave trade. The boys balance the life they know with new possibilities for their future.

As a Volunteer in Ghana 1962–65, Dorothy Soper taught French to Akan students. Returning to the U.S., she earned an M.A. in African history at UCLA and developed units on African culture and history for elementary school classes. James Cloutier served as a Volunteer in Kenya (1962–65), where he created audiovisual materials to train land recipients to become cash crop farmers. Today he is an artist in Oregon; for this project he created two maps and over 90 illustrations of people, daily life, and celebrations. 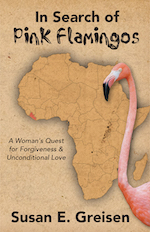 In Search of Pink Flamingos

A Woman’s Quest for Forgiveness and Unconditional Love

At age 19, certified practical nurse Susan Greisen left behind the farmlands of Nebraska for Zorgowee, Liberia, where she served as a Volunteer 1971–73. She introduced prenatal and well-baby clinics and formed a relationship with the head midwife in the area, Bendu. She taught classes for midwives and provided basic supplies. Reviewer Cynthia Mosca lauds the gumption the author displays, while Greisen’s parents offer criticism and a message that boils down to: Follow your passion, but get married and become a farmer’s wife. Instead, Greisen went on to serve as a Volunteer again, in Tonga (1973–74). She did not become a farmer’s wife, either. An interracial romance led Greisen’s parents to disown her.

Golfito is the town in Costa Rica where Jim LaBate served as a Volunteer 1974–75. This novel features a character named Jim, newly arrived to begin Peace Corps service there. Advised to adopt a locally familiar name, he takes the moniker Diego. He meets Lilli, a high school girl who faces a life-changing trauma when she is raped by a U.S. high school student who departs the country the next day. Diego and Christina, a Peace Corps nurse, assist Lilli through the months ahead. The town of Golfito itself — home to the American Fruit Company — is described in vivid detail, notes reviewer Jim Skelton.

In the Coral Reef of the Market

During his third year as a Volunteer in Oman (1975–79), Earl Huband worked in Salalah, the capital of Oman’s southern district. These poems are based on that Peace Corps experience, notes reviewer D.W. Jefferson, who lauds the honesty and grace of the poems in this chapbook.

A Cup of Stars

Since serving as a Volunteer in Burkina Faso (1975–77), Joseph Monninger has written books of fiction and nonfiction, and young adult novels. Now comes a collection of tightly written stories from across the years.

This story appears in the special 2022 Books Edition of WorldView magazine. Read more about these books and others at Peace Corps Worldwide.