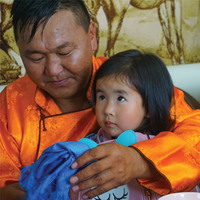 As Volunteers were being evacuated from China, in Mongolia, Lucy Baker and others watched their country go into lockdown. The government declared that February celebrations for Tsagaan Sar, the Lunar New Year, would be suspended. There were no confirmed cases of coronavirus, but the government wasn’t taking chances. And Volunteers were told to “stand fast.”

Baker lived in Bayankhongor, a city of 30,000 in the southwest. She served as a health Volunteer, teaching in a high school and helping colleagues implement a new health curriculum. She led summer health camps and served as a Volunteer “sub-warden” — a leader in times of crisis. She studied biology at Emory University, hoping to better understand how infectious diseases affect our bodies and, as she says, “how the world reacts to them.” Like now. In college, she also went to Botswana to study HIV/AIDS.

She arrived in Mongolia in June 2018 and was closing in on the completion of a normal term of service. She planned to stay on as a volunteer leader for a third year: working with an NGO in the capital, Youth for Health, which provides screening and testing for sexually transmitted diseases, as well as counseling for youth on stigma over same-sex relationships. “Mongolia loves Peace Corps,” she says. “And Peace Corps Volunteers love Mongolia!”

“Then the email: I had about 36 hours to pack up everything and say goodbye.”

Wednesday, February 26, walking home from visiting a friend: “My site mate called me in tears: ‘Lucy, we’re being evacuated.’” Korean Air, which provides the majority of flights out of Mongolia, had ended service. “Then the email: I had about 36 hours to pack up everything and say goodbye.”

Teachers came over at midnight to say farewell. That was hard. Baker told them, “I’ll be coming back, you know.” That was the plan; she and the newest cohort of Volunteers would return. 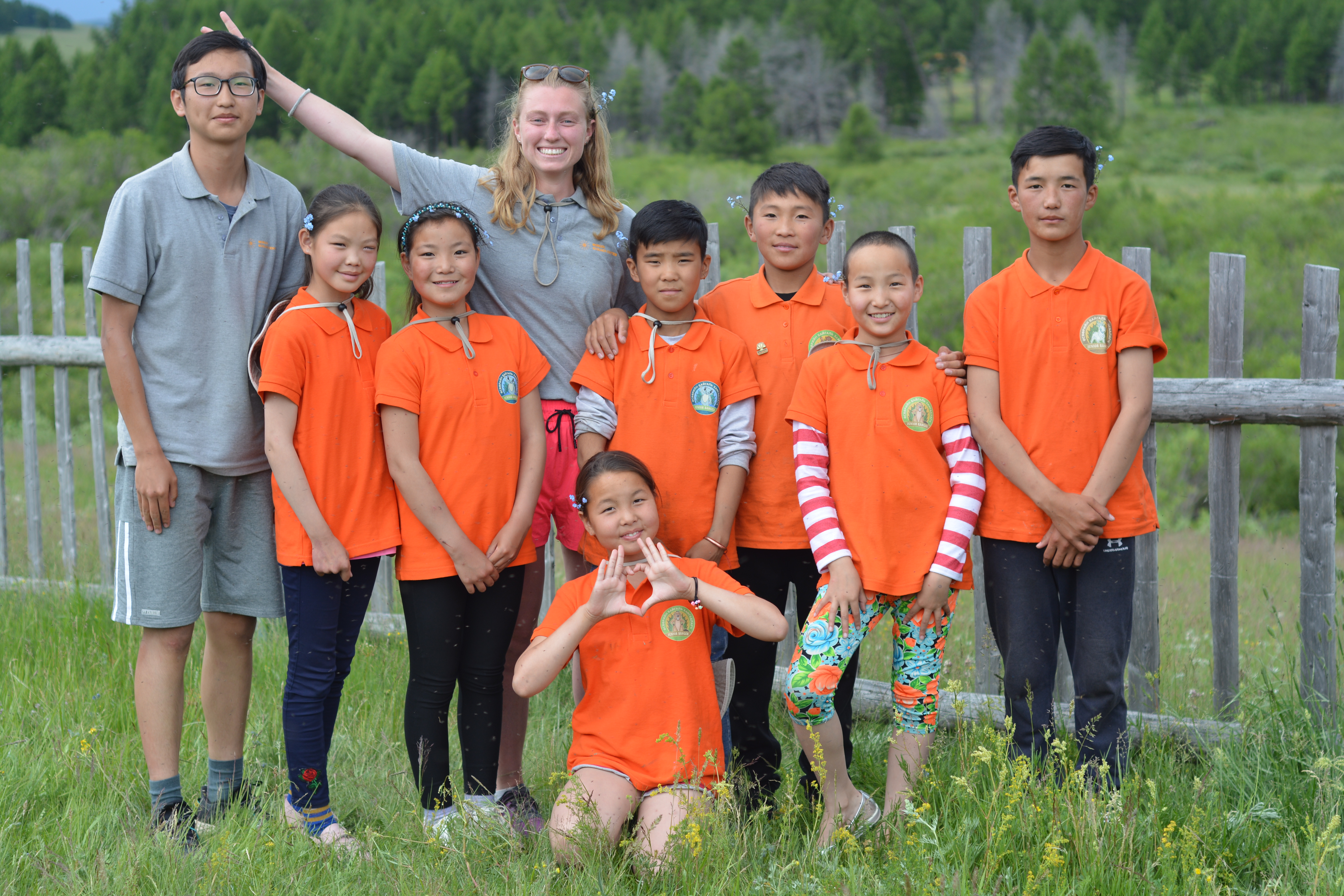 Lucy Baker, center back, was invited to be a counselor for an environmental conservation camp called Junior Rangers. “We taught lessons on climate change, first aid, did science experiments, chaperoned dances, and gave out tissues when crushes didn’t end well,” she writes. “The kids wrote us little notes when camp was over, and I still have them to this day.” Photo courtesy Lucy Baker

Baker came home to family in the Bay Area. That was before the area’s shelter-in-place order. And it was a good ten days before the rest of Peace Corps Volunteers around the world got the news that they would all be leaving. And Volunteers from Mongolia got the word that their service was being closed. —Steven Boyd Saum

I served nine beautiful months in Mongolia, where I contributed to English education and community development. Having entered Peace Corps with a degree in journalism, I love arts and culture. So a couple months into my teaching at the university where I worked, I was both delighted and bewildered when my colleague said one afternoon that we wouldn’t need to plan the next lesson. We always tried to plan. No, she explained, we’d take our first-year students to the province museum.

The next October morning, with the snow falling, my colleague rolled up in her car at the bottom of the hill from where my Soviet-era apartment stands. I felt grateful for the ride. Usually I have to walk into town. 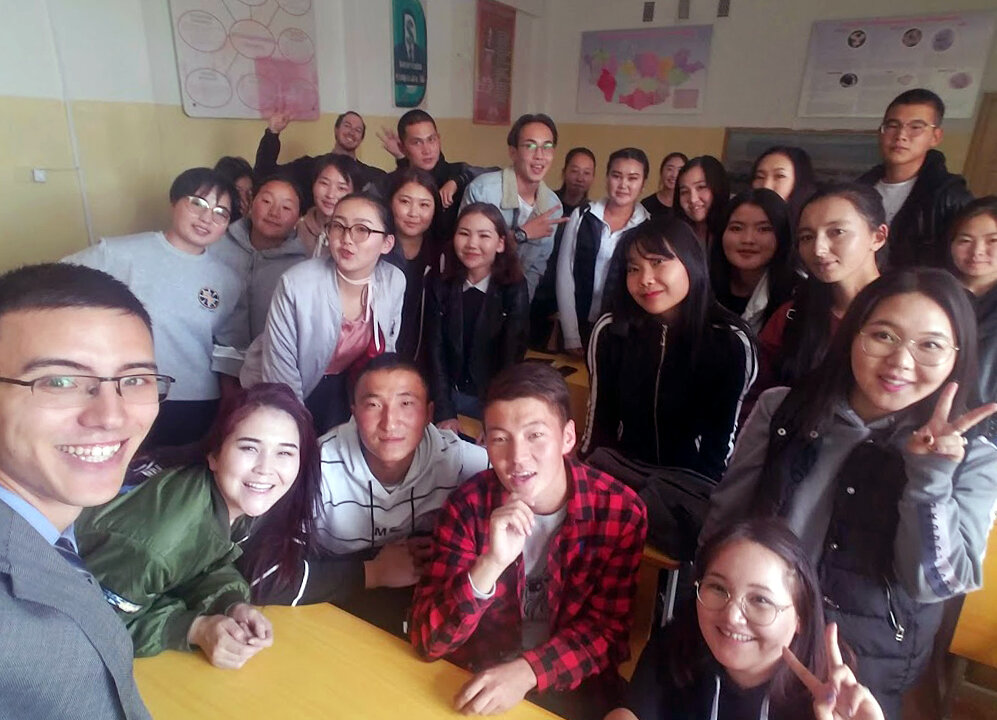 English club meet-up: A big turnout for the first meeting of the school year. Photo by Daniel Lang

Inside the museum I took off my coat but kept on my plaid scarf. (Mongolians love my plaid accessories.) Students looked elated to see me. They’d only known me a month, since Mongolia’s school year began September 1.

We saw paintings from Mongolia’s Soviet-partnered past — and, across the way, various stuffed creatures. My students called me over, speaking Mongolian and broken English, asking for help understanding a sign. I helped a student double-check a phone dictionary to confirm: We indeed stood before a “squirrel.”

In the museum’s later halls, my colleague called me over and spoke cheerfully about ceremonial outfits and the objects Mongolians use at holidays. I’d seen some of these while with my host family during my Peace Corps training summer in the countryside. But I’d never seen anything like what was waiting in the final room: the largest морин хуур (morin huur, or “horse fiddle”) I had ever seen. A giant could have dropped off that marvelous Mongolian, two-stringed instrument — with its trapezoidal body and long, elegant neck. In just a few months I had heard many performances on the normal-sized equivalents. My colleague made sure to get a photo with me with it for Facebook.

I gave them grammar guidance. They gave me a new way of seeing.

The next class I taught with that colleague, we critiqued students’ museum presentations. And while they truly were far from perfect, I loved getting to hear how they described the exhibits. I gave them grammar guidance. They gave me a new way of seeing.

When we were evacuated from Mongolia in February, I left behind students, colleagues, and community members eager to improve their English.

At the university, I taught undergraduates on paths to becoming instructors, businesspeople, and diplomats. Mongolia only began English education in the 1990s, making today’s Mongolians still among their nation’s first English language learners.

At night, fellow Volunteers and I taught English to learners of all ages. I worked with community groups at our city library, young professionals at our local Toastmasters, and doctors and nurses at a hospital. I spent my Saturdays with teachers and children at an orphanage. Sundays, after mountain hikes and Mass, I also taught lessons in Chinese.

Days before I left, I had met with local officials to found a camp to help rural students become mentors. I met new collaborators for furthering language learning for Mongolian youths. At Mongolian Lunar New Year celebrations, I ran into community members who had learned English from Peace Corps Mongolia’s first cohorts, over two decades ago.

The people I worked with — months later, we keep in touch. Back in the States, I helped colleagues secure an acceptance with the first research article from Mongolia in one international peer-reviewed journal. A speaking club I frequented has invited me to video chat with them. A Mongolian youth group has invited me to help them practice English. I’ve gladly taken part.