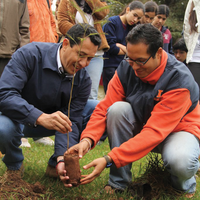 Gay and lesbian RPCVs and staff joined together during Peace Corps’ 30th anniversary celebration in Washington, D.C. in 1991 to advocate for lesbian, gay, bisexual, transgender and queer rights in the Peace Corps community and around the world. What we knew but many others did not realize was that when John F. Kennedy created the Peace Corps in 1961 as a federal agency it explicitly barred people with “homosexual tendencies” from service in a federal agency.

That’s a far stretch from where the agency is now, placing same-sex couples and transgender Volunteers in service in many countries. The change is due to the work of a great many folks. The road from then to now has surely been bumpy and there is more work ahead.

Last year Peace Corps Volunteer and classroom teacher Romany Tin was separated from service in Cambodia after he seroconverted to an HIV-positive diagnosis. When Peace Corps announced that decision, it went viral and garnered attention on BuzzFeed, Them, and Poz. We elevated Tin’s story on our social media and our email listserv. Our lesbian, gay, bisexual, trans and queer community was concerned for obvious reasons. To our members, it was déjà vu because a decade ago we successfully argued that same issue in the case of Jeremiah Johnson and we had won.

People living with HIV can and do serve successfully in Peace Corps. Like all medical considerations, there are many individual and personal circumstances to factor in. In Tin’s case, the agency wasn’t aware of the preceding policy because Peace Corps staff usually serve under a five-year term limitation. Like many long-established RPCV groups ours can and sometimes does help Peace Corps maintain some of its institutional memory, especially when advocating for change at the individual or community level.

We communicated to Peace Corps staff about these earlier Peace Corps policies that could have prevented that decision from being made in the first place. Under similar circumstances, Jeremiah Johnson (Ukraine 07-08) was separated from service in 2008. With support from the American Civil Liberties Union, Peace Corps legal counsel decided to accommodate HIV-positive Volunteers under existing federal law. In the Tin case, Johnson, who later became HIV project director for New York Treatment Action Group, circulated a demand for clarification of the agency’s current policy on HIV-positive Volunteers and their de facto separations. Johnson’s demand ended up on the desk of Peace Corps Director Jody Olsen.

His letter led to a 2018 face-to-face meeting between he and Peace Corps Director Jody Olsen. Four days after the meeting Olsen released a response to Johnson’s letter that, among many things, reported the following: 18 countries are medically cleared to support HIV-positive Volunteers, how selections are made, and how Volunteers can access a pre-exposure prophylaxis to prevent HIV.

Our memberships remains vigilant to ensure that discriminatory practices aren’t influencing decisions on a person’s ability or desire to serve in Peace Corps. We remind all PCVs and applicants that they can report any alleged discrimination to Peace Corps’ Office of Civil Rights and Diversity which investigates complaints regarding staff and Volunteers, trainees and applicants. We have not learned, however, if Romany Tin’s case has been resolved.

Like many other NPCA affiliates, LGBT RPCV has evolved with the times. Our steering committee and members are all over the world and most of our operations are carried on digitally. Depending on what criteria you measure—you can register with NPCA, follow us on Twitter, or join our Facebook group, for example—we have about 500 members. And our reach truly is global. In 2018, our website received over 77,000 views from 83 countries.

We include “RPCV” in our name but we’re equally interested in the PCVs and in recruiting them. I would argue that the crux of our work is about motivating and inspiring the next generation of LGBTQ Volunteers for Peace Corps service and to support those who are in the field. We collect stories from RPCVs and staff about their experiences in various countries. These serve as great references for people considering the realities of joining Peace Corps and the impact and influence their sexual orientation or gender identity might have on that decision.

We collaborate with Peace Corps recruiters to publicize and attend Pride events across the country and we collect safe zone/ally trainings from Volunteers in the field. Over the years, we’ve maintained a good working relationship with Peace Corps staff. Those ties make our advocacy easier and more effective and we have assured them we are listening.

There are still Peace Corps host countries whose governments have laws that discriminate in areas of sexual orientation and/or gender identity. However, Peace Corps’ current application process allows applicants to choose where they want to serve and that has shifted our mentorship and resources to other issues. Applying for a specific country and project gives a prospective Volunteer the ability to investigate their country of service to assure a good fit, which has refined our group’s role in mentoring applicants.

Nine years ago when I was invited to serve in Paraguay as an environmental educator I had only two months to search the internet for everything I could learn about the country. Now there is a global LGBTQ chat group that can lead applicants to several Facebook groups for many of those countries where PCVs serve. Applicants can connect directly with an LGBTQ Volunteer in service and lead to valuable friendships and create a community before getting on the plane.

It Takes More Than Pride

It may be chic to be an ally and hang rainbow flags during the June Pride celebrations, but there are definitely struggles to being an LGBTQ Peace Corps Volunteer. For starters, there are dozens of countries where Volunteers serve that criminalize homosexuality. In others without formal legislation, conservative socio-cultural tradition make our service difficult.

For example, in my case Paraguay had no official laws against homosexuality, but it certainly was not a safe place to be out. No volunteers I knew could be open about their sexual orientation in their community and expect to be able to work. In fact, a handful of Volunteers had to change sites when someone in their communities either discovered or suspected that they were LGBTQ and requested that Peace Corps remove them. For some of the same reasons, there are only a limited number of countries where same-sex couples can be placed. There is no official list but Peace Corps recruitment staff does work with interested couples to identify which countries will meet their skill set and be open to their placement.

We collaborate and advocate with many partners: In addition to the Peace Corps community, we worked with It Gets Better (IGB) on a video titled “Queer and Abroad” where RPCVs shared their stories about life beyond our borders and their LGBTQ identities. IGB’s story-telling mission uplifts, empowers, and connects LGBTQ youth around the world and the videos resonate with the work we do and the change we hope to see.

In the Third Goal spirit, we contributed a story about Ethiopia to Griots Republic Magazine, an urban Black travel brand that is interested in the range of countries and experiences that our site has collected over the years. We have also partnered with AsylumConnect, a nonprofit that hosts the first website and mobile app and features an online, centralized database of service providers for LGBTQ asylum seekers in the United States.

We are always looking for collaborators and conspirators. Primarily we encourage RPCVs to contribute stories to our website, formally join us through the NPCA (it’s free!), and engage with us on our Facebook group and Twitter account. We also encourage our members to make sure their contact information is up-to-date with Peace Corps, specifically their Speakers Match program, where people can identify that they are interested in helping with recruitment activities and speaking about their LGBTQ identity. We have come a long way since our founding 28 years ago and we look forward to seeing where the future takes us.

Manuel Colón served in Areguá, Paraguay as an environmental education teacher from 2010 to 2012 and is national coordinator for the LGBT RPCV Association. He received Peace Corps’ 2014 Franklin H. Williams award for his dedication to the Third Goal.

This story was first published in WorldView magazine's Fall 2019 issue.