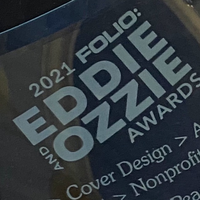 An EDDIE award recognizing a series of stories about Volunteers evacuated from around the world. And a cover asking “What’s the Role of Peace Corps Now?” These awards mark the first time that the magazine published for the Peace Corps community has earned these top honors.

For the first time in its more than three-decade history, WorldView magazine has brought home top honors in the FOLIO Awards honoring magazine editorial and design excellence. Published by National Peace Corps Association, WorldView is a winner of both an EDDIE and OZZIE in the 2021 awards.

WorldView earned EDDIE top honors for a series of articles in the Summer 2020 edition that tell the stories of Peace Corps Volunteers who were evacuated from around the world in 2020. The series captures the Volunteer experiences and the communities in which they were serving, and the unfinished business they left behind. 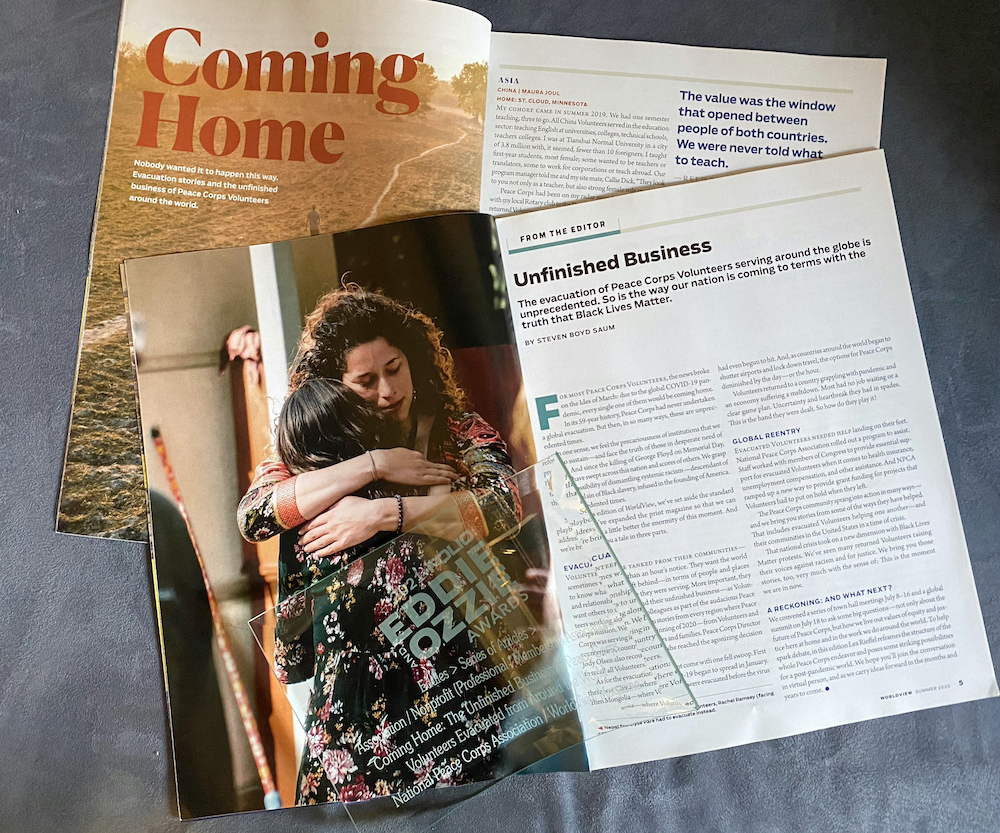 The magazine earned OZZIE top honors for the cover of the Fall 2020 edition, featuring an illustration by award-winning artist David Plunkert. With a dove of peace inside a cage-like COVID-19 molecule, the cover asks: “What’s the role of Peace Corps now?” Plunkert’s work has appeared in the pages and on the covers of The New Yorker, Rolling Stone, Time, and elsewhere. 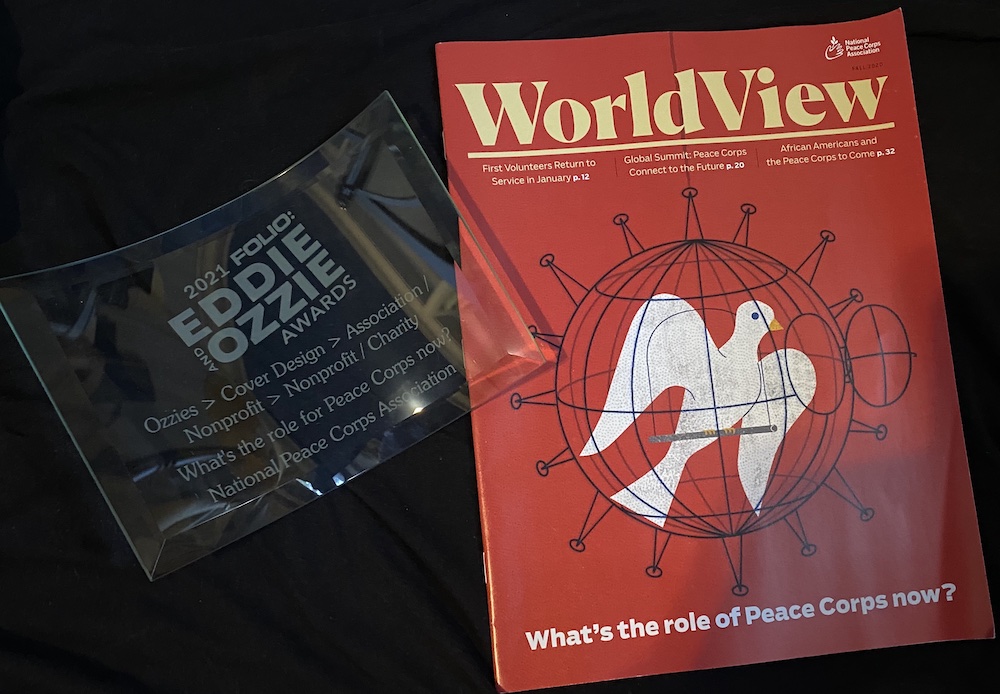 The awards were presented on October 14 at the FOLIO gala in New York City. The EDDIES and OZZIES have been presented for more than a quarter century and draw competition from across the United States and internationally. This year marked the return of an in-person awards ceremony. Other top winners this year include California’s ALTA Journal, Variety, environmental news publication Grist, People, National Geographic Kids, and more.

WorldView is edited by Steven Boyd Saum, and Pamela Fogg serves as art director. The recent digital edition also bears the handiwork of Orrin Luc, who serves as digital content manager. And just joining the editorial team is Tiffany James, who comes on board as associate editor, global stories.

“This is an unprecedented time for the Peace Corps, and it’s heartening to see WorldView recognized for the importance and caliber of the work we’re doing,” says Saum. “There are dozens of people who shared their stories to help readers understand what thousands of communities and Volunteers have gone through — and a small but dedicated team of writers who helped give these stories shape and form. Every one of those Volunteers and writers deserve credit for the editorial award.”

As for the award-winning cover, Saum says, “That asks a question we’re still seeking to answer. And just like when Peace Corps Volunteers first embarked on this mission of building world peace and friendship 60 years ago, in the months to come it will be up to the Volunteers — and all of us in the Peace Corps community — to help define that role in a changed world.”

Read the current edition of WorldView — and those editions that have brought accolades — at worldviewmagazine.org.