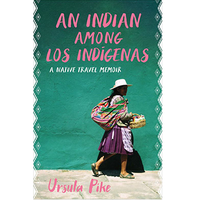 An Indian Among los Indígenas

There are many important aspects to this book. Here are three: Ursula Pike is a fine writer, with an eye for people and places in Bolivia, and an ear for the sounds of languages, buses, and silence; she is deeply reflective about the critical tensions of the cross-cultural experience and the mission to serve; and Pike is Indigenous herself, an enrolled member of the Karuk Tribe of Northern California who grew up an “urban Indian,” largely in Portland, Oregon. This last fact makes her descriptions of cross-cultural experiences and wrestling with Western notions of “development” and the Peace Corps mission compelling.

Beginning in 1994 she served as a Volunteer in Bolivia where, she writes, “the Andes Mountains broke into two separate ranges and continued bumping along South America into Chile and Argentina ... Roads were built around the treeless steep mountains because there was no going over them. In Potosi, the high altitude bone-chilling city whose silver deposits inspired the hot greed of Spaniards.”

Ursula Pike is deeply reflective about the critical tensions of the cross-cultural experience and the mission to serve; and Pike is Indigenous herself, an enrolled member of the Karuk Tribe of Northern California who grew up an “urban Indian,” largely in Portland, Oregon.

How many of us have been struck by the physical beauty and historical clashes that shaped countries we found ourselves in? Have wondered if we were promoting an agenda that benefited our own country more than the people we came to serve? Or worried we were choosing sides in internal disputes over “progress”? Ursula Pike thinks about all of these things, with the added sensibility of someone who grew up with a single Indian mom who had made her own hardscrabble way to education and Forest Service and Bureau of Indian Affairs jobs where white men were in charge. She knows what it is to be brown and poor in America, to silently count color and gender in a new room, as she does on the first day of Peace Corps training. She knows the tiered systems of race, wealth, and education in America. She also realizes that she is Indian but not Bolivian — and rich and privileged by most Bolivian standards, while still poor and a minority in her own country.

This book is brutally honest about sex and alcohol and drugs. Cheap cocaine, male Volunteers’ competition for Bolivian women’s sexual favors, and the difficult gender roles and aspirations of Bolivians become personal for Pike.

There are descriptions of “successful” Volunteers — Daniel, who helps villagers dig wells and build a school with a basketball court. Of her own work, Pike writes primarily about people and relationships. There is always the questioning — about colonialism, development, and charity. She takes notice of and pride in her hosts’ maintaining Quechua and other native languages, and she empathizes with their struggles with tradition and modernity, education and survival.

READ AN EXCERPT from An Indian Among los Indígenas here. This review appears in the special 2022 Books Edition of WorldView magazine.

This review by Rich Wandschneider (Turkey 1965–67) is adapted from a version for Peace Corps Worldwide that won the Marian Haley Beil award for best book review.