A letter to readers from the new editor of WorldView amid unprecedented times.
By Steven Boyd Saum
Read story

Climate Change in the Pacific

Climate change and Pacific nations trying to save themselves.
By Mike Tidwell
Read story

On the Front Lines

Fiji and Beyond: a MacArthur Fellow takes stock of climate change loss and damage — and immediate solutions. By Stacy Jupiter
Read story

Kiribati: Land is tied to identity. But the land is vanishing.
By Michael Roman
Read story

In the wake of a devastating natural disaster, Returned Peace Corps Volunteers mobilized. And the nonprofit Friends of Tonga was formed.
By Michael Hassett
Read story

Earth, Wind, and Firing the Imagination

Peace Corps in the American Conversation

The documentary “A Towering Task” tells a story more urgent than ever — and opens in theaters in May.
By Alana DeJoseph
Read story

The Magazine. Generosity. A New Generation.

A conversation with Kenneth Syring about Peace Corps in Mongolia and work as a crime scene investigator with the San Francisco PD.
Read story

China Farewell and Other Developments In the Peace Corps Community 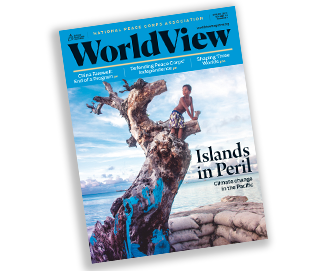 WorldView magazine serves the greater Peace Corps community with news, comment, the arts, politics, and commerce of the cultures of the larger world. Each issue gives voice to Peace Corps Volunteers as they serve, to Returned Peace Corps Volunteers who are still dedicated to global service, and to everyone who wants to make the world a better place.

If you don't receive WorldView, you can subscribe by supporting NPCA at any paid level. Sign up today!

We welcome proposals or completed article submissions that:

• Share recent experiences with human development issues in communities where Peace Corps Volunteers serve
• Highlight how returned Volunteers continue to make a difference in the U.S. and around the world
• Examine aspects of Peace Corps or Peace Corps' social impact

“I have read WorldView for years now and it was FABULOUS to get at post. It’s important to know someone, somewhere out there is doing what you are doing, with a twist, and that’s what keeps volunteers serving and communities asking for more….this publication really does make a difference.”