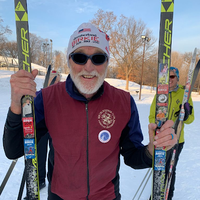 Some Peace Corps Volunteers’ ideas of changing the world end after service, but Minnesotan Paul Thompson left Malaysian Borneo in 1973 with a lifelong mission to save the planet.

In late February, Thompson, 72, will join the Birkebeiner cross-country ski race for the 40th time, in hopes of raising $40,000 to combat climate change and help unify the country. He has already raised $11,000 towards his total goal. The funds will be split between four nonprofit groups: three fighting climate change, and one reducing political polarization.

“Climate change is now beginning to overwhelm the lives of the people most at risk from poverty,” Thompson said. “This is the time for all of us to step up and try to address the challenges we face. We need to work together to solve these problems.”

After joining Peace Corps in 1971 in Malaysian Borneo, Thompson taught biology and health science. When he returned to the United States, he became a licensed teacher, then taught elementary math and reading in Wisconsin and Minnesota. He retired from teaching in 2008. Throughout those years, he has worked to protect the environment, and beat hunger and poverty.

This year’s 55-kilometer Birkebeiner race won’t mark Thompson’s first foray into pairing the effort with fundraising for a cause. On races in previous decades, he has raised thousands of dollars for many nonprofits aiming to combat poverty, hunger, and various refugee crises. The long list includes The Hunger Project, American Refugee Committee, and others.

Thompson is also no stranger to charitable work. In 1981, he worked on youth recreation programs in Somalian refugee camps, then returned to Minnesota and worked for Save the Children on educational outreach and fundraising until 1987. In 1989, he was recognized with the Sargent Shriver Humanitarian Service Award, an annual honor for returned Peace Corps Volunteers with distinguished humanitarian service.

In 1979, Thompson’s first Birkebeiner began as an impromptu adventure on borrowed skis with his brother. The following year, he began asking for pledges to beat hunger. Since then, he has only missed the race in 1990, following the birth of his son. The race was canceled in 2000 and 2017 because of lack of snow.

“My sport is now on life support due to global warming, but even worse, so is the planet.”

“Every skier has seen firsthand the impact of climate change,” Thompson said. “My sport is now on life support due to global warming, but even worse, so is the planet.”

This year, he has a theme of fours in his fundraising efforts. Forty years of Birkebeiner races means $40,000 for four nonprofits. There are also bonuses for select donations with a four amongst the digits. For instance, a $40 contribution wins you the online Green House game. The four non-profits include: