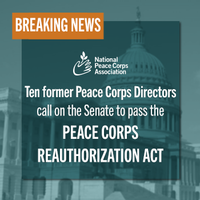 In a bipartisan show of support, ten former Peace Corps Directors who have served under Republican and Democratic administrations alike call on the Senate to pass the Peace Corps Reauthorization Act. The most sweeping Peace Corps legislation in a generation, it would bring important reforms and support for Volunteers as the agency seeks to meet the needs of a changed world.

The legislation has already unanimously passed the Senate Foreign Relations Committee. Its House of Representatives companion legislation (H.R. 1456), authored by Representatives John Garamendi (D-CA) and Garret Graves (R-LA), passed the full House on September 19 with a strong bipartisan vote of 290–115. The Senate legislation currently has 15 co-sponsors, including six Republicans, and if the legislation becomes law, it will be the first full reauthorization of the Peace Corps since 1999.

The former Directors wrote this letter now, as amendments to be considered for the FY23 NDAA are currently being vetted, with floor votes likely to occur after the midterm elections.

This is the time for this critical legislation to become law, so that the Peace Corps can remain a strong force for U.S. global leadership and strengthen connections with the world. The former directors unanimously called on the Senate to meet the moment and pass this legislation during this Congress.

The legislation will provide multiple reforms and improvements to the Peace Corps, including:

View a PDF of the letter here.

We write to you as a bipartisan, unified group of former Peace Corps Directors to express our full support for the swift passage of the Peace Corps Reauthorization Act (S. 4466). We believe that now, with Volunteers returning to the field for the first time in two years, after being withdrawn due to the COVID-19 pandemic, it is essential that the Peace Corps return with a renewed sense of purpose. That is what passage of this legislation will do.

If passed, this would be the first full reauthorization of the agency since 1999. It has been more than two decades since full reauthorization. Multiple reforms included in this bill are long overdue and urgently needed — both to solidify this core instrument of American soft power, and to ensure that the agency has the tools to meet the needs of a changed world.

Fortunately, this Congress is well positioned to pass this legislation and move it to President Biden’s desk for his signature. The companion version in the House, H.R. 1456, passed on September 19 in a strong bipartisan vote under suspension of the Rules. That bill was co-authored by Reps. John Garamendi (D-CA) and Garret Graves (R-LA), with the former being the sole Returned Peace Corps Volunteer currently serving in Congress.

In the Senate, the bill is jointly authored by the leaders of the Senate Foreign Relations Committee, Senators Robert Menendez (D-NJ) and James Risch (R-ID). It has already been unanimously passed out of committee on a voice vote and currently has six Republican and nine Democratic cosponsors. It is a well-crafted bill that reflects strong bipartisan input and ideas.

It is this demonstration of strong bipartisan support that gives us hope that the bill can be passed this Congressional session. Doing so would be a testament to America’s enduring bipartisan commitment to those who serve abroad on behalf of our country. As you both know, the Peace Corps was founded in 1961 with a vision of promoting American values and expertise around the world — and to then bringing back home to our communities deeper global understanding through lessons learned by our Volunteers.

More than 240,000 of our fellow citizens have answered the call to serve as Peace Corps Volunteers, advancing our nation’s security during turbulent times overseas. We therefore ask that you do all that you can to ensure that the Senate version of the Peace Corps Reauthorization Act moves forward, either as part of an existing legislative vehicle, such as the National Defense Authorization Act, or independently. With this act’s passage, we can move one step closer to having the type of Peace Corps that the American people deserve and that will ensure we work together effectively with partner nations around the world.

View a PDF of the the letter from former Peace Corps Directors to Senate Leadership.

Read a summary and analysis of the Senate and House legislation.