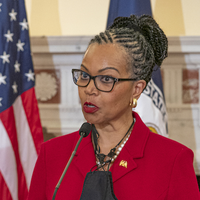 Our public service institutions, whether it’s Peace Corps or the Department of State, must do better. And your work is how we change that.

My story is backed up by the data. These racial disparities are deep and go back decades. The Government Accountability Office released data that in 2002 the number of African American women in the foreign service was a shockingly low 2 percent. Almost 20 years later, that only went up to 3 percent. Our public service institutions, whether it’s Peace Corps or the Department of State, must do better. I am tired of being alone. And your work is how we change that.

The Peace Corps is a critical pipeline to the civil and foreign service. An African American colleague in my office said she had no idea that Peace Corps was for people who looked like her. She assumed it was a leisure activity for people who come from privilege. Another RPCV in my office, also a woman of color, said of the 50 members of her cohort in Jordan, fewer than 10 were people of color; almost all the other people of color left within a year. She and another PCV of color were the only two to stay the full two years. Another colleague who works at the U.S. mission in the United Nations said that her dream was to join the Peace Corps. But because she was in a wheelchair, she was denied entry. When the Peace Corps said no, she took the foreign service exam; she passed with flying colors, both the oral and written exams. Yet once again, she was barred from joining because of worldwide availability.

My road map for building a State Department that looks more like America is grounded in three core values: intentionality, transparency, and accountability. And past practice has shown any organization focused on these three will be able to make systemic change.

The real question we’re grappling with today is how do we both recruit and retain diverse cohorts, as well as make our respective institutions more equitable, inclusive, and accessible? When Secretary Blinken appointed me as chief diversity officer, he made clear that my mandate is to change the part of the State Department’s culture — the norms and behaviors and biases — that stifle diversity, equity, inclusion, and accessibility (DEIA). My road map for building a State Department that looks more like America is grounded in three core values: intentionality, transparency, and accountability. And past practice has shown any organization focused on these three will be able to make systemic change.

First, we need to be intentional. This means changing the culture of the State Department so that every single employee feels invested in advancing the DEIA work. Secretary Blinken has stated many times that an inclusive workforce is not just a “nice to have,” it is a national security imperative. This goes for Peace Corps exactly the same way as it does for the State Department. The United States is the most diverse and powerful nation in the world. Other countries are watching us, and when we fail to live up to our ideals, our adversaries are standing in wait to exploit our shortcomings. That is why it’s critical that we integrate the DEIA work as a lens not only to reform our institutions on the inside, but to guide how we conduct our foreign policy. Our team is also finalizing the department’s five-year diversity and inclusion strategic plan. My office will oversee the implementation of it. We have had countless listening sessions over the last few years; some who have worked on it would say endless listening sessions. But we need concrete action. And we need to accelerate movement on issues that have been ignored for far too long.

Secondly, we need to be transparent. If we are serious about addressing systemic inequities, then we need to be transparent about what we are dismantling. This means collecting disaggregated demographic data on hiring, assignments, promotions, attrition, and other key milestones in one’s professional career. This will help us better understand who is at the table and why we see fewer underrepresented groups rising through the ranks. When we have access to analyze disaggregated diversity data, we are better equipped to make the case for resources and policies we need to make our institutions more equitable, inclusive, and accessible for all.

Lastly — and perhaps most importantly, from my view — we need to be accountable. While the State Department and many institutions have excellent accountability policies on paper, there is sometimes an informal culture that hardwires many of us — including from underrepresented groups — to keep our heads down, to not rock the boat. I’m intent on changing this dynamic by strengthening accountability mechanisms that we have in place and activating the courage that is inside of all of us. We all need to do our part. Speak up, even when it’s uncomfortable. This is how we will retain and increase the presence and promotion of underrepresented groups.

To address the challenges of the 21st century, we need a Peace Corps and a diplomatic corps that truly represents all of America.

The fact that we’re talking about diversity isn’t new. There have been, for many decades, many efforts to diversify the Department of State. What is new is that we are now taking action, speaking forthrightly and honestly about where we have failed and where we need to go. We are in a moment of historic alignment. It’s not just the State Department or Peace Corps that is committed to advancing diversity, equity, inclusion, and accessibility. It is at all levels of government, including the White House and our partners on Capitol Hill. We are living in extraordinarily complex times: a once-in-a-generation pandemic to a reckoning on race and daily threats to democracy at home and abroad. To address the challenges of the 21st century, we need a Peace Corps and a diplomatic corps that truly represents all of America. And if we’re going to succeed in doing this, it is going to take all of us. And we can do this. We can get it done.

These remarks were delivered on September 14, 2021, as part of “Strategies for Increasing African American Inclusion in the Peace Corps and International Careers,” a series of conversations hosted by the Constituency for Africa and sponsored by National Peace Corps Association. They appear in the 2021 Anniversary Edition of WorldView magazine.

Gina Abercrombie-Winstanley is the first person to serve as chief diversity and inclusion officer in the history of the U.S. State Department. She was the first woman to lead a diplomatic mission in Saudi Arabia, advised U.S. Cyber Forces on diplomatic priorities, and served as U.S. ambassador to Malta.