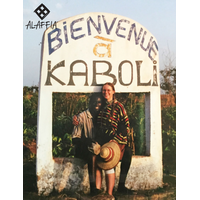 Olowo-n’djo Tchala and Prairie Rose Hyde first met and fell in love in 1996 while Hyde was working as a sustainable agriculture volunteer in the Peace Corps in Togo. After her service, Olowo-n’djo and Rose returned to the United States, pursued further education, and chose handcrafted shea butter as the vehicle to empower the people of West Africa. The two would go on to create Alaffia, a successful business that employs over 700 women through cooperatives in Togo to manufacture holistic, fair trade, natural ingredient hair, face, and body care products using indigenous resources from West Africa such as shea butter, coconut oil, and black soap.

First started in 2003, Alaffia has now opened 7 different locations, all focusing on traditional methods to produce natural, non-chemically infused shea butter; as Olowo-n’djo says, “anybody can make a machine, but not everybody in the world can make shea nuts into shea butter without using chemicals.” Recognized as a certified Fair for Life: Social and Fair Trade organization by the Institute of Marketecology, Alaffia has been able to participate in the global economy based solely on techniques that have been learned for thousands of years.

Olowo-n’djo believes that what sets Alaffia apart from other companies is its focus on indigenous traditions in the creation of its products, saying “To me, understanding the values of the tradition settings that we have here in Togo, it was very clear to me that there is only one way that Togo, or the continent of Africa, can get out of poverty”: utilizing Africa’s own resources to create competitive products with “traditional knowledge.” He further explains that “Alaffia’s work is both tangible and intangible”: the tangible aspect is the use of traditional methods to process shea nuts to create shea butter for American markets, and the intangible is the sense of empowerment and community that the company’s work provides for Togolese citizens through education and care programs.

Alaffia’s success is not just shared by Olowo-n’djo and Prairie Rose—their programs fund long term community empowerment project that impact over 10,000 Togolese people annually through Alaffia’s Social Enterprise Model. This business model promotes community empowerment “to create economic opportunities based on readily available local resources while also highlighting the importance of inclusiveness through women’s cooperatives that rely on traditional knowledge and naturally-made products.” Addressing vital areas for the self-empowerment of the people of West Africa, Alaffia focuses on a series of projects such as maternal care, education, reforestation, and eyeglasses, all designed to encourage economic success and community well-being in Togo. 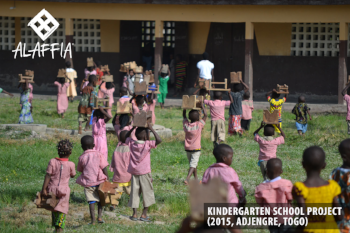 Prairie Rose Hyde was recognized at the 2016 YWCA Women and Businesses of Achievement Celebration for Alaffia’s success, both for her personal entrepreneurship as well as the company’s role in community empowerment projects. She remembers her experience with Togolese communities, particularly young women who had received no education and had grown up destined to be farm workers:

“As a PCV in Togo, I was supposed to teach farmers how to get higher yields with improved techniques and soil fertility. However, I quickly realized that the women farmers I was working with knew far more than I could ever learn about getting things to grow in the soils they had to work with. What outside knowledge I could use to help these women was how to improve their access to markets and fair prices. It was this realization that led to my decision to attend graduate school and, ultimately, to start Alaffia.”

Likewise, Olowo-n’djo recalls the values he was taught in his upbringing that led him and his wife to create Alaffia.  “Since childhood, my mother instilled in me a responsibility to use my opportunities for the benefit of the less fortunate. I saw the potential value of handcrafted shea butter in Western markets, and it was my moral obligation to use the fair trade of this indigenous resource and cultural knowledge for the economic empowerment of my West African communities.” 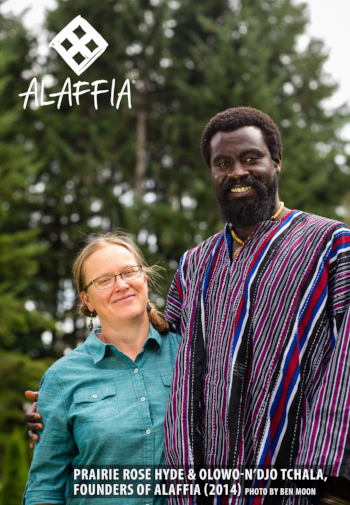 Ultimately, what makes Alaffia so successful is the emphasis it places on encouraging local communities to embrace traditional methods of production. “We have something to offer the world,” says Olowo-n’djo. “It isn’t about always what can the West do for us, it is what can we do for the West.”  Olowo-n’djo wishes to bridge the gap between these two worlds, fostering cultural diversity and interconnectedness for his children as well as future generations.

Braeden Waddell is a Journalism major entering his second year at American University.  Although not a RPCV (yet), he participated in a year-long service experience in Argentina after leaving high school. He currently works as a Communications Intern at NPCA.