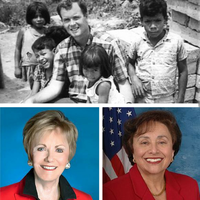 The award—formerly the Congressional Leadership Award—given annually to bipartisan members of Congress who demonstrate leadership to champion the Peace Corps and its ideals on Capitol Hill, has been renamed in honor of Congressman Sam Farr (D-CA). Congressman Farr, winner of the award in 2011 and Returned Peace Corps Volunteer Colombia (1964-1966), is retiring from Congress in January at the end of his term.

Selected by NPCA’s Board of Directors, Congresswoman Granger and Congresswoman Lowey are receiving the award for their outstanding efforts to provide the Peace Corps with the necessary funds it needs to provide more Americans and host country communities with the opportunity to partner in development, service and peace. Congresswoman Granger and Congresswoman Lowey, Chairwoman and Ranking Member, respectively, of the State, Foreign Operations and Related Programs Appropriations Subcommittee, fought hard to secure a record $410 million budget for the agency for this fiscal year.

Recognized numerous times for their work on behalf of vulnerable populations at home and abroad, Congresswoman Granger—serving the greater Fort Worth area as Texas’ 12th District representative since 1997—and Congresswoman Lowey—serving New Yorkers in the 20th, 18th and 17th Districts since 1989—both gave thanks to Congressman Farr upon receiving news of the announcement.

“From the time I first came onto the State and Foreign Operations Appropriations Subcommittee, Congressman Sam Farr and his compelling personal experience convinced me that the Peace Corps is a priority,” Congresswoman Granger said. “As Chairwoman of the Subcommittee, I strove to provide the resources needed to this important program. Congressman Farr has always been a tireless advocate for the Peace Corps, and I am honored to be selected as a co-recipient for the National Peace Corps Association’s 2016 Sam Farr Congressional Leadership Award.”

“It’s an honor to receive this year’s leadership award alongside my good friends and colleagues, Congresswoman Kay Granger and Congressman Sam Farr," Congresswoman Lowey said. "As the Chair and Ranking Member of the State and Foreign Operations Appropriations Subcommittee, Kay and I have heeded Sam’s wise counsel for years and made Peace Corps funding a priority in our annual appropriations bill.  Sam’s tireless energy and commitment to the Agency has helped thousands of young Americans volunteer as ambassadors across the world and represent the best our country has to offer.  This year, on the Peace Corps’ 55th anniversary, we celebrate the service and sacrifice of over 220,000 volunteers.”

NPCA’s Board of Directors is pleased to announce the creation of an Advocate of the Year Award, to be given to up to two individuals or NPCA affiliate groups for outstanding service to advocate for the Peace Corps and its ideals. The official presentation of the award will be given on September 22nd at the Peace Corps Connect Conference.

Nominations for the inaugural award will be accepted through August 31st. Click here to submit your online nomination.

Please join us in congratulating the 2016 Advocate of the Year Award recipient(s) on September 22nd at Peace Corps Connect.