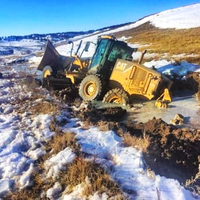 The Associated Press reported on March 25 that two weeks of Midwestern floods have nearly paralyzed residents of remote Sioux Nations reservations in southern South Dakota, swamping roads, trapping people in homes and cutting off water supplies to thousands. The tribe estimates that as many as 8,000 people have had their water supply disrupted and another 2,000 have been hampered or trapped by floodwaters.

Water Charity has joined forces with the E.Y.E.S. Foundation to provide immediate relief in the form of high-quality, rugged water filtration units that will be deployed to the most remote and hard-hit households on the two reservations, offering immediate relief that can also serve future needs.

Water Charity’s chief operating officer, Averill Strasser, says the project is starting by providing residents with 310 portable water filtration units – Sawyer filters, buckets, and instructing on the construction and use of simple water filter setups. The units ensure that these remote dwellings are able to provide water for themselves in the future, should they ever find themselves cut off from help again.

The filtration kits target remote communities on the Pine Ridge Indian Reservation (Oglala Lakota Nation, "Scatter Their Own" Lakota Nation), and the Rosebud Sioux Reservation (Sicangu Oyate, "Burnt-thigh Nation"). The prairie reservation is roughly the size of Delaware and Rhode Island combined and is home to nearly 20,000 people. Many live in deteriorating houses or cramped mobile homes. About half live in poverty, and the unemployment rate hovers around 75 percent.

The Sioux Reservations were hit with a series of "bomb cyclones" which caused and exacerbated severe flooding that has cut off a large number of residences to the normal tribal aid system. Many of the flood victims are elders or younger adults who don’t have the resources to reach the aid provided to them.

“We are aiming to relieve this burden from the administrators and provide a solution to families,” says Strasser. Current water aid has largely depended on truck delivery of water in plastic bottles, which is an unsustainable solution. Hygiene products, dry goods, and water have been provided, but the water is donated or paid for through a Wal-Mart or a Sam’s Club, which are about a two-hours drive from the reservation. Distribution centers are unable to deliver heavy bags of bottled water – even on horseback – due to the flooding, and the plastic bottles will only increase trash in the communities.

"Pine Ridge is like a desert when it comes to resources," said Peri Pourier, a member of the tribe and of the State House of Representatives. "We're using horses to get out to communities that are away from the main roads. We have elders out there that are just isolated."

This disaster relief effort is just a part of a larger initiative that Water Charity is doing to help Native American communities across the country. There is an effort already underway to help Northern California’s Yurok tribe with their water situation. Many Indian Reservations are on “Boil Water Notices” for at least some of the year, and there are a large number of households that have to boil their water year round. Typically, this is because their water supply becomes contaminated with E Coli bacteria, and it is made worse in the drier seasons when the water flow is insufficient to keep the microbe levels from becoming elevated.

To contribute to this effort, go to the webpage for the Sioux Nations Disaster Relief Project – South Dakota.