A Tenth Anniversary Edition of Voices from the Peace Corps: Fifty Years of Kentucky Volunteers 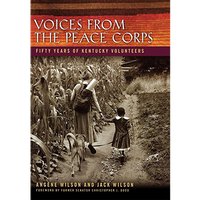 Voices from the Peace Corps

By Angene Wilson and Jack Wilson

A decade ago, Angene and Jack Wilson published Voices from the Peace Corps. Now comes a tenth anniversary edition with a foreword by National Peace Corps Association President and CEO Glenn Blumhorst. This is a very different time. As the new edition was released in 2021, there were no Volunteers in service overseas. Some were serving across the U.S. in partnership with FEMA on community vaccination efforts; others were taking part in virtual volunteering with partners around the world. One ongoing effort that did not stop, as Blumhorst writes, is the work of returned Volunteers to bring a deeper knowledge and understanding of the world to people across the U.S. “That is the long-term domestic dividend of a truly life-transforming experience.”

Bringing a deeper knowledge and understanding of the world to people across the U.S. “is the long-term domestic dividend of a truly life-transforming experience.”

In his original review of Voices from the Peace Corps, David Searles lauded the book for telling stories “using the voices of Volunteers who have served in many countries at different times to collectively present a picture of the Peace Corps experience that has the ring of truth to it.” Searles served as country director for Peace Corps in the Philippines (1971–74) and Peace Corps regional director for the Near East, Asia, and the Pacific (1974–76).

Authors Angene and Jack Wilson were both Volunteers in Liberia 1962–64. Jack worked with the agency in Sierra Leone (1966–68), as a Peace Corps desk officer in Washington, and as country director in Fiji (1970–72). The book began life as an oral history project at the University of Kentucky’s Louie B. Nunn Center for Oral History. Angene Wilson taught at the university for three decades and is professor emeritus of education there. She and Jack have also been effective advocates and ambassadors for the Peace Corps in their home state, repeatedly earning praise in that regard from GOP Congressman Andy Barr.

Among 100 interviews spanning five decades: a physics teacher who served in Nigeria in 1961; a smallpox vaccinator who arrived in Afghanistan in 1969; a 19-year-old Mexican American who worked in an agricultural program in Guatemala in the 1970s; a builder of schools and relationships who served in Gabon 1989–92; and a retired office administrator who taught business in Ukraine 2000–02.

The last couple of years have seen the Nunn Center collaboration take on a new dimension: In 2020, the center began partnering with the Returned Peace Corps Volunteer Oral History Archives Project on in-depth interviews. They completed some 200 interviews in the first nine months alone. Set these alongside stories from communities where Volunteers have served, and an even larger view of the world starts to take shape.