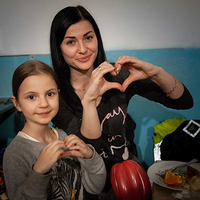 A platform for citizen journalists, volunteers, and those working to deepen understanding of the war and efforts to help refugees.

The Ukraine Stories newsletter started modestly. In the wake of the Russian invasion of Ukraine, so many Returned Peace Corps Volunteers who had served throughout Central and Eastern Europe asked the same question: “What can I do?” For the Ukraine Stories crew, the answer was simple: Tell true stories. Yet this simple answer opened up a complex world of reporting, testimonials, and on the ground volunteering. Since the project’s inception, Ukraine Stories has sought to explain the conflict on a deeper level for those who might not have a background in Eastern Europe policy, history, or current events. We are doing this through deep dives on the region’s history and key figures. We are telling the stories of volunteers who have been working to assist with the refugee crisis. We have given a platform for citizen journalists inside Ukraine to tell their stories. And we have worked on the ground ourselves to help with refugee crisis.

The Ukraine Stories platform also works to realize the Peace Corps’ mission: to promote peace and international solidarity, and pursue solutions to what is one of the world’s most overwhelming problems. We have teamed up with a number of other international partners and RPCV groups to tell stories and show the world what solutions are available in the face of war. Our partnership with the RPCV Alliance for Ukraine and the Friends of Moldova, among others, has been paramount and will continue to be the main focus of our storytelling and reporting. 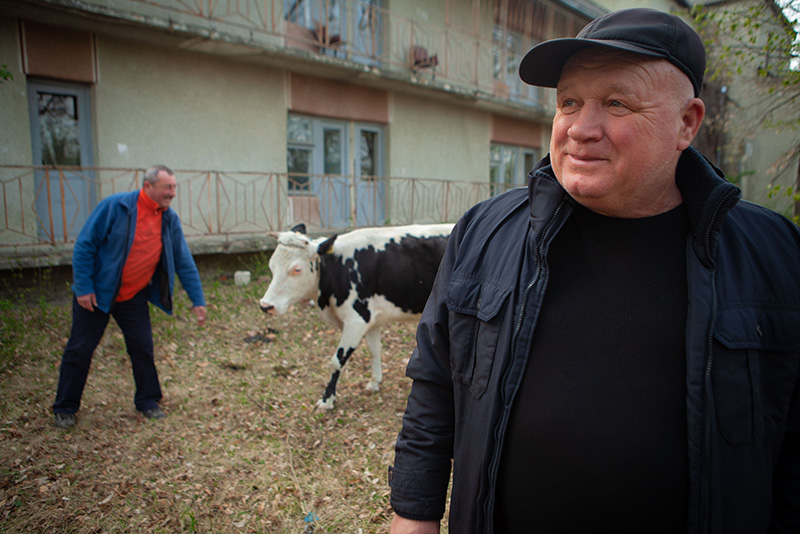 Food and shelter: Vitalie, right, opened the summer camp he owns in northern Moldova to refugees from Ukraine. Then he slaughtered his one dairy cow to feed them.
Photo by Clary Estes

When the Friends of Moldova told us the story of the man who killed his dairy cow to feed scores of refugees in his care, we couldn’t believe it. So we went to meet him ourselves and learn exactly what had happened.

Vitalie bought the summer camp on a hill above the northern city of Bălți in 2019. Dumbrava Albă, as the camp was called, opened at a tough time. Not a year into its operation it had to close due to the COVID-19 pandemic. As the worst of the pandemic seemed behind us in early 2022, Russia invaded Ukraine. Yet Vitalie found solutions amid hardship; he saw an opportunity to do some good in the face of war. He took in about 100 Ukrainian refugees.

“The first days were tough,” Vitalie says. “There had been no water connection or heating for two years because I had it shut down due to the pandemic. It took me two to three days to get everything turned on.” He also had nothing to feed the refugees. “So I killed my dairy cow, just to make sure everyone was taken care of,” he says. “In normal times, I have enough to feed myself: chickens, milk from the cow, things like that. But we had about 100 people here in the first days and I needed to take care of them.”

For many Moldovan families, cows are not only a source of dairy products for day-to-day consumption, but they can also be a source of income. Families sell milk, cheese, and butter at the local piaţă, or open-air markets. For these families, a cow is worth far more alive than dead.

It wasn’t long before the Friends of Moldova, who were also working in Bălți to set up a distribution center, heard Vitalie’s story. They were able to secure funds to buy a new cow. Within 48 hours, they delivered it to Dumbrava Albă. Vitalie was surprised and deeply grateful. 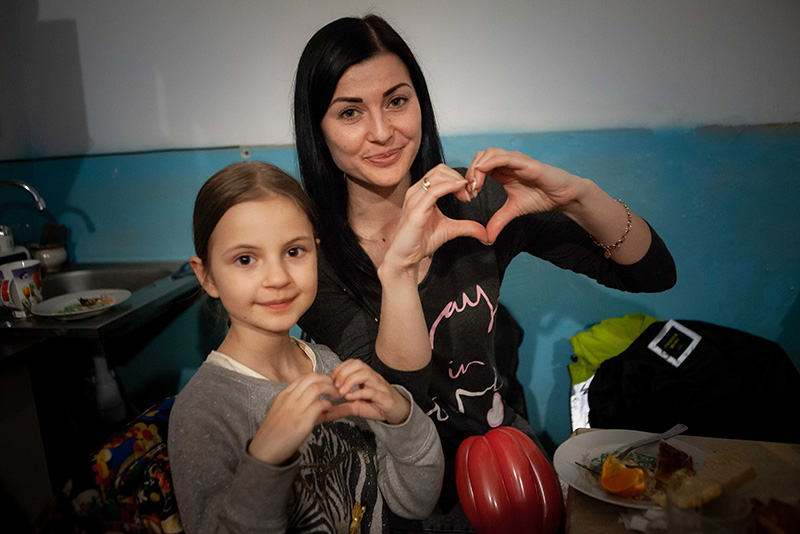 Sertse in Ukrainian, heart in English. Anya and her daughter fled Mariupol. Seen here: an Easter celebration at the Balti Distribution Center in Moldova, where Anya volunteers.
Photo by Clary Estes

Citizen Journalism: One of Thousands

As a cornerstone of the project, Ukraine Stories is providing Ukrainians who are experiencing the war a platform to tell their stories in their own words. One story, from the southeastern corner of Ukraine, was told by Anya, a mother of two daughters: of their harrowing escape from the besieged city of Mariupol.

War ... We used to hear about war on the news. It was something that happened far away in some foreign country. It was something we were sorry to hear about, but it only seemed like a sad movie. I now understand all of that pain that used to be so far away. War is not just terrible photos of destroyed houses. It’s a profound loss of human life.

On the morning of February 24th, we heard explosions. Our city has been under attack since 2014, but on the morning of the 24th, I decided not to risk the life of my children and leave. I thought then that it would only be for a couple of weeks, but as it has turned out, we are leaving forever.

Before they fled Mariupol, besieged by Russian forces, Anya recounted how she tried to bring some semblance of joy to her children on a special day.

It was my eldest daughter’s ninth birthday, so I ran to the store for sour cream to make a cake. I heard machine-gun fire on my neighbors’ street and more powerful explosions somewhere in the distance. I don’t know why it didn’t scare me at that moment. I was somehow more worried about making a cake for my daughter. I’m a mother, after all.

At five in the morning on her birthday, my children woke up to an explosion nearby. All the glass in the house shattered. A piece of plaster from the ceiling fell right onto the bed where my children were sleeping. They were frightened to tears, but miraculously unharmed. We went down to the basement. I even managed to take some of the cake with me. So we celebrated my eldest daughter’s birthday there.

A few days later it became too unbearable to remain. The explosions were constant. My children learned to distinguish what was an explosion and what wasn’t by the vibration of the earth.

A few days later it became too unbearable to remain. The explosions were constant. My children learned to distinguish what was an explosion and what wasn’t by the vibration of the earth.

Anya and her daughters spent weeks making their way to Moldova — dodging air raids, tanks, and gunfire. But reaching Moldova did not bring an end to her worries.

All day, every day, I was on my phone looking for my mother, my grandmother, my friends, my godparents, acquaintances, like a robot ...

Over time, I found news on the internet about who was alive and who was not. It was on a group chat that I found a photo of an old woman whose eyes I recognized. It was my mother!!! Aged and exhausted, but alive!!!

Anya is now volunteering at the Bălți Distribution Center and, like so many others, rebuilding the life she lost in the wake of the invasion.

Ukraine Stories would not be possible without Val Stutz, who served as a Volunteer in Moldova 2015–17 and is a 2022–23 Fulbright Fellow in Moldova. He has also worked extensively throughout Ukraine. His “Deep Dive” series has helped readers understand the conflict in Ukraine on a geopolitical and historical level. He has discussed the significance of the southeastern region of Ukraine and Putin’s aspirations to recreate the imperial Novorossiya of Catherine the Great, with territory stretching across Ukraine. He has given background on people like Russian general Aleksandr Dvornikov — who became known as “the Butcher of Syria” — and Dzhokhar Musayevich Dudayev — a key figure in Chechnya’s independence movement — and he has traced how their military and political careers are connected to the current brutal invasion. He has also sought to explain the challenges that refugee students in Moldova face as they navigate another year of online learning or adapt to the educational norms of another country.

More Work to Do

The Ukraine Stories team includes contributors from around the globe: people from Asia, the Americas, and across Europe. Some have served in the Peace Corps, some have not. And our team has continued to expand. While the Russian war against Ukraine shows no sign of ending soon, we are committed to working in whatever ways we can help those in harm’s way — and continue getting stories out of Ukraine and the surrounding region. Whether it is a deep dive or a profile of a person that helps readers understand this horror on a fundamentally human level — or it is shining a spotlight on an organization helping solve the conflict, or a testimonial from someone living through the conflict, we at Ukraine Stories will keep writing, building connections, and seeking to sustain the Peace Corps ideal of international peace.

This story appears in the Spring-Summer 2022 edition of WorldView magazine.

Clary Estes is a writer, editor, and photographer. She served as a Volunteer in Moldova 2015–17 and as a Response Volunteer in Georgia in 2019.