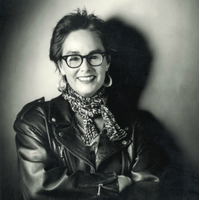 A portrait of Judy Irola

“You can be creative, and you can be managerial and spirited,” Judy Irola said of her work as a cinematographer. Photo by Douglas Kirkland

Judy Irola made history as a producer, director, cinematographer, and educator—and only the third female member of the American Society of Cinematographers. Her first feature, “Northern Lights,” won the Camera d’Or prize at Cannes in 1979. At Sundance her film “An Ambush of Ghosts” won the Cinematography Award, Dramatic Competition. The Peace Corps took her to Niger in 1966. “We came home to a different world in 1968,” Irola recalled. “There were anti-Vietnam War demonstrations, Gloria Steinem had launched the Women’s Liberation Movement, and the Black Panthers were actively engaged in civil rights issues.”

She was tenacious. Her career began in the San Francisco Bay Area with KQED-TV’s documentary film unit. She shot more than 50 features and documentaries. She later earned an endowed chair, teaching at the University of Southern California School of Cinematic Arts. She returned to Niger in 2008 to make the documentary “Niger 66: A Peace Corps Diary,” to introduce audiences to the 65 Volunteers who had served with her and the communities where they worked.

From the tribute in Ms. magazine: “Some directors see cinematography as a technical rather than as an artistic job,” she said. “It’s an artistic job—any director of photography will tell you that. What’s important is my vision—how I look at the image. It’s an artistic rendering. Women can do it just as well [as men] or better.”

Judith Carol Irola was born in 1943. She died in February at age 77 of complications from COVID-19. We mourn her passing and cherish the ways she illuminated the world.