As a Child, She Fled Nazi Germany with Her Family. Two Decades After the War, She Was a Chemist Teaching at a University in Lagos with the Peace Corps. 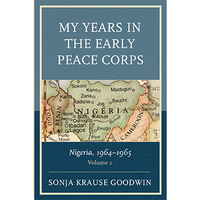 My Years in the Early Peace Corps

Sonja Krause Goodwin had already traveled far from home, earned a doctorate in chemistry, and worked for six years as a physical chemist when she joined the Peace Corps. Born in St. Gall, Switzerland, in August 1933, she had fled Nazi Germany with her family and resettled in Manhattan, where her parents opened a German bookstore. Sonja entered elementary school without speaking a word of English.

Science is where she found her calling. She earned her bachelor’s in chemistry at Rensselaer Polytechnic Institute and her Ph.D. at the University of California, Berkeley, in 1957. After working six years in industry, she joined the Peace Corps and headed for Nigeria. She led the physics department at the University of Lagos until she and the other Volunteers had to leave the country in 1965 due to a politically motivated “university crisis.”

She was reassigned to teach chemistry at the Gondar Health College in Ethiopia 1965–66, a college that also served as the local hospital. On her return to the U.S., she accepted a position at RPI and taught there for 37 years, advancing through the positions of associate professor and professor, and retiring in 2004. These memoirs were published in fall 2021, shortly before Goodwin’s death on December 1, 2021.