She Helped South Korea in Its Time of Need. In the Pandemic, It Repaid Her. 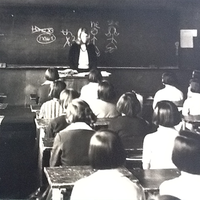 Decades ago, a young American woman served an impoverished South Korea as a Peace Corps Volunteer. Now the country is an economic powerhouse, and it decided to send her a token of its gratitude.

Sandra Nathan spent 1966 to 1968 in a South Korean town as a young Peace Corps Volunteer, teaching English to high school girls. Fifty-two years later, Nathan, now back in the United States, received a care package from South Korea that nearly brought her to tears.

Nathan, 75, had been feeling increasingly isolated at home in Stephentown, New York. Reports about the exploding number of COVID-19 cases in the United States had made her anxious about going outside, where experts warned of second and third waves of infection. Then, early in November 2020, she received a package labeled “COVID-19 Survival Box.” It was a gift from the South Korean government that contained ​100 ​masks and other items “as a token of our gratitude for your dedication to Korea.”

“It was as if this box had been traveling to me since 1968,” s​aid Nathan, a retired civil rights and labor lawyer. “​There was something magical about the box. Some people, Korean people, very far away wanted to make sure that I was OK; that I had what I needed to fight a bad disease. They behaved as though they cared and were responsible for me.”​ 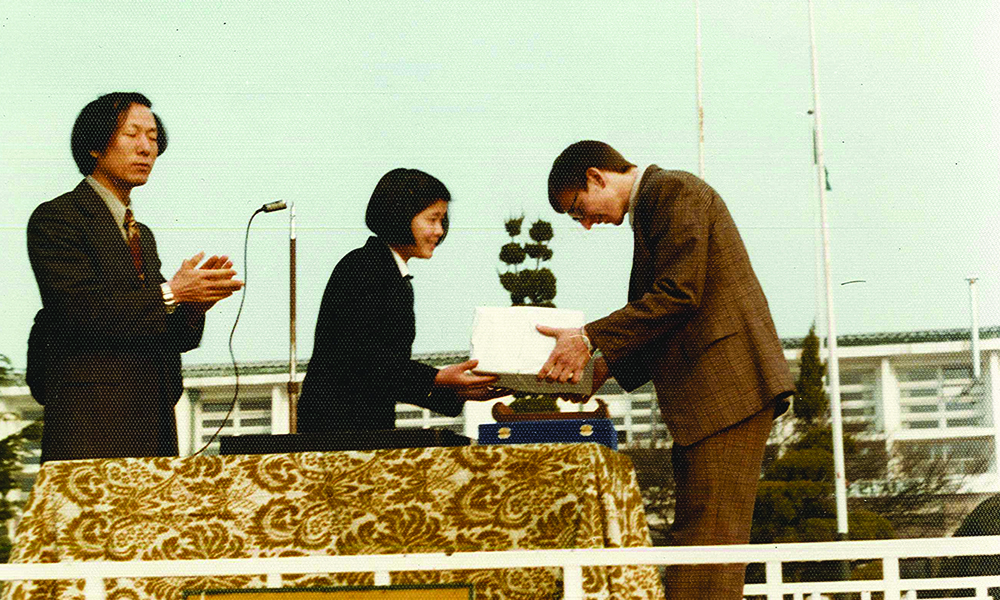 Decades ago, ​South Koreans felt similarly toward Nathan and 2,000 other Peace Corps Volunteers. When the young Americans served as teachers and health care workers between 1966 and 1981, ​South Korea was a third-world country stricken by disease​​​, a dictatorship, poverty, and destruction left by the Korean War.

South Korea is now one of the richest countries in the world, and its response to the coronavirus pandemic has been held up as an example for other nations, even as it deals with a small uptick in cases. In October, to pay back some of its debt, the government-run Korea Foundation said it was sending its COVID-19 Survival Boxes  to 514 former Peace Corps Volunteers.

“Thanks in no small part to the help received from the Peace Corps,” the Korea Foundation’s president, Lee Geun, said in a letter ​in the box​, “Korea has since achieved an economic breakthrough.”

Nathan joined the Peace Corps after graduating from the University of Chicago. She was among the first Volunteers to arrive in South Korea and was assigned to Chuncheon, in the north, where she taught English at a local high school. She was 21. 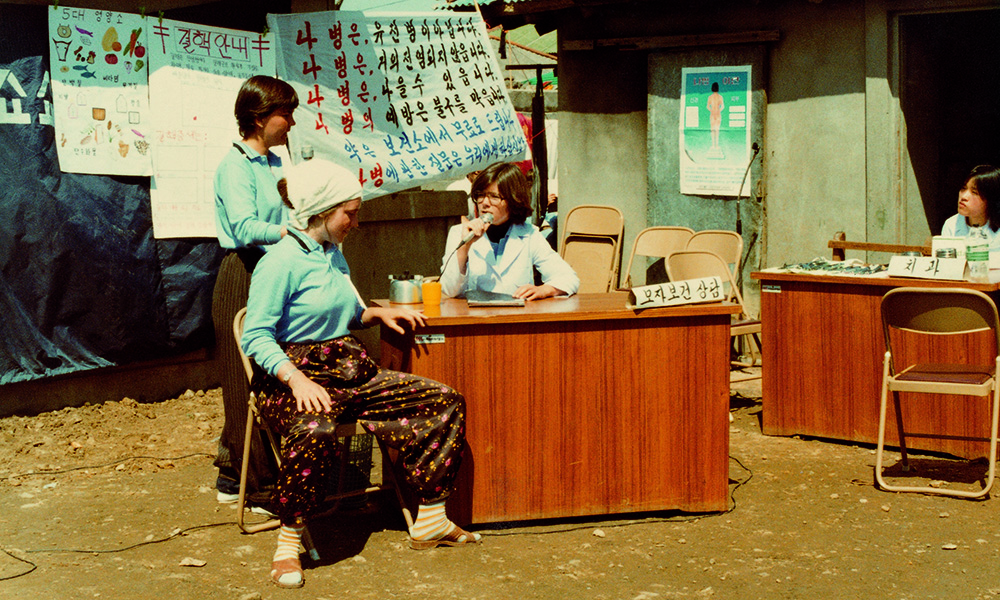 Health fair on tour: Volunteer Nancy Kelly (1979–81) dons a white coat to play midwife in a skit in which she talks with a pregnant woman and her mother-in-law, played by two fellow Volunteers, about maternal health and proper nutrition. Photo courtesy Nancy Kelly

The country around Chuncheon was beautiful​. Its pine trees were graceful, and azaleas covered its hills in spring. But most of the streets were dirt roads. Children went outside without shoes. After dark, Nathan could hear rats running across ceilings. Plumbing was generally nonexistent.

“An ongoing debate among Volunteers was whether Time or Newsweek was more absorbent,” Nathan said in an email interview. “Toilet paper was unavailable.”

Both magazines came with pages blacked out by government censors. Crude anti-communist propaganda was everywhere. During her stay in South Korea, North Korea captured a U.S. Navy ship, the Pueblo, off its coast and sent armed commandos across the border to attack the South Korean presidential palace. On winter mornings, Nathan broke the ice in a plastic container in order to wash. Her school was a sad and drafty place where classrooms were heated by a single charcoal stove.

“I began to feel uncomfortably cold so that when I was not teaching, I regularly followed the circling sun as it flooded through the windows around the school building,” she said. “Even when it was very cold, students did not wear coats to school or to morning assemblies, and probably no one had a coat.”

But Nathan developed strong emotional ties with her students, who were eager to learn English. She once took a poor and sickly girl to an American military doctor for treatment for intestinal parasites, a common problem in Korea back then. The girl’s mother later arrived at the school and presented Nathan with several warm eggs, soft gray feathers still attached.

“The eggs, which I am sure my student and her mother themselves needed, expressed such gratitude that I was close to tears,” she said.

The irony of the reversal of fortunes during the pandemic did not escape her. South Korea continues to keep the coronavirus largely under control, thanks in part to its aggressive contact tracing. Although it has recently faced a small rise in infections, it is nothing compared to what is happening in the United States, where Gov. Andrew M. Cuomo of New York has announced harsh new restrictions in Nathan’s home state. In August, she received the offer from the Korea Foundation to send her the gift box​. She accepted, wondering​ if it was merely a public relations stunt for the Korean government. 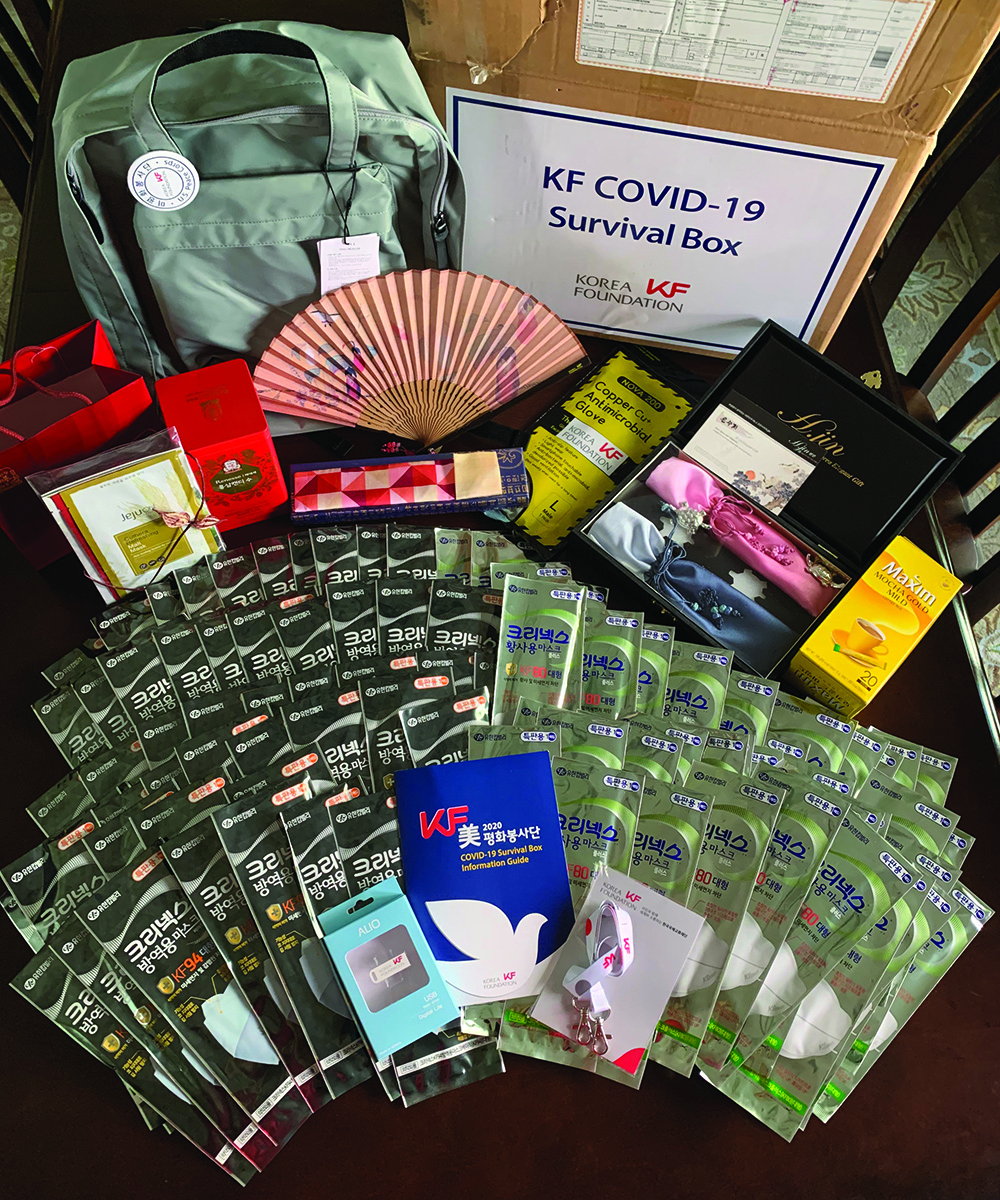 Contents may inspire: what’s inside the box. Photo courtesy Friends of Korea

“I did not think much about it until the box arrived on Saturday, November 7, ironically the day that the U.S. presidential election was called for Joe Biden,” she wrote.

Nathan said she delayed opening the package for about a week because she wanted to preserve the wonderful feeling that it gave her. In addition to the masks, the box also included gloves, skin-care products, ginseng candies, a silk fan and two sets of silver chopsticks and spoons with the traditional Korean turtle design.

“I am a practical person, not usually given to ideas unfounded by fact,” wrote Ms. Nathan. “But there was definitely something magical about the box.”

This story originally appeared in The New York Times. Reprinted with permission.

MORE TO THIS STORY

Communities across the United States have shared the stories of how returned Volunteers in their communities served with the Peace Corps in South Korea — and found their lives profoundly touched by this gesture decades later. We’ve gathered some of them here.