Serving as a Peace Corps Volunteer in Nigeria Changed Charles Larson’s Worldview. So He Embarked on a Life-long Journey to Bring Works by African Writers to U.S. Readers. 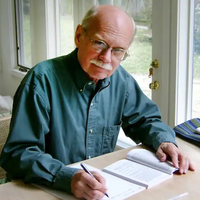 A remembrance: As a scholar, he profoundly shaped the study of African literature. And his work illuminated the pages of WorldView magazine for years.

When his papers were archived at the Harry Ransom Center at the University of Texas at Austin, African literature scholar Charles R. Larson told an interviewer that in two years teaching as a Peace Corps Volunteer, “Nigeria totally altered my worldview. When I returned home I was determined to see that works by African writers were reprinted in American editions.” He was true to that determination.

Larson, who served in the Peace Corps from 1962 to 1964 and died in May, was for more than 50 years a major influence in a movement to introduce the works of African writers to university classrooms across America — and to New York book publishing. He taught literature at American University in Washington, D.C. for 46 years.

For more than 50 years Charles Larson was a major influence in a movement to introduce the works of African writers to university classrooms across America — and to New York book publishing.

Longtime readers of WorldView were also beneficiaries when for 11 years Larson was our magazine’s books and fiction editor. He proposed the position when we first met at a 1995 Peace Corps gathering at the American University gymnasium. National Peace Corps Association had turned the magazine’s attention to giving its readers news, opinion, and reporting about current social, political, and cultural dynamism of the countries where we had served as Volunteers.

'Larson’s proposal was a perfect fit for the magazine and provided us with fresh and wide-ranging literary voices from the rest of the world. Beginning with his own article in 1996 about Nigeria’s celebrated writer and executed activist Ken Saro-Wiwa, Larson organized a cohort of returned Volunteers, academics, and published novelists, and poets and intellectuals from Africa, Latin America, and the Middle East to review half a dozen books in each issue of our magazine. We were enriched even more by his acquisition of WorldView rights to fiction from the likes of Somalia’s Nuruddin Farah, Lebanese writer Hanan al-Shaykh, Haiti’s Edwidge Danticat, Indian writer Meena Nayak, and many more.

Charles Larson broadened our worldview. The family requests that he be remembered by donations to National Peace Corps Association.

READ MORE tributes to Charles Larson in The Washington Post, on the American University College of Arts and Sciences website, and in  CounterPunch.