COVID-19: Putting a Face on the ‘Invisible Enemy’ 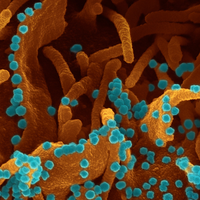 From her laboratory in the far western reaches of Montana, Elizabeth Fischer is trying to help people see what they’re up against in COVID-19.

Over the past three decades, Fischer, 58, and her team at the Rocky Mountain Laboratories, part of the National Institutes of Health’s National Institute of Allergy and Infectious Diseases, have captured and created some of the more dramatic images of the world’s most dangerous pathogens.

“I like to get images out there to try to convey that this is an entity, to try to demystify it, so this is something more tangible for people,” said Fischer, one of the country’s leading electron microscopists.

Now, as her renderings of the coronavirus flash across screens worldwide, she said: “You often hear people call it the invisible enemy. It’s trying to put that face out there.”

Working in one of the nation’s 13 “Biosafety Level 4” labs — those equipped to safely handle the most dangerous pathogens — Fischer and her team visualize the world’s deadliest plagues from Ebola to HIV, salmonella to SARS-CoV-2, the coronavirus that causes COVID-19. 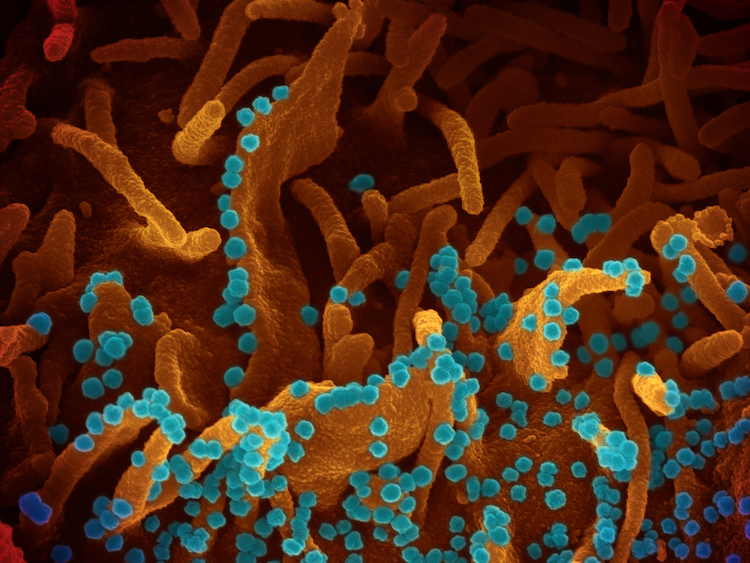 Viral particles being released from a dying cell infected with coronavirus. The dozens of small, blue spheres emerging from the surface of a kidney cell are the virus particles themselves. The images produced by the electron microscopes are actually black-and-white; a visual artist colorizes them. Image courtesy of Elizabeth Fischer

The breathtaking images allow people to see a virus as elaborate biological structures with weaknesses that can be exploited, yielding clues for researchers about how to develop treatments and vaccines.

“If there is a disease, we have seen it,” she said. 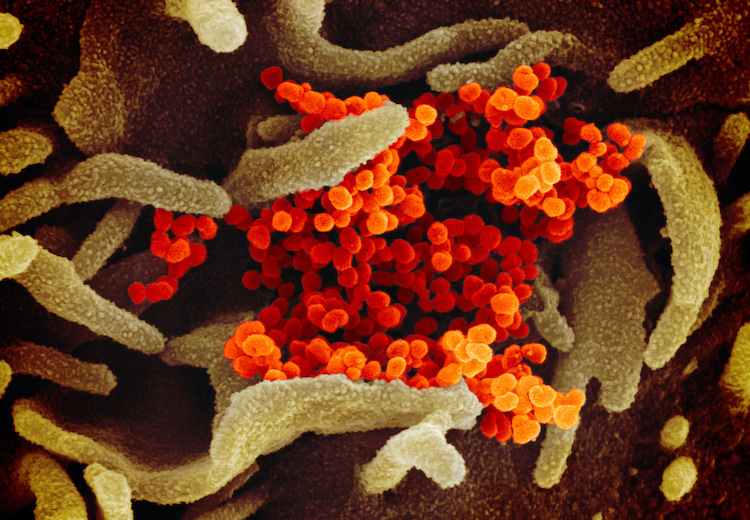 “Making SARS-CoV-2 tangible helps to demystify the challenges that all of us now face as a result of the COVID-19 pandemic,” NIH Director Francis Collins wrote on his blog in noting the value of Fischer’s images. “The hope is it will encourage each and every one of us to do our part to fight it, whether that means digging into the research, working on the front lines, or staying at home to prevent transmission and flatten the curve.” Image courtesy Elizabeth Fischer

Originally from Evergreen, Colorado, Fischer completed a degree in biology at the University of Colorado-Boulder and contemplated going to medical school, before deciding instead to join the Peace Corps. She taught math and science for two years in Liberia, and then took time to travel through East Africa and Asia, including a trek into the Himalayas.

Returning to Colorado, she immersed herself in the outdoor world she loved. She worked as a rafting guide on the Arkansas River for several summers, and as a children’s ski instructor at the Monarch Mountain ski resort during the winters. 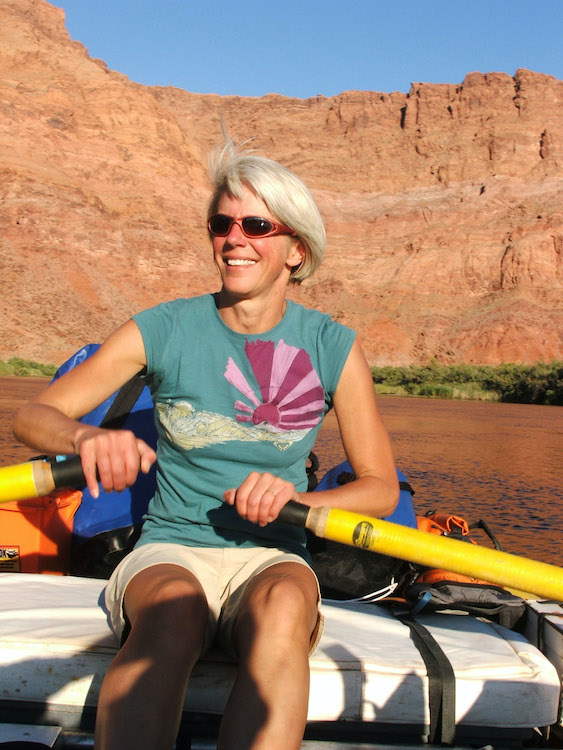 Macro and micro: Fischer’s work with microscopes reveals a hidden world. She has also worked as a rafting guide. Photo courtesy Elizabeth Fischer

She later enrolled in graduate school, thinking she might teach biology. But when she took courses in electron microscopy, she was hooked.

It appealed to her sense of exotic adventure. “You’re looking at a world that most people don’t get to see,” she said. She switched gears and completed a master’s degree in biology.

Upon graduation, she sent her résumé to a national microscopy job placement office and soon received a call from Rocky Mountain Laboratories. In 1994, she moved with her family to Hamilton, a city of fewer than 5,000 people about 50 miles south of Missoula, then worked her way up to become chief of the lab’s microscopy unit.

Some of the more stunning images of the coronavirus — about 10,000 times smaller than the width of a human hair — have come from Fischer’s microscope.

Some of the more stunning images of the coronavirus — about 10,000 times smaller than the width of a human hair — have come from Fischer’s microscope. One is Fischer’s photograph of viral particles being released from a dying cell infected with the virus.

As NIH Director Dr. Francis Collins highlighted in his blog earlier this year, the photo shows the orange-brown folds and protrusion on the surface of a primate’s kidney cell infected with SARS-CoV-2. The dozens of small, blue spheres emerging from the surface are the virus particles themselves. (The images produced by the electron microscopes are black-and-white, so Fischer hands them over to visual artists who colorize the image to help identify different parts of the cell and to distinguish the virus from its host.)

“This image gives us a window into how devastatingly effective SARS-CoV-2 appears to be at co-opting a host’s cellular machinery,” Collins wrote. “Just one infected cell is capable of releasing thousands of new virus particles that can, in turn, be transmitted to others.”

Scientists like Fischer have used electron microscopes to uncover the unseen world of viruses and bacteria dating to the 1930s. In the past two decades, however, new technologies have unleashed a resolution revolution, allowing researchers to see down to the near-atomic level. Microscopists have come up with better ways to prepare samples for viewing and have written sophisticated software programs to sharpen images. 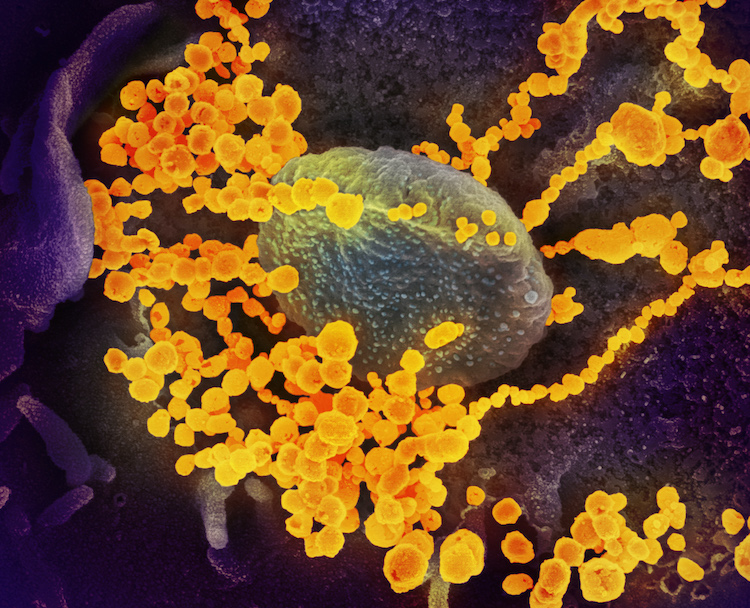 In early February the lab received material from one of the first U.S. patients to be infected with the novel coronavirus. Image courtesy Elizabeth Fischer

Through her lab, Fischer receives samples from all over the world, and was sent viral material in early February from one of the first U.S. patients to be infected with the novel coronavirus. Often, her samples come from vials that have been stored in a freezer for decades, or from cultures routinely grown in a lab. “It’s very sobering when you know it came from a human patient.” 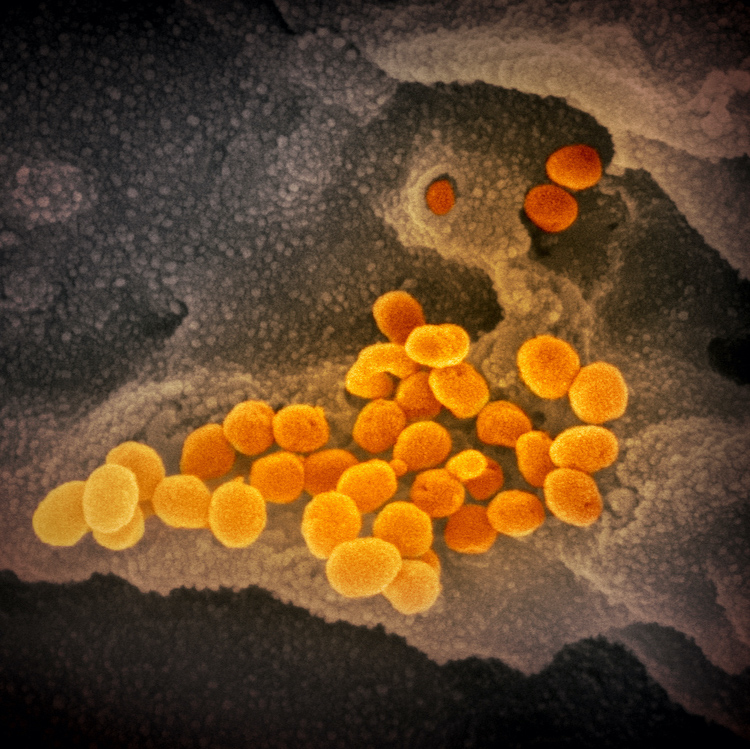 Significance of a sample: “It’s very sobering when you know it came from a human patient.” Image courtesy Elizabeth Fischer

For example, in 2014, a sister lab in Mali sent over an Ebola sample from a 2-year-old girl who had lived in Guinea when her mother died of the disease. Her grandmother traveled from Mali to attend the funeral, which involved touching and bathing the body, and to take the girl home with her. Both got infected and brought the virus back with them as they returned to Mali by public transportation. They both died. 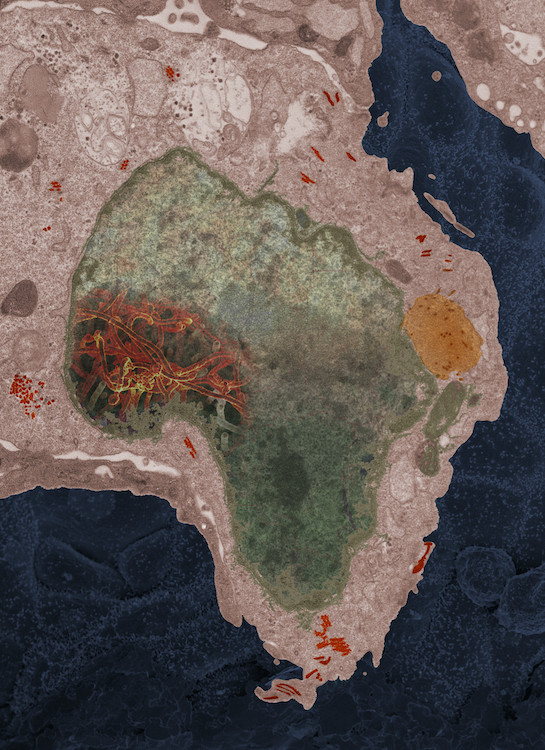 In 2014, Elizabeth Fischer received a sample of Ebola from a 2-year-old girl in Mali. The cell border and nucleus shape resemble the shape of the continent of Africa. Image courtesy Elizabeth Fischer

“This one particular cell, it looked like the continent of Africa,” Fischer recalled. “It was a very powerful moment. You see that virus growing in there, it takes you back around to not only the lab work we do, but that there’s an impact on human health.”

Despite the deadly nature of the viruses, she still appreciates the “beautiful symmetry in many of them,” she said, adding: “They’re very elegant, and they’re not malicious in and of themselves. They’re just doing what they do.”

This story was produced by Kaiser Health News, an editorially independent program of the Kaiser Family Foundation. It also appears in the Fall 2020 edition of WorldView magazine.