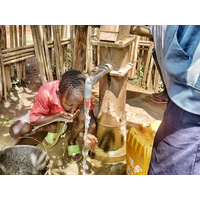 In 2011, the citizens of South Sudan declared their independence after their second civil war had lasted 20 years. As the newest nation in the world, it is sadly also among the poorest. Having suffered internal conflict since its independence, water shortages and access to clean drinking water become a paramount issue in the wake of this nation's survival for its people and transition to peace.

Through our ongoing partnership, National Peace Corps Association (NPCA) and Water Charity have prioritized projects supporting the rehabilitation of refugee communities such as those in South Sudan. Collaborating with the county commissioner of Yei River County, and working through our South Sudanese field partner, Water is Basic, we implemented the drilling and rehabilitating of boreholes in local communities.

Phase One rehabilitated 10 wells and replaced broken hand pumps. Together with Water is Basic, we held five-day workshop trainings for 48 committee members on borehole operation and maintenance that resulted in over 760 households and more than 6,500 people gaining access to clean water.

With Phase One complete, NPCA and Water Charity are excited to move onto Phase Two of the South Sudan Well Rehabilitation Program. There is an opportunity to do as many as 100 well restorations per year if the resources are available.

Water changes everything. As the South Sudanese people are able to access clean water, there has been a transformation of life and health. Death rates fall and education rates rise. Access to food is increased and local economies grow. Ancient conflicts over water rights and access become obsolete as peace sweeps through areas where water shortages once caused civil war and conflict.

Join the Peace Corps community as we engage in making the greatest impact working with refugees both domestically and abroad!

Peace Corps Beyond 2016 provides a forum for the greatest voices, expertise and insights to come together. Join the discussion with former Peace Corps staffer Barbara Busch, RPCV Valerie Kurka (Tanzania 2006-08), and RPCV Averill Strasser (Bolivia 1966-68) as they delve into direct assistance overseas, support for refugee resettlement efforts in the Sudan, Eritrea, the United States and elsewhere, and advocacy efforts to support refugee issues.