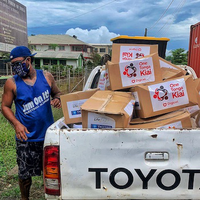 In the aftermath of disaster, raising awareness and funds to support community-driven response

By Michael Hassett and Chiara Collette

Relief supplies for communities devastated by the eruption and tsunami. Photo by Drew Havea

On January 15, an underwater volcano erupted in the Kingdom of Tonga in the South Pacific, sending a wide plume of soot and gas miles into the air. The eruption was so enormous that it was heard as far away as Alaska and was seen from space. The island group of Ha‘apai, where the eruption occurred, was battered. Forty miles south, tsunami waves crashed into Tongatapu, the largest and most populous island in Tonga, and devastated much of its northern coast. Nearby, the island of ‘Eua’s western coast was also hammered. 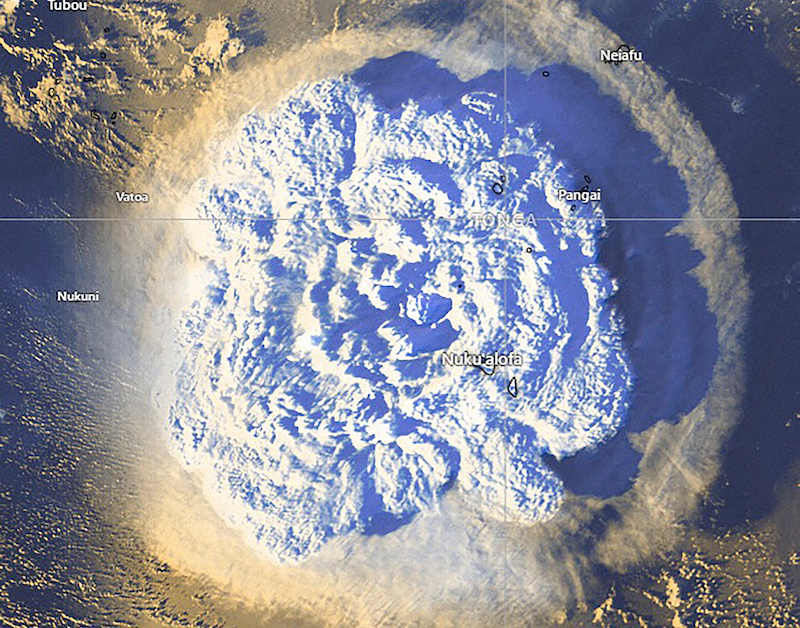 In the immediate aftermath of the Hunga Tonga–Hunga Ha‘apai volcanic eruption, much was unknown; the fiber-optic cable that connects Tonga to the rest of the world was severed. While local telecommunication companies scrambled to reestablish communication, information was slow to trickle out. What was immediately clear: The Kingdom of Tonga was now a household name, and the recovery efforts would take years.

Miraculously, there were only a handful of fatalities. But damage to property was extensive; the outer island of Mango lost every home, and other islands incurred significant damage, which has resulted in at least four outer-island communities being evacuated to Tongatapu.

As the dust and volcanic ash settled, it coated everything, affecting both food and water security. Many Tongans are subsistence farmers, and the salt water from the tsunami and the ash from the volcano have spoiled large swaths of farmland. Likewise, the vast majority of drinking water comes from rainwater collected via roofs of homes and stored in collection tanks. The ash contaminated water tanks and turned water into lye.

The outpouring of support from across the Peace Corps community and around the world has been inspiring and breathtaking.

Within 48 hours of the eruption, Friends of Tonga began raising money to support disaster relief efforts. The outpouring of support from across the Peace Corps community and around the world has been inspiring and breathtaking. Many organizations, celebrities, and athletes — including the UFC fighter Ronda Rousey, the rugby star Charles Piutau, and the Bristol Bears, Wales Scarlets, London Saracens, and Guernsey Raiders rugby clubs — have publicly endorsed us. We have already used this increased recognition to raise awareness on behalf of Tongan communities and have already invested this financial support into targeted and accountable interventions to uplift affected communities. 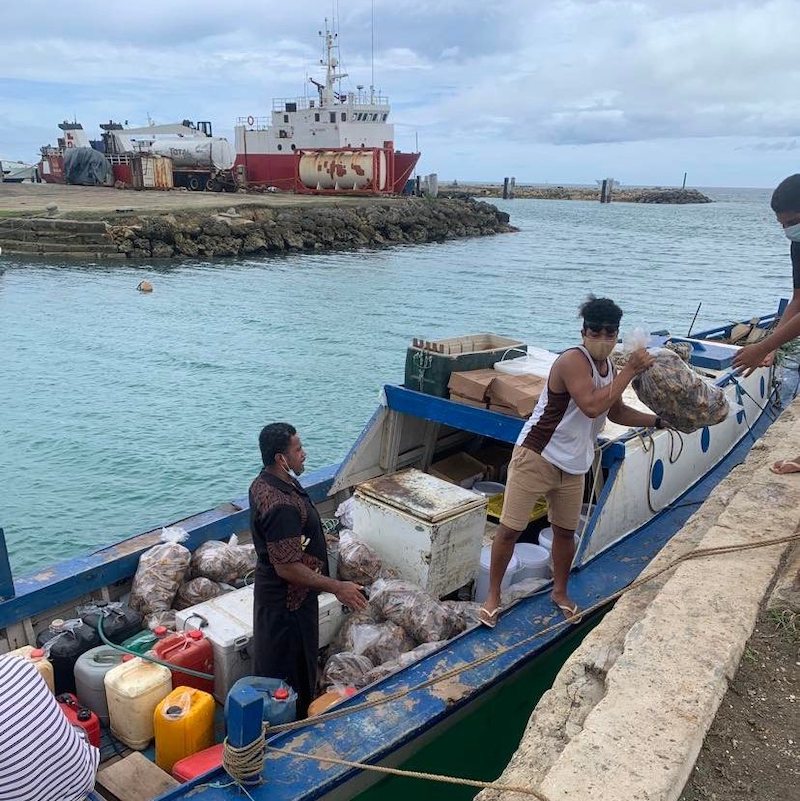 Food for the outer islands of Fonoi and Nomuka, which were cut off from supplies for two weeks. Friends of Tonga funded the harvesting of food and transportation of these cartons through the Civil Society Forum of Tonga’s innovative Cash for Crops program. Photo by Drew Havea

Our disaster relief efforts are driven by Tongan organizations and local stakeholders that can best guide equitable and responsible resource allocation to target communities with the most need. To date, Friends of Tonga has transferred $30,000 to support programming and projects led by both the Civil Society Forum of Tonga (CSFT) and the Mainstreaming of Rural Development Innovation Trust (MORDI). We have funded water, sanitation, and hygiene services programs targeting food security and agricultural resilience, as well as mental health services.

Once communities have stabilized, Friends of Tonga intends to support the Ministry of Education to rebuild the schools that were destroyed and replace them with weather-resistant structures.

Though the news cycle has moved on, the Kingdom of Tonga still faces multiple crises, now including COVID-19. Until this year, Tonga was one of a few fortunate countries that did not have a single recorded case of community spread. But the flood of relief services from outside countries changed that; cases have quickly spread and spiked. At the time of writing, Tonga is currently under lockdown with 3,784 reported cases of COVID-19 and two deaths. This has significantly complicated relief efforts, which will have further implications in itself.

These crises will take years to mitigate. Friends of Tonga will be there for the duration, supporting community-driven initiatives and advocating for the Kingdom of Tonga and her people.

Learn more about Friends of Tonga and how you can help.

Michael Hassett served in Tonga 2012–14 as an English language facilitator in the village of Fahefa, Tongatapu.

Chiara Collette served 2012–14 in the village of Ta’anga on the island of ‘Eua as an English language facilitator, teacher, and teacher trainer.