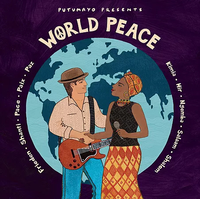 It begins with contemporary blues artist Keb’ Mo’, who recorded a moving version of the 1975 classic “Wake Up Everybody” with its inspirational lyrics “there is so much hatred, war and poverty… the world won’t get no better, we gotta change it, just you and me.” Following Keb’ Mo’, we hear a call for Africans to come together to achieve peace and prosperity in “Africa Unite” by Swaziland’s Bholoja. Renowned singer-songwriter and activist Jackson Browne wrote and recorded “It is One”: “It is one world spinning ‘round the sun, this life is a battleground between right and wrong.” Cameroonian musician Richard Bona and jazz star Michael Brecker follow with their rendition of Bob Marley’s powerful “Redemption Song.”

The legendary Nina Simone recorded her version of the civil rights anthem “I Wish I Knew How It Would Feel to Be Free” in 1967 after an Alabama church bombing and the civil rights struggle moved her to address these issues. The album continues with the Keb’ Mo’ recording of the classic peace anthem “Love Train.” Then, 4-time GRAMMY-winner India.Arie sings “One,” in which she calls for a celebration of the similarities that bring human beings together.

We next head to South Africa for Bongeziwe Mabandla and his song “Freedom for Everyone.” Mabandla asks “Oh, what is freedom if there’s no freedom for everyone?” We then turn to the Palestinian/Israeli singer Mira Awad’s beautiful ballad “Think of Others,” a musical adaption of the poem by Palestinian poet Mahmoud Darwish. Awad sings, “Do not forget those who seek peace… those who have nowhere to sleep.”

The album closes with two powerful ballads. On “East Jerusalem/West Jerusalem,” Israeli  singer-songwriter David Broza is joined by Haitian-American star Wyclef Jean. They sing, “Spread a little love before you put your head down, maybe when you wake up, the world will be a better place.” The album concludes with John Lennon’s beloved peace anthem “Imagine,” sung by Playing for Change and featuring artists from Brazil, India, Nigeria, Nepal, and beyond.

World Peace seeks to remind people of the importance of peaceful coexistence and freedom. As President Kennedy concluded in his June 10, 1963 address: “We shall do our part to build a world of peace where the weak are safe and the strong are just.”

2% of Putumayo’s proceeds from the sale of this album will be donated to the National Peace Corps Association in support of their efforts to amplify the Peace Corps community’s global social impact.