Pandemic has changed our community forever. Another disease we must fight: racism itself. 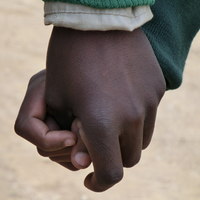 DO YOU REMEMBER WHERE YOU WERE when you heard the news? That the U.S. Peace Corps had made the difficult and unprecedented decision to suspend programs indefinitely, evacuating 7,300 volunteers serving in more than 60 countries due to coronavirus, and informing them that their service had ended. That more than 100,000 Americans had died from COVID-19.

That more than 40 million had applied for unemployment. That George Floyd had died after a policeman in Minneapolis pressed a knee on his neck for 8 minutes and 46 seconds. But George Floyd’s name is only one of a terrible litany of Black men, women, and children who have died at the hands of police.

Our nation is reeling. How could it not be?

HERE AT HOME, the toll of coronavirus has hit Black and Brown communities particularly hard. So have job losses. In a time of global pandemic, we’re faced once more with a brutal truth articulated years ago by Sargent Shriver, who founded the Peace Corps: “We must also treat the disease of racism itself.”

How do we do that? Fundamentally, those of us in the Peace Corps community embark on service as Volunteers to promote world peace and understanding. This is our world, right here. One where empathy and justice must guide us — as we head out into the world, as we bring it back home. Our commitment to that doesn’t stop at the border. As National Peace Corps Association Board Director Corey Griffin has often put it, “By living out Peace Corps values here at home, we’ll have a better society, one that honors and celebrates our differences.”

Systemic racism is an issue much bigger than our community. But we need to do what we can. Because both within the Peace Corps community and outside of it, Black Lives Matter. We have a moral obligation to use our stature as a community — and the credible voice, when it comes to speaking for peace and understanding — to lead by example in proactively fighting against unjust and unequal treatment of people of color.

Evidence of racial inequity exists in many forms. The COVID-19 pandemic has further exposed deep systemic problems in our country. Continued violence and police brutality against the Black community has ignited protests coast to coast — and internationally. And while the ongoing struggle for racial equity and social justice resonates strongly with core Peace Corps values, Volunteers of color continue to share challenges of racism, bias, and exclusivity, describing experiences during recruitment, in service, and after returning home. That is true of Volunteers who served decades ago — and those who just evacuated.

As part of a vibrant and engaged community, we’ve listened to and been inspired by voices calling on Peace Corps to do and be better. We know that we at NPCA need to hold ourselves accountable as well. We’ve heard questions from RPCVs wanting to know historical data: How many Black Volunteers have served? More than that, we’ve heard from Black Volunteers asking: Will you stand with us? Will you support us? Will you lead to help make the changes we need to make?

We’ve heard from Black Volunteers asking: Will you stand with us? Will you support us? Will you lead to help make the changes we need to make?

We must. We are. And we will. For those of you who receive our email newsletter, you’ve already seen the statements and action plans NPCA leadership has put in place. We’ve launched a digital hub for news, events, stories, and resources focused on racial justice in the Peace Corps community. In June we co-sponsored a panel on “A Moment to Lean In: Courageous Conversations on Racial Equity in International Service.” But this is only the beginning of the work we have before us.

We’ve already heard from some Volunteers who served across the decades that they are heartened to see that we are grappling with the fact that the agency and our community need to take a stand against systemic racism. It’s long overdue. They note that the sense of cause and purpose that comes with this effort is what inspired them to join the Peace Corps in the first place. Motivated by equity and justice, this kind of commitment can and does change lives and communities, institutions and systems.

BACK IN MARCH, when Peace Corps brought Volunteers home, the agency’s top priority was ensuring Volunteers’ safety and security. But many returning volunteers felt like they had been fired and left with no benefits and little support as they arrived home.

To its credit, over the past several months the agency focused squarely on the complex process of seeking to ensure that the evacuated Volunteers had some safety net. Meanwhile, the broader Peace Corps community, which includes some 250,000 Returned Peace Corps Volunteers over the past 59 years, rallied to welcome and support the evacuated Volunteers. NPCA ramped up a number of programs to help.

Having left my rural Missouri home to serve as a Peace Corps volunteer in Guatemala from 1988 to 1991, I felt a visceral connection with the 169 volunteers preparing to leave Guatemala. I spoke with them on video chat. They shared personal stories and photos on social media, trying to come to grips with what it means to be evacuated from the schools and host families and wider communities they were part of. As they said their goodbyes, I imagined many of them pledged to return. One day they will — as Volunteers once more, or as their life journeys wind back there in years to come.

But some big questions loom. One role that Volunteers play time and again, in building their relationships with communities, is helping those communities better understand the diversity and complexity of the United States and its people. How well will this country be living up to its ideals when Volunteers do return?

I often say that we seek to make Peace Corps be the best that it can be. That includes bearing witness to inequity in our work around the world — and bringing that understanding back home.

With that in mind, this summer we have hosted a series of events: Peace Corps Connect to the Future. We convened a series of eight town hall meetings on topics ranging from diversity, equity, and inclusion to Peace Corps policies for a changed world. Then, to bring together ideas from all the town halls, we hosted a half-day summit on July 18. Here’s a video of the entire summit. Building on that, we’ll be shaping policy recommendations and an action plan for the Peace Corps community. Those will carry us into the months and years ahead.

Peace Corps’ underlying mission — to promote world peace and friendship — is as vital today as it was when the program began nearly 60 years ago. But as the past few months have made painfully clear, the importance of that work here at home is more critical than ever. I often say that we seek to make Peace Corps be the best that it can be. That includes bearing witness to inequity in our work around the world — and bringing that understanding back home.

Curtis Valentine, an education policy expert, served as a Volunteer in South Africa from 2001 to 2003 — the only African American man in his cohort. His own intimidating encounters with U.S. police as a young man are documented alongside those of 99 other Black men in the book The Presumption of Guilt. A few weeks ago he was talking with WorldView editor Steven Saum. “Everyone who has served has a story about an injustice,” Valentine said, “whether it be racial, whether it be gender, whether it be socioeconomic, religious … something as Volunteers we saw and said: ‘This is unacceptable.’ I think we are uniquely qualified and prepared to respond in our own country because of our experience around the world. And in many ways, we have an obligation to do so. This is our time.”

The original version of this essay appeared in the Summer 2020 print edition of WorldView, published in July.