A Memoir of a Journey from a Farming Village in Togo to Study in the U.S. And a Tribute to a Father Who Was Orphaned Before the Age of Two. 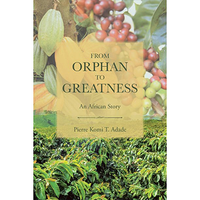 From Orphan to Greatness

“All his life, my father has done everything he could to help his children succeed,” writes Pierre Komi T. Adade. “As he likes to tell us, ‘My main goal in life is to help you succeed whatever the cost so you won’t have to suffer the way I did. I wasn’t fortunate enough to have someone help me.’ Yes, indeed, his life story has been full of tough experiences that bring him to tears whenever he talks about them. My father lost both his parents before the age of two. Thankfully, he was blessed by several miracles that saw him through those hard times.”

And so when Adade calls his memoir From Orphan to Greatness, he is first and foremost telling the story of his father. As for Adade’s own journey: It was the Peace Corps that led Volunteer Tom Buchanan “to my small farming village of Agadji in Togo, West Africa, in 1981,” Adade writes. “This young American sponsored me into the United States in June 1989, a fulfillment in itself of my father’s secretly held dream to see one of his children educated in an English-speaking country, better yet in the United States of America. Education has always been very important to my father because he was denied that opportunity due to being an orphan at a very young age. He wished to attend school and become a lawyer or doctor, but instead, he was forced to become a farmer and eventually one of the best-known coffee growers in Togo.”

As Adade also tells, a decade later he was able to invite his father for a visit to the U.S. — and enroll him at a local college. Adade’s parents’ commitment to family has been instrumental to him. Which is why he has written a biography of them as well as a recounting of his own story.