Peace Corps Must Do Better in Addressing Sexual Assault 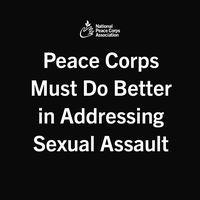 An in-depth work of investigative journalism has shone light on a horrific problem. There are steps we can take now. A statement from the Chair of the Board of Directors of National Peace Corps Association.

Today USA Today published an in-depth investigative piece chronicling the experiences of multiple women who have been victims of sexual assault while serving as Peace Corps Volunteers. Their stories are devastating. And the statistics cited in the article about the prevalence of sexual assault are profoundly disturbing.

We owe it to these women to read their stories — and to truly hear what they are saying. Those of us who have been victims of sexual assault know firsthand that it takes immense courage to come forward, especially given how the initial reports of these women were handled. And let us be unequivocal: There must be zero tolerance when it comes to sexual misconduct within the ranks of Peace Corps staff.

We owe it to all Volunteers — past, present, and future — as well as their families, to ensure that Peace Corps does better.

Peace Corps Acting Director Carol Spahn issued a statement today outlining how the agency is addressing these very serious issues. All of the incidents chronicled in the story have been referred to the Peace Corps Inspector General for investigation. And Spahn has made sure that returned Volunteers know they can reach out directly to the Inspector General, as well as to the agency.

We underscore that call throughout the Peace Corps community: We must ensure your voices are heard. And on behalf of myself, the board and staff at National Peace Corps Association, we want you to know that you can reach out to us as well. We are here to listen — and to support you.

Following the Letter of the Law

Just a few weeks ago, at an event marking the 60th anniversary of the Peace Corps, former Peace Corps Director Carrie Hessler-Radelet recounted once again how, while she served as a Volunteer in Western Samoa in the 1980s, she was a victim of repeated sexual assault by a Peace Corps staff member. And again, she recounted how the Peace Corps failed to take action.

Since that time we know that progress has been made. The Kate Puzey Act led to the establishment of a sexual assault advisory council in 2013. The Sam Farr/Nick Castle Peace Corps Volunteer Protection Act was passed in 2018 and includes strengthened criteria for hiring overseas doctors and medical support staff and lays down a number of critical requirements:

In this moment, when there are no Volunteers in the field, it provides an opportunity and a responsibility for Peace Corps to conduct a thorough review of the Farr/Castle law and other previously passed legislation to ensure full compliance in all aspects. We are very concerned that this is not the case at this time.

The statement issued today by the Peace Corps notes that a new Security Incident Management System is being deployed. We know from conversations with the agency that, in lay terms, this will integrate systems for reporting and tracking sexual assaults and other crimes. That is part of the solution. A broader effort on implementing better tech-driven systems to serve Volunteers and communities is also underway while there are no Volunteers in the field. But, again, this is only part of the solution.

We Must Protect Whistleblowers

What is also part of the solution: legislation introduced to the House of Representatives on March 1 — H.R. 1456 — which provides whistleblower protection for Volunteers. As noted by bill sponsor John Garamendi (D-CA), the bill “Extends whistleblower and anti-retaliatory protections that currently apply to Peace Corps contractors to Peace Corps Volunteers, including protections against reprisals by any Peace Corps employee, Volunteer supervisor, or outside contractor.” This legislation also directs the Peace Corps and U.S. State Department’s Bureau of Diplomatic Security to update plans and protocols for Peace Corps Volunteer security support and protection in foreign countries.

As Emma Tremblay, one of the women who shares her heartbreaking story in the USA Today piece notes, passing this legislation is one way to show support for her and other Volunteers.

We know that beyond this legislation much work remains to be done. And we know that it is our responsibility as engaged members of the Peace Corps community to ensure that efforts continue. After all, it is in the mission of National Peace Corps Association to ensure that Peace Corps is the best that it can be. An agency where sexual assault metastasized in recent years has tremendous work to do.

It shouldn’t escape notice that April is sexual assault awareness month. This is not something that we should think about in the abstract. Every victim of an assault — like the women who share their stories in this article — is a person whose life has been deeply harmed.

It should not escape notice that only this week Kathy Buller, Peace Corps Inspector General — and executive chair for the Council of the Inspector General on Integrity and Efficiency’s legislation committee — was testifying before Congress regarding the importance of the independence and reinforcement of the work by inspectors general throughout the government.

And it absolutely should not escape notice that, while this particular USA Today piece focuses on the stories of women who are white, Peace Corps and others must ensure that victims who are people of color receive the full support throughout their service and afterward. Racial justice and equity demand it.

Let’s take to heart what legal scholar Catharine MacKinnnon wrote in The Atlantic two years ago, reflecting on the rise of the #MeToo movement: “Conceive a revolution without violence against domination and aggression. Envision a moment of truth and a movement of transformation for the sexually violated toward a more equal, therefore a more peaceful and just, world.”

Maricarmen Smith-Martinez is Chair of the Board of Directors for National Peace Corps Association. She served as a Volunteer in Costa Rica 2006–08.