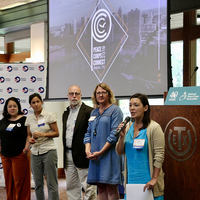 What happens when hundreds of members of the Peace Corps community get together to discuss innovation, collaboration, and service? An exhilarating two-and-a-half days of conversation on topics ranging from immigration to social media, economic development to climate change, and everything in between.

"What starts here changes the world." As our co-host, the  Heart of Texas Peace Corps Association (HoTPCA), pointed out, this University of Texas at Austin saying applies to the shared Peace Corps experience and inspired attendees to be curious, go beyond expectations, and take what they learned in Austin back to their home communities. 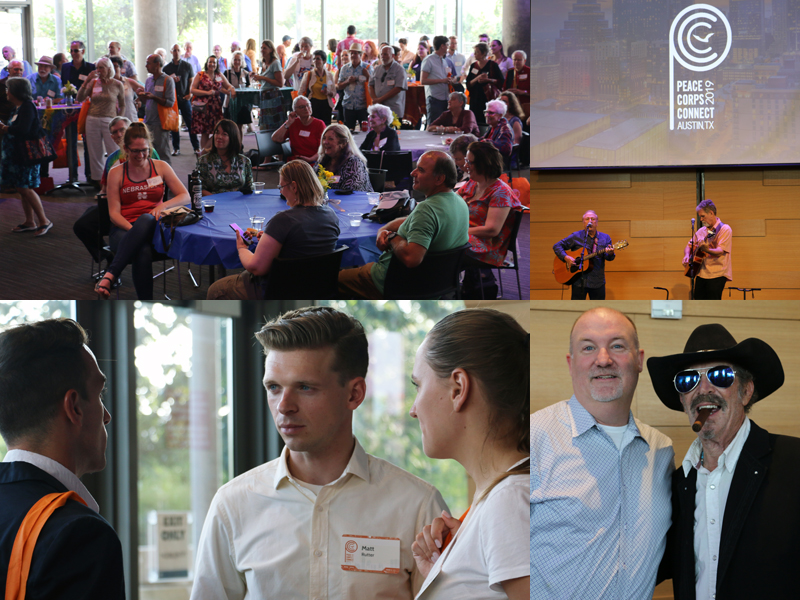 The conference officially kicked off on Thursday, June 20th at the Austin Central Library with live music from RPCVs Kinky Friedman and Doster and Engle.

On Friday, the opening plenary session featured a conversation with Peace Corps Director Jody Olsen and NPCA President Glenn Blumhorst. Afterwards, they signed a Memorandum of Understanding to renew the organizations’ commitments to support the Peace Corps’ mission and continue to implement initiatives that educate the public on Peace Corps programs. “The signing of this memorandum gives returned Peace Corps Volunteers a framework for a lifetime of service,” said Jody Olsen. “I ask every person at this conference to be strong as you talk about your volunteer experiences. You are key to the next generation of Peace Corps Volunteers.” 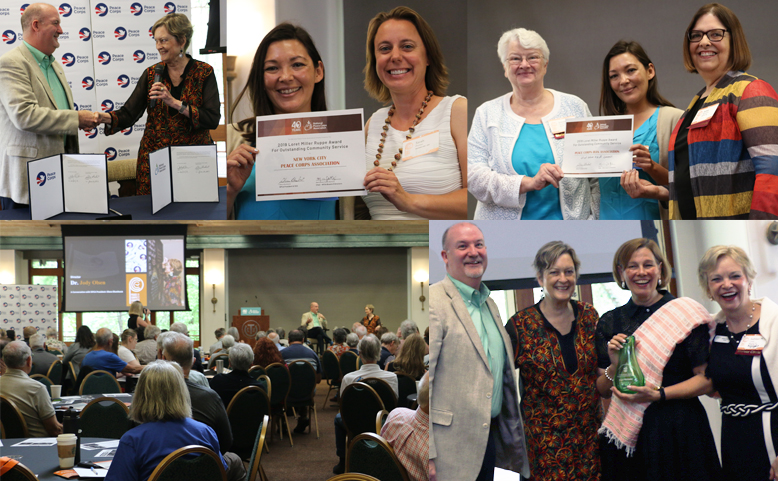 Whether you served decades ago or are a recently returned Volunteer, the conference offered tremendous value and networking opportunities. The community content sessions and workshops focused on a variety of topics, including how to use technology to launch a business, innovations in global issues advocacy, transition assistance for recent RPCVs, how to harness market forces for social impact, and ways to work together to create positive political change in era of "America First." As Tom Lightbown (RPCV Niger 1965-1967) pointed out: "We made some new friends, including youngsters fresh out of service, discovered RPCVs with white hair from other countries of service with stories to tell, made some quite important contacts of value to our Guinean friend Ahmadou Baldé, and, overall, had a very positive first experience with Peace Corps Connect."

The energy throughout the conference was palpable, as well as the level of engagement. With interactive sessions such as "Stepping Up - Politics: The Next Level of the Third Goal" and "Be an RPCV Changemaker: Connecting via the Web to Spark Community and Economic Development in Your Peace Corps Site" participants learned strategies on how to be catalysts for change, both at home and abroad.

"The PC Connect Conference was both informative and inspiring. The theme of the conference was “Innovation for Good" and the breakout sessions highlighted many RPCV created programs, companies, and NGOs that contribute to that objective." - Greg Polk (NM RPCV)

During the Affiliate Group Network Annual Meeting, the new Divisional Board Directors were presented and representatives from NPCA Affiliate Groups shared resources and opportunities to help groups thrive.

On Saturday, June 22, NPCA Board Director Katie Long kicked off the Annual General Membership Meeting with a special Peace Corps ukelele rendition of "You Can't Always Get What You Want," while NPCA Treasurer Patrick Fine provided a report on the financial status of the organization, and President Glenn Blumhorst outlined the successes of the past year.

During the Pitch Competition, six entities pleaded their case for a chance to win a $2,500 cash prize. The finalist were:

Each finalist was scored based on their demonstrated social impact, innovation, sustainability, leadership, presentation, and clarity of concept. Ultimately, Jump Finance took the top prize. 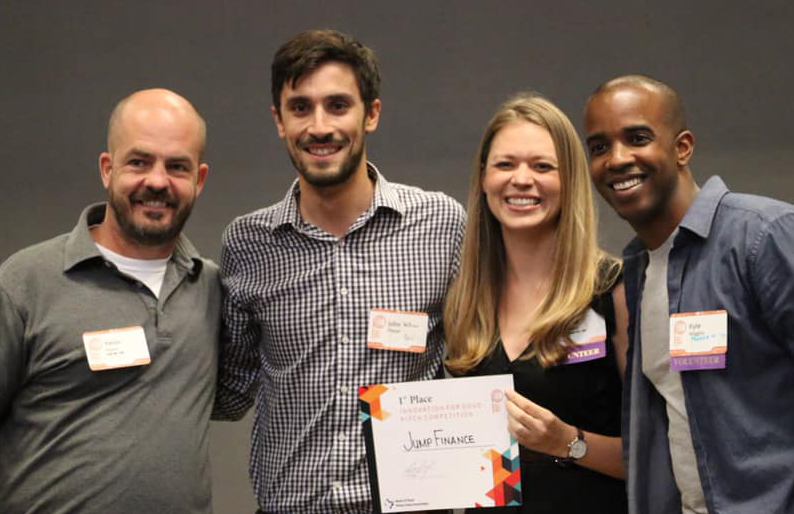 Attendees where also treated to a special excerpt from A Towering Task: A Peace Corps Documentary and a conversation with Director Alana DeJoseph who announced the premiere screening of the documentary is slated for September 22 at the Kennedy Center for the Performing Arts in Washington, DC.

During the closing plenary, Karen Keefer, NPCA Board Emeritus and Shriver Leadership Circle member, presented Liz Fanning with the 2019 Sargent Shriver Award for Distinguished Humanitarian Service for her tireless efforts to create and expand CorpsAfrica, a nonprofit organization that gives young Africans the opportunity to serve like Peace Corps Volunteers in their own countries. 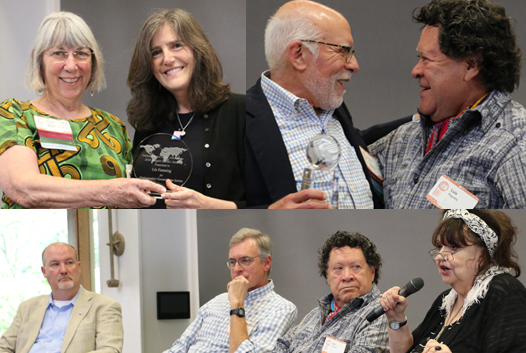 The conversation then turned to a panel discussion examining the historic exodus from Central America and the humanitarian crisis at the U.S. southern border. Reflecting on the special screening of ABRAZOS earlier in the day, a film by Luis Argueta that shows the transformational journey of a group of U.S. citizen children of undocumented immigrants who travel from Minnesota to Guatemala to meet their grandparents—and in some instances their siblings—for the first time, NPCA President Glenn Blumhorst moderated a panel titled "Beyond Borders" featuring Maria Martin, Director of The Graciasvida Center for Media; John Burnett, Southwest Correspondent for National Public Radio; and Luis Argueta, acclaimed Guatemalan Film Director and Producer. The panelists underscored the need for policy solutions and the opportunities for the Peace Corps community to take action.

"We need to humanize immigrants. The global community needs to fight fiction with truth." - Luis Argueta

After the panel, Ken Lehman, NPCA's Advisory Council Member, presented Luis Argueta with the Harris Wofford Global Citizen Award. Lehman, in nominating Argueta for this award, noted that Argueta “has demonstrated that filmmakers from the developing world can produce world class stories illuminating important issues… [H]is involvement in the entire issue of Latino immigration has humanitarian dimensions, and civic meaning.”

In accepting the award, Argueta said "tell those who are fearful of people who are not like them about your host families" and challenged us to change the immigration narrative "from one of hate to one of love...we need to remember to practice the Golden Rule."

As the conference drew to a close, HoTPCA President Sally Waley announced Seattle as the host city for Peace Corps Connect 2020! She handed the "baton" over to Seattle Area Peace Corps Association (SEAPAX) President Brad Cleveland. The conference will have an emphasis on immigrants and refugees and will be centered around “Cultivating Connections.” While the exact dates are yet to be determined, SEAPAX leaders indicated they are looking for dates in the summer next year. Stay tuned for more information! 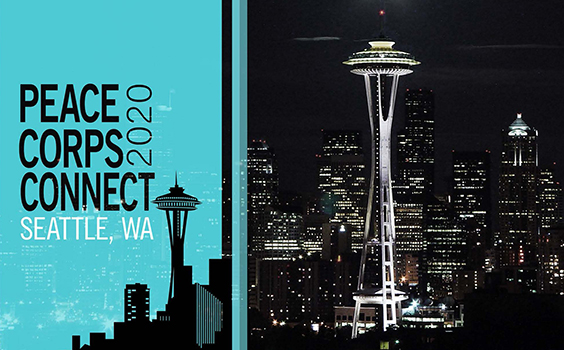