One Year Later: the Unprecedented Evacuation of Peace Corps Volunteers from Around the Globe 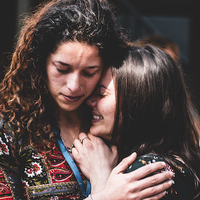 Communities and Volunteers feel the trauma of this disruption. But the pandemic has underscored even more profoundly that we need to foster global solidarity and understanding. An open letter to the Peace Corps community.

Around the world in recent days, we have been marking a truly somber anniversary: It was just over a year ago that the World Health Organization declared COVID-19 a pandemic. For the Peace Corps community, the burgeoning health crisis led to something unprecedented as well: On March 15, 2020, the decision to evacuate all Peace Corps Volunteers from across the globe.

All told, some 7,300 Volunteers were evacuated from more than 60 countries. Sometimes with just hours’ notice, they were told they needed to pack and leave.

Communities were bereft; Volunteers were heartbroken, stunned. At the same time, so many rose to the occasion — communities and returned Volunteers alike, reaching out in solidarity in a time of need. Here at National Peace Corps Association, we quickly brought online the Global Reentry Program to assist this surge of Volunteers — who were coming home to a country hit by pandemic and economic turmoil. And soon, too, it was a country wracked by protests against racial injustice.

It’s important to pause and acknowledge the enormity of this disruption.

On this day, it’s important to pause and acknowledge the enormity of this disruption. For those who are part of the Peace Corps community, I would encourage you to reach out to evacuated Volunteers and communities where they were serving. As the 240,000 of us who have served realize, the Peace Corps is profoundly about personal interactions and connections, built up over weeks and months and years. Rupturing those connections because of a crisis is deeply traumatic.

NPCA’s Global Reentry program continues to work with many evacuated Volunteers, and it is envisioned to become a truly robust resource for the entire Returned Peace Corps Volunteer community, providing guidance, advice, and support in tumultuous times. It’s one more way to build connections at a time we so desperately need them.

Amid pandemic: celebration, legislation, and a road map for the future

At the beginning of March, people and organizations around the world celebrated the establishment of the Peace Corps by an executive order issued by President John F. Kennedy on March 1, 1961. We heard congratulations from U.S. Secretary of State Anthony Blinken and the Ambassador of Colombia to the United States. We heard from the State of Colorado and the city of Madison, Wisconsin. We heard from governors and senators and representatives across the country. We heard congratulations from Ghana and Germany, Fiji and Korea. The anniversary of the founding of the Peace Corps is a time to recognize the powerful impact of service in communities — and how that has been felt across countries and generations.

Even more important, it’s a time to look to the future and to ask: How will the Peace Corps work in a changed world? And, as the United States reengages with communities and nations outside its borders, how can the Peace Corps help lead the way?

The report and the team at NPCA have also helped inform the most important piece of Peace Corps legislation in years.

Last year the Peace Corps community came together in a series of town halls and a Global Ideas Summit to reimagine, reshape, and retool the Peace Corps. The fruits of those intensive discussions were the community-driven report, “Peace Corps Connect to the Future,” which provides a roadmap for change. As the Peace Corps agency continues to assemble its new leadership team and tackles strategic planning, that report provides guidance.

The report and the team at NPCA have also helped inform the most important piece of Peace Corps legislation in years. Two weeks ago, on Monday, March 1, Rep. John Garamendi, who served as a Volunteer in Ethiopia, introduced the Peace Corps Reauthorization Act of 2021 in the House of Representatives. National Peace Corps Association worked with Rep. Garamendi’s office to help understand and address key priorities expressed by the Peace Corps community.The legislation calls for important reforms, including issues addressing better healthcare and protection for whistleblowers in the Peace Corps. And it takes seriously an increase in funding that will be necessary for the Peace Corps to help lead the way in reengaging with a world profoundly changed by COVID-19.

Let’s approach the work ahead with a sense of solidarity, not charity — and an awareness of both the privilege we have and the responsibility we share.

Along with the celebratory news stories from around the world, there have been a couple of opinion pieces that have raised the question as to whether the Peace Corps should continue to exist — including one in the Chicago Tribune, to which we responded. In fact, we asked the Peace Corps community that very question last summer, as we convened town halls and our Global Ideas Summit. We took as a touchstone words we heard from people in countries including Nepal, Guatemala, and Kenya: the work of Peace Corps is more important than ever, with a clear sense of solidarity, not charity; with an awareness of the privilege we have and the responsibility we share to our fellow citizens of the world; and the understanding that we can empower communities by working together. That holds true in whatever community we call home.

Unfinished Business: Read the stories from dozens of Volunteers who were evacuated in March 2020 — what they left behind in their communities, and the unfinished business they have — and Peace Corps has — around the world.