From Service to Advocacy and Back Again 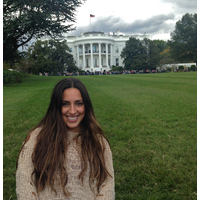 Back in November, the National Peace Corps Association (NPCA) collaborated with the Service Year Alliance to promote “Let Us Serve”, a nationwide call-in advocacy effort to prioritize service opportunities in the Fiscal Year 2017 budget. Our thanks to everyone who participated in this campaign, through which both Peace Corps and AmeriCorps alumni teamed up to provide personal testimony on the importance of service.

Among the many callers was Danna Kasom, our featured advocate for the month of December, whose upcoming Peace Corps placement will fulfill her goal of serving our nation both at home and abroad. It was a placement that required passion, patience and persistence.

From Service to Advocacy

Danna’s commitment to service began in 2014 while working at the Federal Emergency Management Agency's (FEMA) National Processing Service Center in Maryland, as a Disaster Survivor Assistance Specialist with AmeriCorps. Having grown up in the Detroit area, Kasom felt a personal connection to her work as she found herself registering citizens for federal aid who were effected by the August 2014 Detroit flood. She never anticipated how her service would lead her on a path towards advocacy.

In her position, Kasom oversaw the lengthy and oftentimes ineffective federal aid process for those whose homes and businesses had been devastated by flooding. She recalls how FEMA was slow to react to the need for working furnaces and winter supplies for those living in Detroit, “Considering…the time it took to get a damaged furnace replaced, and the time of year the disaster was declared in such a state like Michigan...left many Detroiters without heat for the months of October, November, and December.”

Discontent with how FEMA handled the disaster, Danna felt responsible to do more for her hometown. “I was unsatisfied and curious with the way something was being handled and reached out to a policy maker at FEMA Headquarters to seek answers.” Instances like this kick-started Kasom’s interests in advocacy.

Another reason for her interest in advocacy?  Despite her strong credentials, Danna was among thousands of Peace Corps applicants who - despite being qualified for service - were not selected because of limited funding. That didn't stop her from trying, and that's what brought her to Washington.

Before an internship with NPCA's advocacy program, Danna spent time interning on Capitol Hill for the offices of congressmen Dan Benishek (R-MI) and Sam Johnson (R-TX). She is no stranger to how advocacy works and how even one person’s voice has the capacity to influence legislation. Danna’s participation during NPCA's National Day of Action last March perfectly exemplifies this. “I was delighted to hear that Congressman Benishek, whom I had previously interned for, had signed the Peace Corps funding Dear Colleague letter. In the meeting, I had explained the importance of the Peace Corps to the community of my alma mater, Michigan Tech.”  This marked the first time Congressman Benishek ever signed a Peace Corps funding letter and represents a prime example of successful advocacy in action.

Danna says advocacy efforts to support organizations like Peace Corps are crucial because they not only invest in young adults’ futures, but also provide a person-to-person cultural exchange that fosters diplomacy and understanding. Since national service programs like Peace Corps have become increasingly competitive due to the highest number of applications in decades, this results in more qualified individuals being sent to serve. Advocacy to increase funding for the Peace Corps lends to this competitiveness and allows more competent people to promote peace, cultural understanding, and meet the development needs of host countries. At the same time, advocacy to expand service opportunities helps to make sure that thousands of qualified Peace Corps applicants are not turned away due to insufficient funds.

Danna advocates for Peace Corps and other national service programs because they “are investments in our country’s efforts to address our differences instead of exploit them." She says citizen advocacy presents solid opportunities for people to experience what "making a difference" entails.

There and Back Again

Danna’s transition from service to advocacy has led her back to her desire to serve others. This February, she will join the Peace Corps in Madagascar as a Community Health Advisor. We wish her the best of luck and our thanks for making organizations like Peace Corps the best they can be!