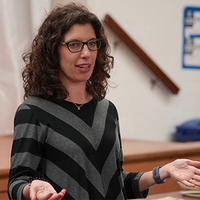 After years of gun violence declining in the U.S., it is again on the rise. Offering some hope of understanding — and ameliorating — it is this: Last year, after 25 years of Congress refusing to allow the Centers for Disease Control and Prevention to back research on gun violence, funding was authorized.

Emergency room physician Megan Ranney (Côte d’Ivoire 1998–2000) leads the Brown-Lifespan Center for Digital Health in Rhode Island. She was among the first wave of researchers whose work was funded by the CDC.

She brings a public health approach to gun violence. “We figure out, what are the risk factors?” she told NPR. “What protects people, all other things being equal, from getting hurt? And then we design and test interventions … We don’t put things in place just because they resonate with us emotionally. We do them because there’s science behind it.”

One place that worked before, she notes: getting three-point seat belts into cars.

This story appears in the 2021 Anniversary edition of WorldView magazine.