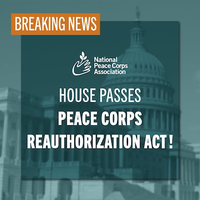 The House of Representatives has just passed the most sweeping Peace Corps legislation in a generation.

The bill’s lead author is Representative John Garamendi (D-CA), the sole Returned Peace Corps Volunteer (RPCV) in Congress; his co-author is Rep. Garret Graves (R-LA), a longtime Peace Corps champion. Their bipartisan leadership in support of the Peace Corps is a powerful testament to the enduring backing of the American people for volunteer service abroad. The strong bipartisan vote today only affirms this backing.

NPCA Board of Directors Chair John Lee Evans said upon the passage of the legislation: “This legislation does what many in the Peace Corps community have been demanding for years. It authorizes critical agency funding; increases readjustment allowance for RPCVs; extends transitory health care coverage for RPCVs; provides greater whistleblower protections for RPCVs; increases Non-Competitive Eligibility (NCE) for RPCVs; strengthens DEIA efforts at the Peace Corps; expands Peace Corps eligibility to include U.S. citizens who are American Samoan; provides a modest increase for Peace Corps Volunteers’ level of workers compensation; strengthens and extends the work of the Peace Corps’ Sexual Assault Advisory Council; and authorizes Virtual Service. These are the kinds of visionary reforms that will ensure a strong Peace Corps, one that advances American goals abroad and strengthens our peoples’ connections to the world.”

“These are the kinds of visionary reforms that will ensure a strong Peace Corps, one that advances American goals abroad and strengthens our peoples’ connections to the world.”

NPCA Interim President Dan Baker also said: “Today the RPCV community stands united in gratitude for the leadership shown by the Congress in getting this bill one step closer to the President’s desk. Our longtime House champions Rep. John Garamendi and Garret Graves deserve deep applause for their vision in moving this bill forward. I’d also like to thank the Chairman and Ranking Member of the House Foreign Affairs Committee, Rep. Gregory Meeks (D-NY) and Rep. Mike McCaul (R-TX) for their unwavering support, as well as Vice Chairs Rep. Tom Malinowski (D-NJ) and Rep. Ann Wagner (R-MO) for their strong commitment to a reformed and revitalized Peace Corps. This bill, which has companion legislation in the Senate moving forward, will strengthen Americans’ ability to serve around the world and the impact of Peace Corps’ efforts overall.”