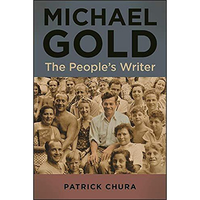 In the very last pages of his story of the life of Michael Gold, Patrick Chura writes: “Gold managed the challenge of proving the existence of another America, and how difficult it made his life.” An avowed and uncompromising Marxist, Gold has fallen from the literary canon and political history of America, despite his major contributions. In writing of him, Chura has also told the story of my parents and people like them, who dedicated their lives to making a better, more equitable nation, and suffered as a result of their beliefs and actions. In this biography he brings to light, as Gold did, an insidious, anti-democratic thread in America — a long historical strain of racism, classism, and anti-Semitism lying in wait for a leader to tap into that vein of ugliness.

Michael Gold was born in a tenement in 1893 as Itzok Isaac Granich (aka Irwin Granich), and he later wrote: “It was in a tenement that I first heard the sad music of humanity rise to the stars. The sky above the airshafts was all my sky, and the voices of the tenement neighbors in the airshaft were the voices of all my world. There in my suffering youth, I feverishly sought God and found Man.”

In order to become “Michael Gold” the author, Irwin Granich had to break with that old culture. Chura describes how it felt like suicide for Gold to separate himself from his parents and their assimilationist desires for prosperity and choose his own path, his “synthesis for life,” as an author and activist. This was his talent and his undoing. His major literary gift to the American canon was Jews without Money in 1930, an autobiographical proletarian novel about growing up in that world. It was enormously successful and translated into over a dozen languages. His only novel, it served as a model for political fiction and the touchstone and source of strength for his own critical writing and editorial influence in progressive and Marxist periodicals.

Gold’s strong views on political literature gained followers, but as time went on, the strength and some would say rigidity of his beliefs undercut his standing in that intellectual world. Chura doesn’t shrink from showing how Gold could turn against his fellow authors—even those whose work he had lauded on first encounter, like Ernest Hemingway and William Faulkner, whom he later determined didn’t live up to his notions of true proletarian and anti-racist writing. During the McCarthy Era, they retreated to safer ground; Gold deemed them mere visitors to the life of the poor and underprivileged.

This biography brings to light, as Michael Gold did, an insidious, anti-democratic thread in America — a long historical strain of racism, classism, and anti-Semitism lying in wait for a leader to tap into that vein of ugliness.

In Faulkner’s case, Gold’s aggrievement seems especially justified. In 1956, when Autherine Lucy attempted to integrate the University of Alabama, Faulkner the liberal Southerner walked back his support of Black Americans, retreating to a stance against “forced integration,” saying he would join with “that embattled white minority who are our blood and kin.” Shocked, Gold responded, “This surely is thinking with the blood … the sort of ‘thinking’ that loomed large in Nazi ideology, and has long kept the South in pauperism.”

In this stand, Gold linked racism, anti-Semitism, capitalism, and classism as the greatest of political evils. Gold’s criticism and opinion pieces also foretold of a progressive rigidity in promulgating what is correct and non-correct in proletariat storytelling, morphing into our current conundrum of demanding authenticity of class and racial credentials.

Nearer to my own life and family was the support Gold gave to the cooperative movement, which was thought of as a subversive, socialist concept in the 1930s and 1940s. My father, an economist, was a strong believer in and promulgator of co-ops as giving an economic power base for the “little guy” against the corporate state. So it was with great surprise that upon entering the Peace Corps I found myself in Puerto Rico in 1963 with a group training to work in Ecuador as specialists in co-operative movement credit unions. Gold might have been even more astonished to learn that this once-thought radical movement was being used in the fight against Communist inroads in Latin America.

My parents became an example of those progressive commitments when they decided to spend their honeymoon and first year of marriage in 1938 working in the Farm Security camp which John Steinbeck used as research for The Grapes of Wrath. They later went to work in the Tule Lake Japanese American High Security Camp to try to make a horrific situation tolerable for those who had been imprisoned there. But they, along with many progressives of their generation, were punished during the McCarthy period and accused of being Communists, resulting in their loss of livelihood and vocation.

Signing up for the Peace Corps brought it home to me. I remember my father’s distress when the FBI walked from house to house in our neighborhood asking about our family, in preparation for deciding whether the Peace Corps would accept my application for service. My father feared that the attacks on him during the McCarthy witch hunts would ruin my possibility of following my dream. It’s a tribute to the Peace Corps they judged me solely on my accomplishments.

In vividly bringing to us the life and struggles of Michael Gold, Chura has told the inside story of “another America” — one in which those of us who grew up in the 1940s and 1950s were fearful that the political secrets of our parents would be revealed to our more conventional playmates and the surrounding community.

In addition to a mastery of research, synthesis, analysis, compassion, and fluid prose in vividly bringing to us the life and struggles of Michael Gold, Chura has told the inside story of “another America” — one in which those of us who grew up in the 1940s and 1950s were fearful that the political secrets of our parents would be revealed to our more conventional playmates and the surrounding community.

Patrick Chura himself served as a Volunteer in Lithuania 1992–94 and is a professor of English at University of Akron, where he teaches 19th- and 20th-century American literature and cultural studies. In introducing Gold’s family life into the narrative, Chura lets the reader see that political activists of that time — like Gold and like my parents — loved their children and tried to protect us, with as much commitment as they invested in making our country a better place for all Americans.

This review originally appeared on Peace Corps Worldwide and appears in the Spring-Summer 2022 edition of WorldView magazine.

Marnie Mueller served as a Volunteer in Ecuador 1963–65. She is the author of three novels, including The Climate of the Country, which takes place in the Tule Lake Japanese American Internment Camp in Northern California.