Michael E. O’Hanlon Has Counseled ‘Resolute Restraint’ in an Age of Peace. But Has That Age Come to an End? 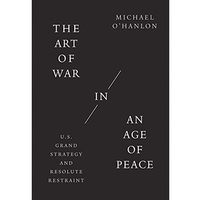 The Art of War in an Age of Peace

Published last year, Michael E. O’Hanlon’s most recent volume of strategy recommendations for U.S. global engagement has a title that’s been overtaken by events: In this “age of peace,” Russia has launched the largest invasion of another country since World War II. The gist of O’Hanlon’s counsel is “resolute restraint” with “an equal emphasis on both words.” That means avoiding overextension without retrenchment; either would make the world less stable and more dangerous. How does that counsel square with the current U.S. grand strategy? Essentially, there hasn’t been a consensus on one since the end of the Cold War, O’Hanlon argues. That’s the problem.

“Restraint should characterize the nation’s decisions on the use of force, including whether to go to war and whether to escalate once involved in combat,” he writes. Resoluteness, in addition to defining commitments to the security interests of allies, “should also characterize the country’s commitment to a global rules-based order that promotes interdependence among nations while strongly opposing interstate conflict or the pursuit of territorial aggrandizement by other powers. We can be more patient, and accept incremental progress, on building a more liberal order (featuring more democracies and greater universal respect for human rights). The liberal or progressive agenda can and should be pursued but largely through diplomatic and other soft-power instruments of statecraft.”

But as 2022 has made clear, the Putin regime explicitly intends to upend that rules-based order.

The U.S. has a responsibility to provide leadership, O’Hanlon notes, “guided by moral principles, strong institutions in Washington and throughout the country, a supportive citizenry, and good judgment on the part of leaders.” Yet he acknowledges that governments — including that of the United States — “can still make major mistakes ... in situations characterized by sycophantic aides, groupthink, or narcissistic leaders.”

Michael O’Hanlon adds “a second dimension of 4+1 threats,” which are “nuclear, biological and pandemic, digital, climactic, and internal-societal dangers ... The last on the list is America’s own social and economic and political cohesion.”

O’Hanlon is a fellow at the Brookings Institution and served as a Peace Corps Volunteer in the former Zaire, now the Democratic Republic of the Congo, 1982–84. Writing in Foreign Affairs, Lawrence D. Freedman suggests this book “could serve as a guide for U.S. President Joe Biden’s national security team as they prepare for the challenges of the next few years.” Those challenges, as O’Hanlon outlines, include the “4+1” list the Pentagon has identified: Russia, China, North Korea, Iran, and transnational violent extremism. O’Hanlon adds “a second dimension of 4+1 threats,” which are “nuclear, biological and pandemic, digital, climactic, and internal-societal dangers ... The last on the list is America’s own social and economic and political cohesion.”

That last one is the wild card in dealing with everything else on both lists. And perhaps it holds the key to whether peace can again define this new era we’re entering. Months before Putin amassed 130,00-plus troops on the borders of Ukraine, O’Hanlon assessed, “The world is becoming more dangerous again today.” Indeed, O’Hanlon has more than a little to say about Russia, and where a policy of resolute restraint might guide actions taken by the United States, NATO, and the European Union. “A strategy of deterrence by punishment can still work,” he argued, notiing, “So far at least, there are no brazen invasions of huge landmasses.”

But now there have been exactly such a brazen invasion — one that has wrought destruction unlike anything Europe has seen since the Second World War. And we have already seen atrocities that give lie to the mantra “never again.”

In the opening pages of his book, O’Hanlon cites President Kennedy’s estimation that “there could be 20 nuclear-weapons states by the mid-1960s and perhaps as many as 25 by the 1970s.” But, Hanlon notes, “Two decades into the 21st century, there are only nine countries in possession of the bomb.” One of them is of course Russia, which makes great power conflict particularly fraught. One of them used to be Ukraine — which gave up its nuclear arsenal in the mid-1990s in exchange for security and territorial assurances by the U.S. and Russia. That’s one reason, O’Hanlon and many others note, we owe a debt of gratitude — and responsibility — to Ukraine.

A shorter version of this review appears in the special 2022 Books Edition of WorldView magazine. This story was updated April 30, 2022.