Understanding a New Meaning of Home 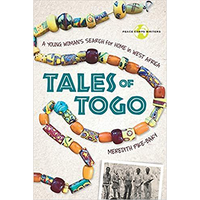 A Young Woman’s Search for Home in West Africa

This candid and heartfelt memoir chronicles the twists and turns, the ups and downs, and the sometimes sideways arc of Meredith Pike-Baky’s time teaching English and living in Togo in the early 1970s. Eager to escape political turmoil in the U.S., she finds in Togo a nation “in the beginning stages of delayed independence, having declared an end to French rule a decade earlier ... on the threshold of a new era, a heady, hopeful time for both of us.”

During training in Lomé, she aspires to get “so good at French and the local languages that people wouldn’t know I was American.” She learns some humility, too — and discovers one can never completely adopt another culture as one’s own, certainly not in the short space of two years. Teaching at Collège Adèle, a Catholic secondary school for girls in the north of Togo, she enriches the curriculum with songs, games, visual aids, projects, and field trips, making English come alive for her students.

“My Togolese friends taught me the magic of storytelling in order to teach, to learn, to share."

One insight she gains: “I’d seen the universe in my small West African community. Differences were not obstacles to respect and affection.” Another, she says, is recognizing that “home wasn’t a place, a certain kind of family, a fixed professional role, or an established and protective ring of friends. It had to be a gentle urgency and quiet confidence in my seeking — trusting that each choice, despite the inevitable waves of distress, anxiety, and exclusion, would carry me forward to a sense, no matter how fleeting, of home.” And perhaps most important of all: “My Togolese friends taught me the magic of storytelling in order to teach, to learn, to share."

Bill Preston served as a Peace Corps Volunteer in Thailand 1977–80. This review is adapted from one originally published by Peace Corps Worldwide.