How People Experience Idealism, Why It Dies, and Why That Matters 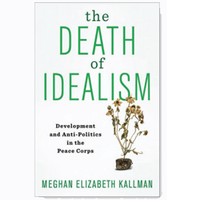 The Death of Idealism

Development and Anti-Politics in the Peace Corps

You might surmise from its title that this is not a book that casts the Peace Corps experience in a particularly rosy light. You would be right, sort of. But Meghan Elizabeth Kallman is not trying to argue that the Peace Corps is good or bad. Rather, she writes, “The questions of how people experience idealism, why it dies, and why that matters are the central puzzle of this book.”

Kallman is an assistant professor at the School for Global Inclusion and Social Development at the University of Massachusetts, Boston. She conducted hundreds of surveys and dozens of interviews, and visited Peace Corps programs in three countries. She documents some positive outcomes: Volunteers gaining understanding of parts of the world; forging deep friendships; seeking out work in public service. But, she argues, her research shows returning Volunteers “have lost their idealism, replacing it not with a critical or structural analysis but with a kind of cynicism and emotional disengagement that is unique and consequential in the way that it alters their politics.”

Too often, Kallman says, efforts to “professionalize” work in global development and Peace Corps in particular instead lead to “proceduralizing” the work, which “produces a sense of disengagement and muffles their idealism.”

That hardly sounds good. Though for those whose Peace Corps service has led them to understand the dynamics of flawed systems on a truly human level — including economic policies, political corruption, or journalism as practiced by reporters who parachute in for a quick hit — and for whom idealism remains a bright flame, well, they might wonder what’s going on here. Particularly interesting is how Kallman traces the way efforts to “professionalize” work in global development and Peace Corps in particular instead lead to “proceduralizing” the work, which “produces a sense of disengagement and muffles their idealism.” (There’s a form for that!)

That’s a critique to take note of for those interested in seeing the Peace Corps be its best. Which is part of the impetus behind recommendations Kallman offers, including a call for the Peace Corps and similar organizations to create “spaces for collective sense making, conversation, and meaning making that focus on larger questions of nationality, identity, history, and development.” It bears noting that when Kallman visits a Peace Corps program in an unnamed country in Eastern Europe, she is inspired by seeing collective sense making play out during an in-service conference.

The Peace Corps has a mission to cultivate understanding and peace. By embracing reforms, Kallman argues, “it may also be able to deconstruct and reconstruct norms within other American institutions.”

This book was completed before Volunteers were evacuated from around the world in 2020 because of COVID-19. There are threads familiar to those who have been part of the far-reaching conversations since — or who have read the community-driven report “Peace Corps Connect to the Future,” published by National Peace Corps Association. Kallman writes: “It bears acknowledging — repeatedly, in fact — just how difficult it is for any person or organization to fully embrace justice and sustainable human and social development in a world structured by colonialism, racism, nationalism, and inequality, not to mention the pressures of rationalization and legitimacy.” However, Kallman observes, the Peace Corps, “whose explicit mission is to cultivate understanding and peace, is in a unique position to embrace reforms and rethink itself. By doing so, moreover, it may also be able to deconstruct and reconstruct norms within other American institutions.”