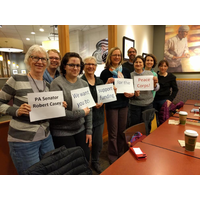 In Pittsburgh, Katie Haas Conrad (Sierra Leone 2010-12) says "We have to work to continue to educate our legislators of the importance of the (Peace Corps) or we will not be able to send professionals to interested countries." That's why for the second year in a row, Katie is spearheading a letter writing event with the Pittsburgh Area Peace Corps Association in March as part of NPCA's National Days of Action.

Nearly 1,000 miles due west in Nebraska, Andrea Kruse (Bulgaria 2008-10) is making plans to organize a district meeting with the Lincoln office of Senator Ben Sasse. "Years ago I was asked if I wanted to join a district meeting with some fellow Minnesota RPCVs and said yes...From that meeting, I was told by a staffer to keep coming even if the congresswoman was a Peace Corps champion, because power in numbers and the personal stories have the impact."

Not everyone can come to Capitol Hill to be an advocates on key Peace Corps issues. BUT, everyone can take a moment in March to participate in National Days of Action solidarity events being planned around the country.

Along with Pittsburgh and Lincoln, we are hearing of plans starting to emerge all around! Buffalo, New York and Portland, Maine, northern New Mexico and Hawaii!

Ready to commit to organizing an event in your area? Fill out the form linked below so we can start working with you and promoting your efforts! https://docs.google.com/forms/d/e/1FAIpQLSc7h6nyJ73bvrfG9oh6HMCpowXyPC7kX1zgaBUosB2yBb-_BQ/viewform

Look for updates in the near future and help us secure at least one Days of Action event in every state!