Make It Cool, Make It Last 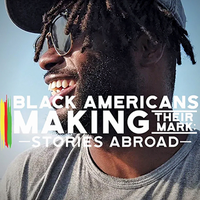 Take a community-based approach to service at home and around the world. And learn from Black Americans making their mark abroad.

By Jerome Moore [as told to Jake Arce]

My interest in community development started while I was growing up in Nashville, Tennessee. It began with a volunteering organization called The Contributor, which helps homeless neighbors establish their own microbusiness and work their way into housing  through selling an award-winning street paper. The work really inspired me to continue volunteering in college and discover how I can better benefit my community — especially to make an impact working against systemic oppression.

I later became interested in ways that community development and community-based projects can make an impact in the global sphere. This ambition, combined with my desire to learn a new language, is part of what motivated me to submit an application for the Peace Corps. I served in Paraguay 2015–17. It was the first time I had been outside of the country, and I can truly say that the Peace Corps has shaped my life for the better and inspired me to do the projects that I am doing today.

Peace Corps gives you a completely different perspective on what it means to be an American — and how our identity can be viewed through a global lens. And it provides a new perspective on global development and making a difference in the communities you serve.

The Peace Corps brings out a sense of vulnerability, in terms of learning a new language and being immersed in a different culture. It gives you a completely different perspective on what it means to be an American — and how our identity can be viewed through a global lens. And it provides a new perspective on global development and making a difference in the communities you serve.

I came from a lower middle class community, with many people who weren’t aware of what was going on outside of their state and did not know about opportunities related to public service. There weren’t any advertisements I saw on television, or within my community; that made it difficult to discover opportunities with Peace Corps — and public service in general. There are also so many things to worry about financially that traveling outside of the country isn’t something many would typically consider. One of the few opportunities would be the military — and that’s not something everyone would want to pursue.

It’s important to spread the message so communities across the globe know how they can contribute with public service initiatives, including the Peace Corps, to promote cohesion and character development. This is something that I’m really passionate about, and I want to spread the word about the impact you can make and the connections you can form.

I like to utilize a needs assessment to develop goals; what the community needs differs depending on the setting. Needs may be completely different in Nashville, Tennessee, in comparison to Iturbe, Paraguay. Along with the projects I’ve already undertaken, this summer I’m launching a Black Youth Abroad Curriculum that introduces Black youth to opportunities outside the United States. 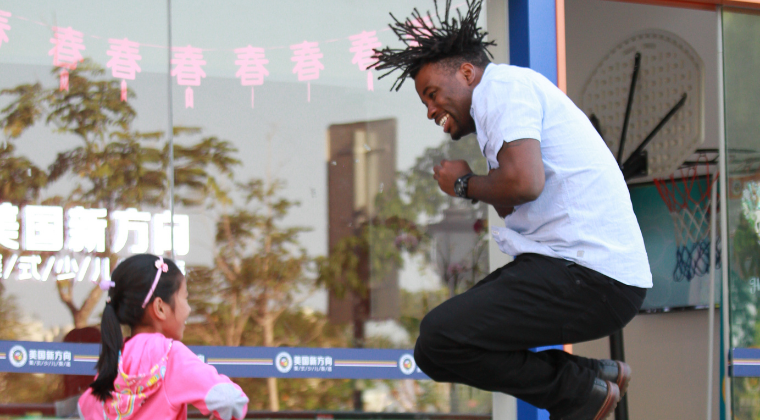 Making an impact both globally and domestically has motivated me to pursue work in community building on a large scale. Several years ago I founded Community Changers, an organization to bring youth to partake in community-based initiatives—and discuss lifestyles of Black people living in the United States and abroad. We have three separate projects to fulfill our community-based goals.

COMMUNITY PROJECTS cover hands-on development work in areas around the world: Birds Nest, in Xiamen, China; The Contributor, in Nashville, Tennessee; and All African People’s Development and Empowerment Project in Huntsville, Alabama. The purpose is to add a more cool and flavorful approach to community-based projects.

DEEP DISH CONVERSATIONS is a laid-back, discussion-based video series: I sit down with people at Gino’s East Pizza to discuss social issues and how those impact their life—all over a slice of pizza. We look for relatable ways to further community development.

“BLACK AMERICANS MAKING THEIR MARK: STORIES ABROAD” is a podcast and video series where Black Americans discuss their personal experience in global settings. This has given me an opportunity to highlight serving as a Peace Corps Volunteer in Paraguay, and traveling to Costa Rica and China. There is often a sense that all Black people around the world deal with the same issues, but this is not true. We are the majority skin color around the world, but we all have different experiences, whether you are Black in the United States or the U.K., you’re Black in the Caribbean or on the continent of Africa. We look to highlight our specific experiences as Black Americans and address the rare cases Black Americans are shown traveling outside the United States. We hope to provide advice and motivate other Black Americans to travel abroad—through Peace Corps or through personal exploration. You can’t get that knowledge unless you leave the United States and immerse yourself in another community.

Jerome Moore’s podcast “Black Americans Making Their Mark: Stories Abroad” seeks to inform, inspire, and fill a void in media representation. Exploring the diversity of Black experiences around the world also means tackling misperceptions and stereotypes — and the role all of us have in reversing those. Big in the mix: Black Returned Peace Corps Volunteers. Here are pieces of three conversations. 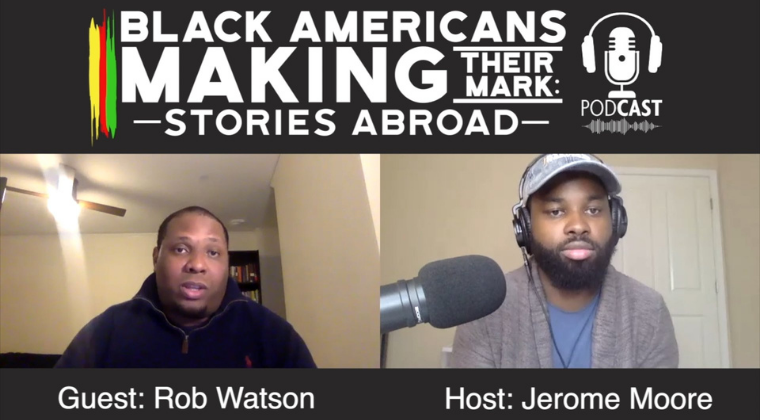 Beginnings: “My story around service starts with my parents doing service work in different ways: my mom in a faith-based community, my stepfather as a corrections officer, and my dad went from being a community organizer to a principal to a superintendent in schools, and he worked in group homes … Peace Corps was the chance to take my conception of justice, service, education, antipoverty, and civic engagement to the international context.”

Realities: “Especially in recent times, I’m seeing the Peace Corps take more of a deliberate role in thinking about issues of racial justice in the United States, the realities of Volunteers of different races — but also sexual orientations and everything in between.” 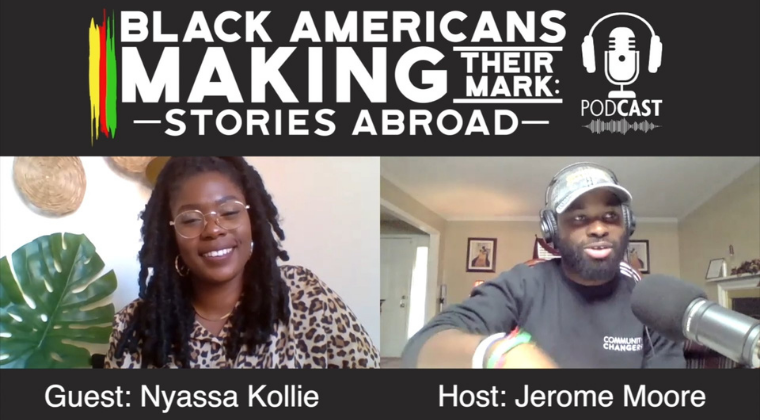 In Liberia, Nyassa Kollie’s parents were taught by a Peace Corps Volunteer. Now she helps others understand what service might mean for their lives.

Foundations: “My parents are Liberian immigrants and have always pushed education. That Volunteer instilled this love of education — but also the sense, ‘Hey, I can do what I set my mind to.’ What makes Peace Corps so different is that we’re an agency about relationships and people.”

Represent: “I’m a regional recruiter for the Chicagoland area, so I have the pleasure to talk about the Peace Corps all the time — with people who could be interested and people who never thought about Peace Corps … They say every recruiter is a diversity recruiter. On top of that, we have nationwide diversity recruiters who specifically target HBCUs or predominantly Asian institutions … We want our Volunteers to reflect the United States. Returned Volunteers need to feel more emboldened to share their story, because you go back to your hometown and talk to people you know, who can say, ‘Jerome graduated from here and this is something I want to do.’” 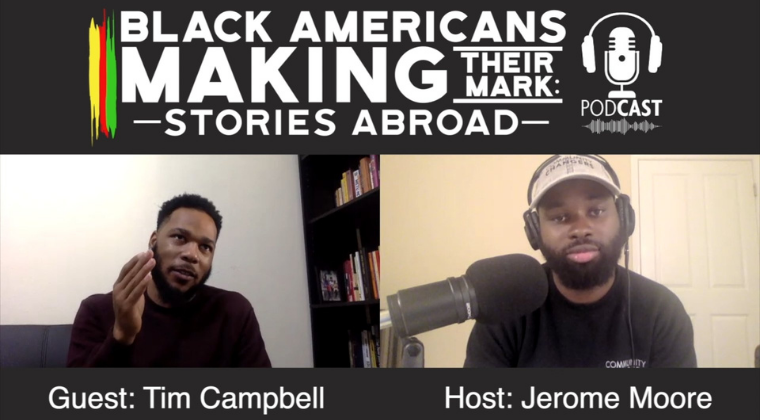 A native of Little Rock, Campbell was the first person in his family to graduate from college. In summer 2020 he led peaceful protests against the killing of George Floyd and other Black Americans and convened meetings with the governor to discuss community policing and training manuals. In June he was appointed to a task force to reform policing.

Jake Arce is a graduate student in the School of International Service at American University. He picked up work on this story begun by Del Wood, who studies at University of Southern California.