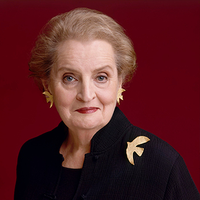 In her childhood, her family fled tyranny — twice. She went on to become the first woman to serve as secretary of state of the United States.

Madeleine Albright was the first woman to serve as secretary of state of the United States. Appointed by President Bill Clinton in January 1997, she had just served as U.S. ambassador to the United Nations. She brought experience as a professor and a mother, she noted — both of which she said helped her speak plainly.

Before that first year as SECSTATE was complete, she had sworn in 32 Peace Corps Volunteers in Zimbabwe, during a seven-nation tour of Africa. A few months later she was in Kyiv, Ukraine, where I had established an office to direct academic exchanges for the U.S. Embassy. Speaking to Ukrainian exchange alumni, Peace Corps Volunteers, and others, she spoke of the danger of resignation and apathy in democracy. “The political choices you make will make a difference in your lives,” she counseled.

It so happened that this conversation took place almost exactly 50 years after a communist coup in her native Czechoslovakia. Cast forward three decades, and amid a time democratic institutions were being undermined here, she would publish a book for U.S. audiences, Fascism: A Warning.

She was personally acquainted with the dangers of authoritarianism. Daughter of Czech diplomat Josef Korbel, she was born Marie Jana Korbelová in 1937. She and her family fled Czechoslovakia in response to the Nazi invasion when little Madlenka was not yet two years old. After the 1948 Communist coup, the family took refuge abroad once more. Her parents also kept a secret from their daughter, one that she didn’t learn until many decades later: She was raised Roman Catholic, but her parents had converted from Judaism after the Nazi takeover. Family members — including three of her grandparents — perished in Auschwitz and other camps. She understood personally the importance of not giving even casual anti-Semitism a pass, even amid policy disagreements with Israel.

As secretary of state, she often spoke of the U.S. as “the indispensable nation.” She became a U.S. citizen at the age of 20 and lauded the generosity of the country — and its responsibilities. She was a staunch advocate for NATO and, as many in the Peace Corps community remember, contributed to the anthology The Great Adventure. For many years she was on the faculty at Georgetown University and taught students the foreign policy toolbox. She died in March at age 84 — one month after she published a piece titled “Putin is Making a Historic Mistake.”