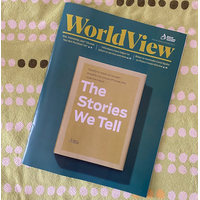 Letters, emails, LinkedIn and Instagram comments, Facebook posts, tweets, and other comments. We’re happy to continue the conversation here and our social media platforms. One way to write us: worldview@peacecorpsconnect.org

I want to congratulate you and the whole NPCA team for producing an outstanding magazine. Yesterday I read through the two most recent issues cover to cover and found the content to be rich and very informative. You should be proud of the role that WorldView plays in supporting and connecting the Peace Corps community.

I have been reading your magazine for a while. I thought your last magazine was just wonderful — as were many before that — and want to congratulate you.

You should be proud of the role that WorldView plays in supporting and connecting the Peace Corps community.

Congratulations on your special books edition. I found the quiet time to read this issue (as I try to read most issues of WorldView) from cover to cover. Your page 11 article on Ukraine is powerful and personal. I will be sharing it with a Ukrainian friend who is a former choir director at UC Berkeley and organized two concerts of Ukrainian religious and folk music to raise funds for the country of her origins. One was hosted here at our parish; the other at the concert hall on campus.

I also need to thank you for the Book Locker and your extraordinary overviews of the books you reviewed. I joined Peace Corps (India 30, 1966–68) at the height of the idealism and call to service that brought PC into existence and led to its times of great success and accomplishment. But as transformative as the experience was for me, and as consequential as I think it was for some of the people with whom we worked, I have to see it as a small contribution to the larger movement of a nation and its people.

I was part of a series of Peace Corps groups that were sent to Andhra Pradesh in south India to help high school science teachers teach using an investigative approach in place of the old British “learn by rote” Cambridge exam approach. Since commercial laboratory equipment was expensive and therefore unavailable to small village level schools, we taught ways of improvising laboratory apparatus using materials available in any village setting.

The impact of this effort is impossible to measure concretely, but in the years following our service, Andhra went from scoring very low on the Indian National Science test to being among the highest in India, I’ve been told. Whatever the contribution of Peace Corps, it was the Indians who took the resources that were made available to them and turned them into something transformative.

The cover line of the most recent edition of WorldView, “The Stories We Tell,” fits well with my own embrace of my PC experience. We went to India and did what we were invited to do, and things changed. We may have been only a small part of the cause, but change definitely happened in a remarkably good way, and so we rejoice with and for the people we served.

Great job on the latest PC mag. Especially liked all the books.

The Book Locker and the Third Goal 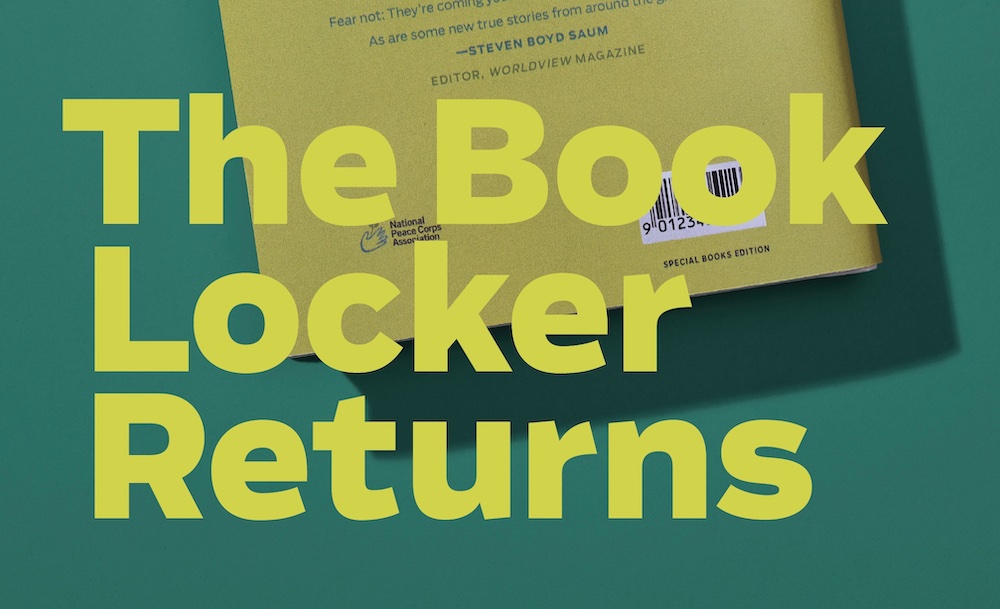 During the first few years of the Peace Corps, Volunteers were given book lockers. Mine included a copy of War and Peace, which I still have — and still have not read. Among books in the lockers were Animal Farm, Learning English, the James Beard Cookbook, Benjamin Spock’s Baby and Child Care, and The Wonderful World of Peanuts by Charles Schultz. So it is fitting that at the Ohio State University we celebrated the 60th anniversary of the Peace Corps this spring in the Jean and Charles Schultz Lecture Hall.

In the early 1960s, a group of Peace Corps parents in Columbus established the Columbus Peace Corps Service Council — either the first or second one in the U.S. In part, their purpose was to help fulfill the third goal of the Peace Corps: To help promote a better understanding among Americans of other peoples of the world. To do this, they set about informing the community about Peace Corps through news stories, booths at fairs, festivals and conferences, TV interviews, and exhibits at the OSU library, among many other activities.

But I’ve always thought another reason for those first parent-organized service councils was to try to understand where their children had gone and what exactly they were doing there. As a result of those first service councils, similar groups were formed in every state. Today there are four affiliate groups of the National Peace Corps Association in Ohio.

For the public, for those considering joining the Peace Corps, and even for returned Volunteers, the Third Goal has always been a bit of an afterthought. It’s more fun to talk about what we did instead of what we need to do now to strengthen, promote, and expand the Peace Corps. Whether you have just been accepted, if you’ve recently returned, or if you’ve been home a few years: It is your voice that will keep Peace Corps alive and keep Volunteers in the field.

The Peace Corps and Rotary International 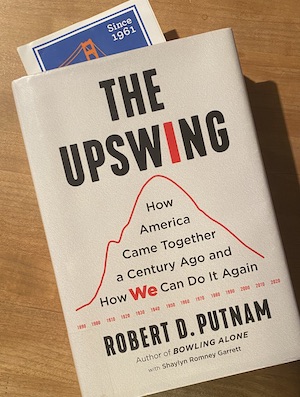 In the special 60th anniversary edition of WorldView, Shaylyn Romney Garrett, co-author with Robert Putnam of The Upswing: How American Came together a Century Ago and How We can Do It Again, posits a policy prescription for the administration “that would help us move to an ‘upswing’ (a return to the ‘we’ of service to others, vs. the ‘I’ of self-service that has prevailed since the 1960s). National Service is my absolute go-to answer.” As a Returned Peace Corps Volunteer and Rotarian for 27 years, I can attest that we already have vibrant national and international service organizations.

There have been many calls for a national service; AmeriCorps, the domestic equivalent of the Peace Corps, has been a partial answer. Gen. Stanley McChrystal, a former commander of international forces in Afghanistan and head of the “Serve America. Together.” campaign, called on the president to invest in universal national service for 1 million young Americans annually as “the most important strategy we can implement to ensure the strength and security of our nation.” But the foremost national and international service organization is Rotary International, dedicated to the motto “Service Above Self.”

As of 2006, Rotary had more than 1.4 million members in over 36,000 clubs among 200 countries and geographical areas. I served as a Peace Corps Volunteer in Turkey and have been able to continue my community development work as a Rotarian; I have been involved in countless local community projects and international projects, such as in eastern Democratic Republic of Congo assisting in its recovery from the various civil wars it suffered. More important, I am a founding board member of Partnering For Peace, an NPCA affiliate that has joined with the Peace Corps to support Peace Corps projects worldwide. That is a natural partnership of like minds and hearts, committed to both national and international service. It is time to acknowledge Rotary International’s role in both foreign and domestic public service for its growth and vitality. It is a testament to how well Rotarians and the Peace Corps Community are already working together. I already see this “upswing” happening for millions worldwide, as well as in the U.S.

In the print edition, the review of On Corruption in America by Sarah Chayes (p. 22) included a brief excerpt in italics with one extra line in italics at the end: “There is no comforting answer to that.” Those were our words, not hers. Sorry about that.