Letters: Readers Respond to the Winter 2021 edition of WorldView 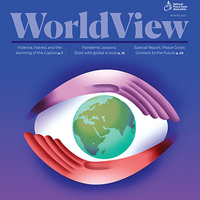 Letters, emails, LinkedIn and Instagram comments, Facebook posts, tweets, and other missives: Readers respond to the stories in words and images in the winter 2021 edition of WorldView. We’re happy to continue the conversation here and on all those nifty social media platforms. One way to write us: worldview@peacecorpsconnect.org

The pandemic offers a unique opportunity for Peace Corps to critically evaluate programs. It’s tempting to just send back returned Volunteers to previous assignments—and probably easiest from utilizing appropriated funding. But I hope there will be a pause, and a rethinking about how best to use the skills and idealism of some of America’s best.

WorldView is spectacular! I just received the winter issue. Wow! I get a lot of magazines, but WorldView is just head and shoulders above all of them.

Important connections — the NPCA email newsletter, WorldView. Connections make a difference! My Peace Corps experience 55 years ago has strengthened in my perspectives and actions over the years. Always learning, always valuable.

After perusing the latest WorldView, I was wondering if you had considered a letter to the editor campaign in which returned PCVs would highlight Peace Corps’ 60th anniversary and explain the current status of the program and plans to return Volunteers to the field.

In addition, have you considered contacting current and past presidents and their spouses, inviting them to become patrons of the Peace Corps and advocates of its work, while requesting their support with Congress and the public at large? Many thanks for your great efforts in keeping alive and well the ideals of the Peace Corps that inspired me and so many others to serve. 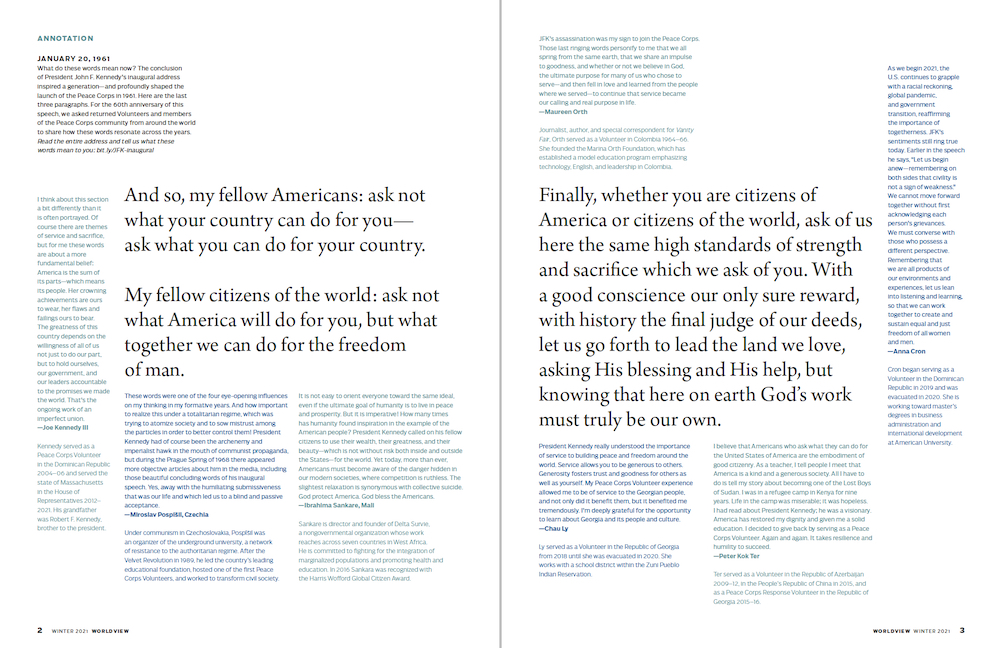 I watched and heard the words while working as a nurse aide in January ’62. In April I sent an inquiry, sent in the application, trained that summer, and was in country by fall. Still the best thing I ever did. Would do it again, but I’m 77!

I am dumbfounded why you did not include this paragraph from the inaugural in your article:

To those people in the huts and villages of half the globe struggling to break the bonds of mass misery, we pledge our best efforts to help them help themselves, for whatever period is required — not because the communists may be doing it, not because we seek their votes, but because it is right. If a free society cannot help the many who are poor, it cannot save the few who are rich.

Within an inaugural address that people would parse as if it were the Gettysburg address, it would be difficult not to read Kennedy’s pledge as a statement to the world of why he would be creating a “Peace Corps” … which he did by executive order about 45 days later. Within the confines of two sentences, Kennedy spoke directly to what many then called the “Third World” and set out the principles of the pledge he was making and what would govern a Peace Corps: We would come not as “helpers” but as equals, “to help them help themselves,” not limited by an arbitrary time requirement, but “for whatever period is required”… and most important we come not out of some self-interest but out of the moral responsibility that comes from being a citizen of the world … because it is right.

Excellent point and taken. Check out the full address here, along with more annotations by Gordon Radley, Editor Emeritus David Arnold, and others. —Ed.

Love her: She swore in our L4 group in Peace Corps Response Liberia! She will be a fantastic U.S. Ambassador to the U.N., bringing compassion, intelligence, experience, down-to-earth warmth, talent, and a diverse perspective.

I served in Somalia 9. We did our initial training at Leland College in Baker, Louisiana — probably when Linda was a little girl. I’d like to think we might have left an impression on her about Peace Corps.

She was Chief of Mission in Liberia when I was there serving as director of management and operations for Peace Corps reopening the post. She is an extraordinary person and I am glad she is in the position she is in now.

I worked for her at State and she is one of the most incredible human beings I’ve ever met.

Anne Rimoin: “A matter of life and death”

Thank you, Anne, for your informative and thoughtful article. Thank you for articulating so eloquently not only the significance of learning to listen to our community, but also how the Peace Corps experience teaches us that vital lesson.

Peace Corps Connect to the Future

After reading the section of the report focused on “Reexamining the Peace Corps’ Second and Third Goals,” I find myself in complete and enthusiastic agreement. I’ve served three complete 27-month tours as a PCV. Being an educator by profession and assigned to the education sector, the First Goal was for me pretty much routine. I loved it — but the real excitement and life-changing experiences were reflected in the Second and Third Goals, which profoundly reflect the humanitarian values of our society.

I have an everlasting love for the language, the culture, and the people of Colombia. Why? The Second and Third Goals of the Peace Corps and the friendships I made. My two-plus years in Morocco gave me an even deeper awareness of our human commonalities. And living in Quito, Ecuador, opened up new perspectives for me on what it means to be human, thanks to lasting friendships with many Ecuadorian Indigenous people, organic farmers, and vegan restaurant owners.

I can’t emphasize enough the immense value of the Peace Corps as a human endeavor, especially in light of the technological dehumanization which we all are having to deal with.

At the present time, I’m waiting and hoping for a clearance from the Office of Medical Services and another assignment. I know we’re all in a sort of limbo until COVID subsides.

These comments appear in the spring 2021 edition of WorldView magazine. Sign up for a print subscription by joining National Peace Corps Association. You can also download the WorldView App for free here: worldviewmagazine.org