Ken Rutherford Played a Key Role with the International Campaign to Ban Landmines. Now He Looks at How Mines Were First Widely Deployed. 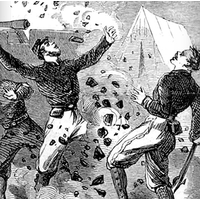 Landmines in the Civil War

Illustration from the cover of America’s Buried History

There are tens of millions of land mines buried in dozens of countries around the world. Each year thousands of civilians are maimed and killed by them — despite the 1997 treaty to ban antipersonnel mines, an agreement to which 164 countries are party. Political scientist Ken Rutherford, who served as a Peace Corps Volunteer in Mauritania 1987–89, knows firsthand how cruel those weapons can be.

While working for the International Rescue Committee in Somalia in 1993, Rutherford was in a vehicle that struck a land mine. He was severely injured; one leg had to be amputated. Several years later, so did the other. He co-founded the Landmine Survivors Network, now known as Survivor Corps, to help communities recover from war and break the cycle of violence. At the time, land mines killed some 26,000 people a year. Driving home that this is not a strictly military issue but a humanitarian one, Rutherford played a key role with the International Campaign to Ban Landmines, which was awarded the Nobel Peace Prize in 1997.

Yet these weapons continue to cause suffering and death. Just this March, amid the Russian invasion of Ukraine, a Red Cross official discovered that Russian troops had mined a proposed humanitarian corridor from the city of Mariupol. Ukraine is a signatory to the convention banning land mines; Russia is not. (Nor is the U.S., though under President Obama the U.S. said it would stop using mines everywhere but the Korean Peninsula. In 2020, President Trump put mines back on the table for use anywhere.) 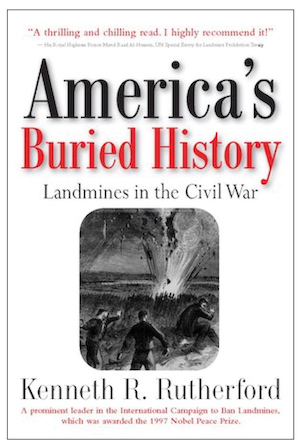 Take that as the present to which America’s Buried History is prologue. Rutherford delivers the first comprehensive analysis of the development and use of land mines in the U.S. Civil War, when they were first deployed on a widespread basis. Developed by Confederate General Gabriel Rains (who had experimented with explosive booby traps in wars against the Seminole people), mines were deployed across the Confederacy to compensate for a shortage of manpower and materiel. In response, Union generals at times turned the Confederate weapons upon those they had captured. Major Gen. George B. McClellan ordered Confederate “prisoners remove the mines at their own peril.” Generals Philip H. Sheridan and William T. Sherman ordered prisoners to march ahead of their own troops to identify or detonate land mines.

These weapons, initially lambasted as being “offenses against democracy and civilized warfare,” acquired an accepted place in arsenals around the world.

But these weapons, initially lambasted as being “offenses against democracy and civilized warfare,” acquired an accepted place in arsenals around the world. In his review for Peace Corps Worldwide, Paul Aertker describes this book as one written with “intensity and heart” and assesses, “With an empathetic pen, Rutherford illustrates the devastating and powerful effects of these newly invented ‘infernal machines.’”

More than 15 years ago, a Fulbright took Rutherford to the University of Jordan to teach politics and to research disability rights. In 2006, he participated in U.N. work to adopt the Convention on the Rights of Persons with Disabilities treaty, and in 2008 played a key role in the drafting of the Convention on Cluster Munitions treaty, which banned that category of weapons. While 100 countries have signed that treaty, the U.S. and Russia are not among them.

This review appears in the special 2022 Books Edition of WorldView magazine. Story updated May 2, 2022.