Susan Neyer Taught, and She Nurtured the Peace Corps Community in California, Nationally, and Beyond 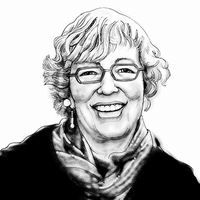 Soon after graduating Marquette University in Milwaukee, Susan Neyer left for Peace Corps service in the Philippines, working as a teacher trainer 1962–65. She earned a master’s in urban education from the University of Wisconsin–Milwaukee and went back to Peace Corps, training future teachers in Hawaii and then visiting them in Southeast Asia and the Pacific. She returned to Wisconsin and taught preschool to migrant workers’ children before moving to California to teach Spanish bilingual classes: in Orange County, then Berkeley and Oakland.

She met her husband Pete Johnson (India 1967–69) through NorCal in the mid1980s, and they enjoyed traveling together to many Peace Corps countries, where they would connect with staff and Volunteers. They married in 1993 in Yosemite and returned nearly every year. They also referred to their home as NPCA West, perhaps only half in jest.

Susan passed away in September after a three-year battle with cancer. For many years she and Pete were actively involved with the Northern California Peace Corps Association Grants Program, supporting projects around the world. Contributions to the program in her memory are welcome.