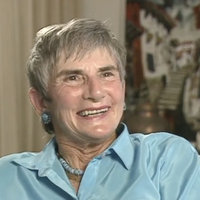 By Molly O’Brien and Tiffany James

Juliane M. Heyman (1925–2022) was born in the Free City of Danzig, which is now Gdansk, Poland. In 1938, Heyman and her family fled their home and spent the years that followed eluding Nazi soldiers before crossing the Atlantic to New York via a freighter in late 1941. Heyman graduated from Barnard College and obtained two master’s degrees, in international relations and library science, from the University of California, Berkeley. Directly recruited by Sargent Shriver and appointed by President Kennedy, Heyman joined the Peace Corps staff as its first female training officer 1961–66. Afterward she served as deputy of the Near East and South Asia Division of the Training Department, where she was responsible for designing and administering Volunteer training programs. She worked as a library advisor to many countries and as an international development consultant in educational and social projects throughout Africa, Asia, and Latin America. Heyman published a memoir titled From Rucksack to Backpack, exploring her travels, adventures, and life from the 1940s to the 1960s.

William H. Armstrong (1932–2022) was born in Louisville, Ohio. He received a bachelor’s in philosophy from Swarthmore College and a master’s of divinity from Union Theological Seminary before being ordained as a minister. In 1957, Armstrong moved with his wife, Gloria, to Philadelphia to serve at the Calvary United Church of Christ. During the nine years he spent with Calvary United Church, Armstrong oversaw the integration of its predominantly white congregation. Armstrong felt a calling to pastor and serve parishioners in neighborhoods in need. In 1964, Armstrong earned a master’s in sacred theology from the Lutheran Theological Seminary. A couple years later, Armstrong served as the associate director of the Peace Corps in Ethiopia before becoming the first director of the Peace Corps in Swaziland — now known as Eswatini. When he returned to the States in 1971, Armstrong spent more than two decades serving at Burton Congregational Church in Burton, Ohio, before retiring from ministry. Following his wife’s death, Armstrong continued his ministry to cast the light of God’s love to all the people who crossed his path.

Margaret E. Beshore Boonstra (2022) had a passion and dedication for working in the civil sector. After pursuing a bachelor's in government at Smith College, she moved to Washington, D.C., to start her career at the Department of Justice. Boonstra became a foreign service officer and was the only woman in her cohort. Expanding her career within the international world, Boonstra served as a program officer for Peace Corps in Brazil, Bolivia, and Uruguay; acting director of Peace Corps in Bolivia; and director of talent search for Peace Corps. Over the course of her career, she also served as vice consul in Panama and staff assistant to the assistant secretary of state. When she married in 1966, she left her career in diplomacy to join her diplomat husband at his various posts around the world. During that time, Boonstra seized every opportunity to learn new languages and make connections. When they returned to the United States in 1975, she started volunteering for schools and various other causes. Boonstra co-operated a private counseling service that assisted students and families with college searches. She was recognized by her alma mater and named “World’s Outstanding Smith Admissions Volunteer” for her passion for education. Boonstra never missed an opportunity to connect with communities abroad and share her many stories with her community.

Marla I. Bush (2022) served as a Peace Corps Volunteer in Chad 1968–70. She earned a master’s in African studies at American University and a master of social work from the University of California at Berkeley. She was a social worker at the Jerusalem Center for Child and Family Development in Jerusalem for a few years before pursuing a career with the Administration on Aging in the U.S. Department of Health and Human Services, where she eventually retired. In 2019, Bush’s dedication to the Peace Corps community inspired her to become an active volunteer for the Museum of the Peace Corps Experience (MPCE), where she quickly proved to be an integral part of the volunteer team by joining several MPCE committees. She served as a member of the working committee, tracking more than 450 monthly volunteer hours for museum volunteers; as a part of the collections team, working to organize items donated to the museum; and as a member of the exhibits team, helping with the planning of the exhibition called “Peace Corps at 60: Inside the Volunteer Experience.”

Barbara H. “Bobbie” Franklin (1946–2022), born in Buffalo, New York, grew up moving around the Midwest with her family before they settled in Louisville, when she was 14. After graduating from the University of Louisville, Franklin decided to travel in Europe with friends. Upon returning home, she taught special education for Jefferson County Public Schools. She accepted a job working as a nanny for a family in Denmark before traveling around the world to learn about Middle Eastern, Australian, Chinese, Japanese, and Mediterranean cultures. After returning to Louisville, Franklin joined the Peace Corps and was sent to Nicaragua in 1978. However, she was evacuated due to civil unrest. Undeterred, she continued her service in Guatemala 1978–80. After her Peace Corps service, Franklin decided to join the United Service Organizations (USO) and was assigned to the Marine Corps. During her tenure with USO, she worked with young children, organized entertainment and celebrity tours, and had the opportunity to live in Okinawa — where her father had been stationed during World War II. When Franklin returned to Louisville, she worked with theater and writing groups, engaging with youth through nonprofits and schools.